'If there were any clues, he hid them well'

Philip Markoff's friends knew him as a straight-arrow, shy and driven. Now he is an accused killer, and they wonder what they missed. 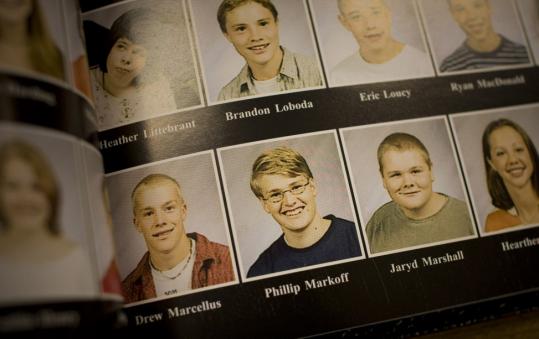 This story was reported by Globe staff members Stephanie Ebbert from New Jersey, Eric Moscowitz from New York, and Peter Schworm and by Globe correspondent Michelle Richinik. It was written by Schworm and Moskowitz.

They called him a "straight edge."

At the state university in Albany, Philip Markoff was known for the same discipline and intensity that had made him an academic star in high school. He logged long hours in labs and the library and carried a heavy course load that allowed him to graduate with honors a year early.

Amid the pressure, friends said, he had just one true release: Poker. All-night games, every weekend, that he took very seriously, indeed.

Markoff looked forward to the gatherings all week and talked about them a lot, according to several college friends interviewed by the Globe. The sessions were meant to be casual, but to Markoff they seemed more than that. While others joked or talked about sports, he insisted on concentrating on the cards and turned easygoing games into intense competitions.

He won often, but when he lost, he could be bitter, the friends said. Though the games were low-stakes, he hit losing streaks that cost him hundreds.

"He was wound pretty tight," said one college friend who sometimes took part in the weekly gambling sessions and who spoke on the condition his name not be published. "We'd want to take a break, to talk and hang out, or maybe go out for a while. But he'd just want to keep playing."

Markoff's intensity showed itself not only at the poker table and in his studies, the friends said, but also at parties, where he drank hard and went out of his way to debate politics, aggressively asserting his support for the Iraq war and gun rights with his more liberal classmates.

His friends wrote off his intensity at the time as the chaff of an unusually driven personality, one that put the goal of succeeding above most everything else.

But when they cast through their recollections for other clues, they don't come up with much.

"If there were any clues, he hid them well," said a college friend who asked to remain anonymous out of sensitivity to Markoff and his family.

With details turned up in the investigation, like Markoff's possible gambling problem, a gun found hidden in his apartment in a hollowed out copy of Gray's Anatomy of the Human Body, and panties allegedly collected from his victims as mementos, police have depicted Markoff as leading a seedy alternate life.

Markoff pleaded not guilty in court. And the crimes of which he is accused could hardly contrast more with the life he showed the world, with his future as a doctor, and with plans for a picture-perfect marriage in August.

Indeed, he was set firmly on a path of middle-class success long ago in his tiny hometown of Sherrill, N.Y. Raised by his mother and stepfather in a two-story colonial at the end of a quiet street in the town of 3,100, he was recalled by neighbors as a well-behaved child who made his parents proud.

"They were loving and caring people," said Dorothy Guider, 53, a neighborhood mother who socialized with them regularly. "They would do anything for anybody."

Terry Law, who taught Markoff in first grade at McAllister Elementary, remembered him as a "skinny little towheaded boy" who did well on every test.

His high school yearbook pictures show him smiling eagerly, his hair neatly cropped and cleanly parted, without a visible trace of teenage rebellion or angst. He played high school golf and was on the bowling team, where he excelled, scoring in one match a 247 out of a possible 300. In one championship victory, he was described in a local newspaper as the "picture of consistency."

"On the spares I had good shooting," the paper quoted him as saying. "I was able to adjust to the lane conditions. As a team we were solid, and it was enough."

Markoff was one of 38 honor graduates from a class of less than 200, and a member of the National Honor Society. Even then, neighbors and teachers say, he knew he wanted to become a doctor. Sonja Hluska, a neighbor who taught Markoff in a junior-year literature class, said Markoff was one of the most polite, good-humored students she had ever taught.

"He's that type that you'd like to mother, because he was just that nice young man," she said. "Just a nice, clean-cut boy."

Poker was a part of his life then, too, it seemed. "I bequeath my poker playing skills to Andy Finley, so he won't lose his dad's house," reads his inscription printed in the yearbook.

Markoff arrived for college in Albany shy and unsure of himself, said Patrick Gillihan, a classmate who pledged a medical fraternity with Markoff. But he gradually gained confidence and began to make friends. He joined a Republican Club and volunteered at the emergency room of a local hospital, where he eventually met his fiancee, Megan McAllister.

Still, Gillihan and other friends said, Markoff maintained a kind of reserve that could make him difficult to know. Some friends said he acted haughtily toward people he felt were not his equal, and that could include women, whom he sometimes derided in jokes that some felt were inappropriate.

"He did have those issues, though a lot of people do," said Joe Coe, who attended SUNY-Albany with Markoff.

While his classmates more easily mixed with members of the opposite sex, Markoff was clumsy in conversations with women, to the point that friends snickered about it.

"He was kind of awkward around girls," Gillihan said. "He had a hard time with it. He wasn't very outgoing, and he didn't usually get very far."

Several classmates at Boston University School of Medicine, where Markoff is in his second year, said he could be warm but also oddly disconnected. "He never looked you in the eye," said a classmate, who described Markoff as an acquaintance and declined to give her name for fear it would hurt her professionally.

Another student said Markoff could be funny, with a wry, deadpan sense of humor. But his jokes were as likely to miss their mark, drawing quizzical looks and uncomfortable silences, several students said.

One first-year student said he had attended a party with Markoff and said he bragged about his poker prowess.

McAllister has defended Markoff, saying police must have arrested the wrong man. A close family friend, who would not give his name because he did not want to compound the family's suffering by speaking out publicly, said that McAllister's three older brothers had met Markoff and approved of him.

"The story from the brothers is, 'He was a really intelligent, likable guy, we all approved,' " he said. But the family is not holding out hope for Markoff's innocence, said the friend, who is in touch with one of McAllister's brothers. "She's the only one left with an inkling of hope," he said.

"She had a lot of friends that loved her and stuck by her and are standing by her now," he said.