Links suspect to a 3d assault 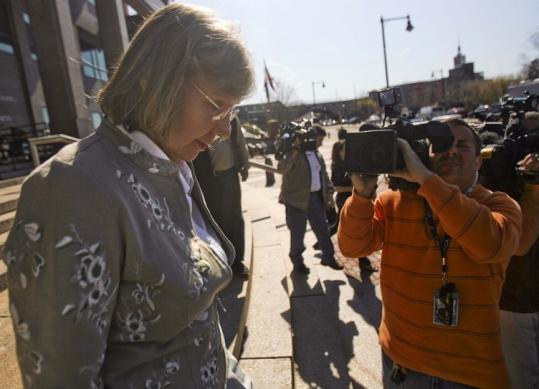 As investigators searched for the Craigslist killer in Boston April 16, Philip Markoff was an hour south of the city in Warwick, R.I, where he left his fingerprint at the scene of another attack in a hotel, according to a law enforcement official with knowledge of the investigation.

The Boston University medical student has also been traced to the crime scene by text messages sent from the area by a hand-held device moments after the attempted holdup of a prostitute at the Holiday Inn Express Hotel & Suites, said the official, who spoke on condition of anonymity because the investigation is ongoing.

The official did not know who received the messages, but said investigators were able to pinpoint the location of the device used to send them by analyzing the traffic on local cellphone towers.

"He definitely sent text messages literally within moments of the attack," said the official.

The fingerprint and computer evidence, combined with grainy black- and-white pictures of the alleged assailant captured by hotel security cameras, make it all but certain that Markoff will be charged soon by Rhode Island authorities in the attempted robbery of the 26-year-old prostitute, said the official.

Markoff, 23, pleaded not guilty Tuesday to charges of murder, kidnapping, and armed robbery in connection with separate attacks against two women at two Back Bay hotels. His lawyer, John Salsberg of Boston, did not return phone calls seeking comment about the evidence in Rhode Island.

The Boston attacks gained national headlines after police released surveillance images from both hotels showing the likely suspect: a tall, blond man who in one case appeared to be texting or using a hand-held device while walking near escalators.

Two days after Brisman's killing, as these images were circulating, the third attack occurred in Rhode Island and seemed strikingly similar.

The Warwick victim, who police said was visiting from Las Vegas, had advertised private lap dances on Craigslist. She told police that her client, a clean-cut blond man who stood about 6 feet tall, tied her up at gunpoint around 11:15 p.m. But after her husband entered the room, the assailant backed out, pointing his gun at the man before fleeing.

Yesterday, on what would have been Brisman's 26th birthday, her mother broke her silence and said her family has been devastated by the killing, but was comforted that an arrest has been made.

"I feel very much relieved that the man who did this is in custody and will not be able to do this horrible thing to another family," Carmen Guzman said in a statement released by the Suffolk district attorney's office.

Guzman said her daughter was studying to be a counselor and helped many people. Guzman said that she has a close family and that Julissa called every day.

"We won't be getting those calls anymore," she said. "The feeling of losing my daughter in this way and the pain she must have felt will haunt me for the rest of my life."

Around the same time that Guzman's statement was issued, Markoff's parents made their way through a knot 20 reporters and photographers staking out the Nashua Street Jail to visit their son for the first time since his arrest.

Richard Markoff and Susan Haynes stepped out of a black sedan with tinted windows at 1:40 p.m. and ignored questions shouted by reporters as the couple walked up the front stairs and into the jail, where their son is being held on a suicide watch.

On Thursday, Philip Markoff was placed in a cell, with a camera trained on him 24 hours a day, after a guard noticed a mark on his neck that appeared to be from a shoelace, according to a law enforcement official. For the second day, the Sheriff's Department declined to return phone calls about the incident.

Markoff's parents were accompanied to the jail by Salsberg, who addressed news media representatives after escorting his client's parents inside. "This is difficult for them," Salsberg said. "They love their son very much. They are supportive of him. That's what they would say if they are speaking to you."

Haynes and Richard Markoff are divorced, but both live in upstate New York.

After they left, Markoff's older brother, Jonathan, and his wife visited the jail. When a reporter asked what Markoff's parents feared most about the visit to jail, the lawyer did not mince words.

"All of you," Salsberg said, referring to the journalists.

Martin Finucane, Andrew Ryan and Shelley Murphy of the Globe staff and Globe correspondents Michele Richinick and Jenna Nierstedt contributed to this report. Saltzman can be reached at jsaltzman@globe.com.