Architects search for blueprint to get by 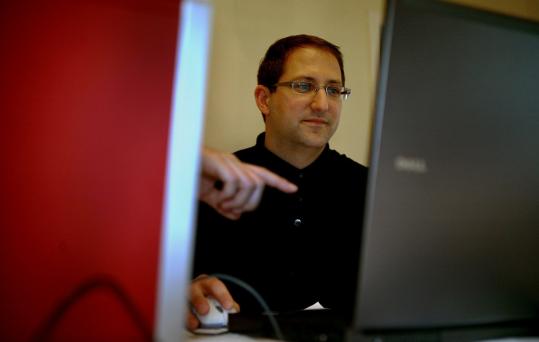 Graham Ruggie of Ashland is trying to reinvent himself since he was laid off from Cubellis, where he was director of product standards. The firm has lost about 200 positions. (Wendy Maeda/Globe Staff)
By Robert Campbell Globe Correspondent / April 25, 2009
Text size – +

As building plans stall in a recession, architects tend to get hit first and hardest. That's proving to be brutally true in Boston, a city with more than its share of professionals in the field.

Nancy Jenner, the acting director of the Boston Society of Architects, estimates that the average layoff rate in Boston architecture firms is already pushing 30 percent. In some it is more than 50 percent. Firm after firm report that with no new work coming in, things will only get worse this spring and summer.

"They are the ones that get busted around more than other professionals," said Kermit Baker, a Harvard researcher who also serves as the American Institute of Architects' chief economist.

Baker cites US Department of Labor figures for the nation as a whole, which reveal that from the level of peak architectural employment in July 2008 through January, architects lost jobs at double the rate of lawyers and accountants.

Architects are nothing if not inventive, and they are trying everything to survive the drought of new work.

Some firms have cut salaries from top to bottom. Others have moved to a four-day week. Some have stopped taking interns. Still others offer unpaid furloughs to valued employees, aiming to keep them around for the future when times get better.

What happens to the employees who do get laid off? Some reinvent themselves. Others leave the profession.

One who is trying reinvention is Graham Ruggie, 40, of Ashland. Ruggie used to be director of product standards at Cubellis, a firm with 16 offices in several states. Since last summer, Cubellis has dropped from 500 people to about 300 and closed some offices entirely.

Ruggie remembers the January day he got laid off. "I took 10 or 15 minutes to feel sorry for myself. My boss felt almost as bad as I did, and he gave me three or four days to wrap up what I was working on," he said.

"I used some of that time to make calls. I put out all my tentacles. I'd been talking to my wife and others about striking out on my own not only with my own architectural practice, but working on real estate development."

"I've been through three downturns," he said, "and this is definitely the worst."

Another recent layoff victim is Ann Berman, who was a project architect at Arrowstreet in Cambridge. Because it did a lot of commercial work, Arrowstreet was one of the hardest hit. Berman began looking elsewhere last year, failed to find a new job, and was laid off in September.

"I see it as a forced vacation," she said. "I'm doing the things I want to do. I volunteer for community service, I design sets for a children's theater, and I've applied to be a substitute teacher. I would love to be an art teacher."

But she adds that if another job opened up in architecture, she would grab it.

Jim Batchelor is a partner at Arrowstreet who is this year's president of the Boston Society of Architects. He admits to a precipitous drop in the firm, from 170 people to "around 50 or 60."

But he, too, sees a bright side, or at least claims to.

"It's a time to learn new skills," he said. Architects he knows are becoming qualified to rate the energy consumption of buildings, or are learning a new computer-based method of communicating between architects and builders.

"We all believe that's what's going to be our future, and we have time to retrain in a way we didn't when we were busy," he said.

Some architects are abandoning the job market altogether and going back to school. Applications at Harvard's Graduate School of Design are up 30 percent this year. At MIT's architecture program, applications are up 40 percent. There just aren't any jobs, said Deborah Johansen, Harvard design school spokeswoman . Harvard plans to host a session in New York where students will network with alumni who may be potential employers.

There are no fewer than five schools of architecture in Greater Boston, more than any other US city except New York, which also has five. The Massachusetts College of Art and Design expects to soon gain an accredited degree program, thus giving Boston six. Many of the graduates of these schools work for years in local firms before becoming licensed.

Richard Fitzgerald, the recently retired director of the Boston Society of Architects, likens this recession to the last big one, which was back in the early '90s. "It was a tragedy of lost jobs," he said. "We lost a whole generation of young architects who went into other fields, who otherwise would be moving into leadership positions in architecture firms today."

But Fitzgerald also notes, "I think there are few professions as resilient as architecture. Architects aren't used to being rich. They're in it to survive, not for the dollars."

Of course the problem isn't limited to New England. One hundred architecture firms recently showed up to compete for a single, rather modest library renovation in Malibu, Calif. And in Britain, government figures show that the number of architects filing for unemployment benefits increased by 760 percent in the last year, more than any other profession.

Baker points out an ominous difference between this recession and earlier ones. In the past, he says, institutional work - buildings for nonprofit clients such as hospitals and universities - held up better than commercial work, such as office buildings, condos, and retail stores.

But today, says Baker, with banks not lending and endowments shrinking, institutional projects, too, are being put on hold.

Some cite the government as the architectural client of last resort. They hope that the stimulus package will fund public works such as schools and healthcare and transit facilities.

Alex Krieger, a founder of Chan Krieger Sieniewicz in Cambridge, said he is facing a new kind of competition. "We do a lot of planning for government agencies," he said. "In recent months we've found that some of the biggest, best known architecture firms in the country, people who wouldn't normally go after small planning jobs, are competing with us. Suddenly, everyone becomes a planner. Public clients are impressed by these big national names. We've lost jobs that we think we'd normally have gotten."