Questions of control in public spaces ignite fierce debate, and in some cases new rules 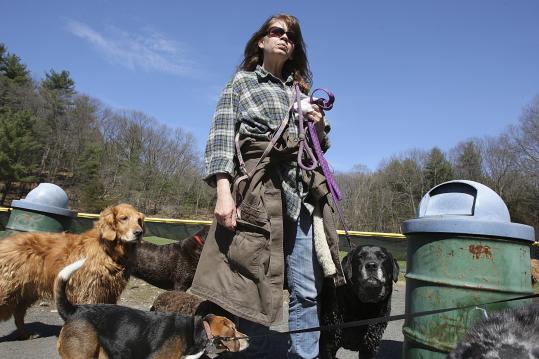 Dog walker Lisa Pattison is careful to make sure her charges are well behaved at Weston's Cat Rock Park: ''We love the park and don't want to lose it.'' (Suzanne Kreiter/Globe Staff)
By Erica Noonan Globe Staff / April 23, 2009
Text size – +

Dog control and off-leash options have provoked fierce debate in a number of local communities, including Newton, Wellesley, Brookline, Arlington, and Maynard, in recent years. But if the so-called suburban "dog wars" have a front line, it might be in Weston's Cat Rock Park.

There is a movement afoot in Weston to limit the number of dogs that people can bring into the woodsy, half-mile-square town park, based on concerns that more controls are needed on the pets - and their human minders.

The warrant for next month's Town Meeting includes a proposed bylaw change that would require professional dog walkers to pay a fee to use the park, and limit the number of dogs that could be walked as a group on public property.

But dog walkers like Debi Whitcomb and Lisa Pattison don't intend to cede this prized territory without a fight. To that end, they emerged from a morning walk last week at Cat Rock Park with plastic bags full of dog droppings, some of it, they say, left behind by local residents who had not cleaned up after their pets.

The scrutiny on dog walkers is intense right now, and picking up after dogs is part of their strict professional code, they say, even if it involves animals that aren't their responsibility.

"You could say this is our office," said Whitcomb, owner of Natick-based Wholesome Hounds.

Pattison, a Newton-based professional walker, said she is careful to herd her clients away from nervous-looking owners of single dogs, and to make sure her charges running off leash in Cat Rock respond to voice commands. "We love the park and don't want to lose it," she said.

Weston is a particularly prized destination for local dog walkers. Unlike most area cities and towns, Weston has no leash law or other restrictions governing its 800 licensed canines or visiting pets, and Cat Rock Park is large, with a stream that dogs love to splash through and a parking lot on a cul-de-sac that provides a spacious and safe place for loading and unloading a pack of dogs.

Whitcomb and Pattison, who described themselves as fairly typical of local dog walkers, said they transport between five and eight dogs per outing in their minivans, once or twice daily, for a run around the park. The dogs' owners, most of whom are from Weston, Waltham, Newton, Natick, or Watertown, are 9-to-5 professionals willing to pay around $20 per day for a home pick-up, walk, and drop-off because their pooches "are so much happier and better behaved when they get exercise," said Pattison.

Whitcomb's charges often "sleep all the way home" after their exercise sessions, she said. She said she could support some new rules to make the Cat Rock hospitable to all, but said she hopes "the town won't take it too far" and slap small business owners with a stiff annual fee for a permit.

Weston resident Jean Masland, a retired nurse, said she visits the park every day with Pumpkin, her 2 1/2-year-old Australian cattle dog mix, who loves his hourlong romp with the other visiting dogs.

She said her sympathies are generally with the walkers. "This is what dogs love - to be in a pack," she said.

One idea expected to come up during a public meeting next week on the proposed bylaw is limiting the hours that dog walkers could use the park, such as between 10 a.m. and 3 p.m. on weekdays. Masland sees it as an acceptable compromise, allowing Weston residents with single or shy dogs, or children in tow, to be assured the coast is clear at certain times.

"It would make me sad if we couldn't have this for the dogs," said Masland. "If we are going to have dogs, we need to find a place where they can run free."

The discussion on the proposed changes is set for 7:30 p.m. Tuesday in Town Hall; the May 11 Town Meeting article drafted by selectmen has been posted online at www.weston.govoffice.com.

Weston's proposal is being debated just two months after Wellesley officials and local dog walkers reached a compromise regarding pets running off leash in Perrin Park, a popular open-space area next to youth playing fields.

As the number of licensed dogs in Wellesley has increased by about 100 per year, with the most recent figures showing 2,722 of the pets in the town's roughly 9,000 households, so has the year-round use of the fields for youth sports.

The conflict came to a head last fall, when neighbors and parents complained of dog waste left uncollected and packs of dogs running wildly and interrupting games.

"Sometimes it takes only one upsetting experience with a dog for a parent to get upset and very sensitive about dogs," said Janet Hartke Bowser, executive director of Wellesley's Natural Resources Commission, which oversees the town's dog rules.

The town briefly banned off-leash dogs in Perrin, creating an outcry among owners. Now, dogs may run off leash at the park during early morning and evening hours, when the playing fields are generally not in use.

"It seems to be working pretty well so far," Bowser said. "In general, compliance has been good."

The situation appears to have been a wake-up call for both supporters and opponents of letting dogs run off leash on town land. Two incumbent members of the Natural Resources Commission were reelected last month despite challenges by opponents of the dog controls.

"It's about protecting everyone's ability to use the land," Bowser said.

Local communities have dealt with dog vs. human complaints in various ways. Wellesley already prohibits anyone from walking more than three dogs at a time. Since 2006, Brookline has had a limit of three dogs running off leash, and restricts access to most of the town's 14 public parks to mornings and evenings. Arlington is planning a pilot program that would have residents pay $40, and nonresidents $100, for a permit to walk dogs off leash in its parks.

In Maynard and Hudson, dog owners are banding together to encourage good behavior by off-leash pets. MayDOG, a nonprofit group formed by Maynard dog owners, is helping coordinate off-leash obedience training classes, and advocating for a new fenced-in dog park at the site of a former town landfill on Waltham Street. A dog park is also under discussion in Northborough.

Modern society needs to find a compromise that allows humans and dogs to coexist peacefully, according to Jim Neely, a professional dog walker who takes his canine charges - hailing mostly from Brookline and Boston - to a number of area parks, including Cat Rock in Weston and Cold Spring in Newton.

"I can understand their concern over people making money on public land," the Quincy resident said. "But if they charge a fee, then I would feel like I would really have to come every day to get my money's worth. Is that really what they want?"

Brookline: Dogs must be kept on a leash while on public property, except from dawn to 9 a.m. in certain parks.

Weston: Residents can walk no more than three dogs at a time.