Craigslist link, other clues led to I-95 arrest 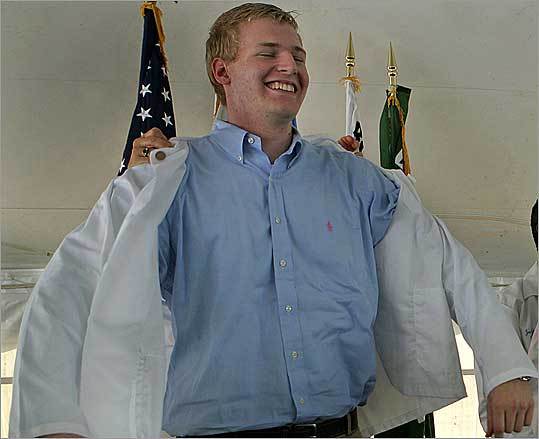 Boston police arrested a Boston University medical student yesterday in the slaying of a New York woman at a luxury Back Bay hotel last week and an earlier attack on another woman. Both victims had advertised personal services on Craigslist.

After an intensive manhunt along the Eastern Seaboard, Philip Markoff, 22, of Quincy, was stopped by police around 4 p.m. while driving south on Interstate 95 in Walpole, Boston Police Commissioner Edward Davis said at a press conference last night at police headquarters.

The second-year medical student was charged with fatally shooting 26-year-old Julissa Brisman April 14 at the Marriott Copley Hotel and with the armed robbery and kidnapping of a prostitute who was tied up at the Westin Copley in the Back Bay on April 10.

Brisman had advertised her masseuse service on Craigslist; the second victim was a prostitute who advertised through the online classified website.

"We are very, very happy to have this man off the streets in a timely way," Davis said.

The arrest was made in two crimes whose brazen nature and swanky locale shocked Boston residents, drew national attention, and exposed the seamy world of prostitution fostered by the anonymity of the Internet. Police in Warwick, R.I., would not comment last night on whether Markoff is a suspect in a similar attack that occurred in a hotel there Thursday.

Suffolk District Attorney Daniel F. Conley called Markoff "a predator" who may have attacked other women he met through similar Craigslist ads.

"There may be other victims out there with a similar MO, a Craigslist MO, and if there are, we want to help you," Conley said at the news conference.

Authorities arrested Markoff following what Davis called a round-the-clock investigation that relied on forensic evidence including fingerprints, electronic evidence, and photographs of the suspect taken by hotel surveillance cameras.

Ellen Berlin, chief spokeswoman for the Boston University School of Medicine, said Markoff has been suspended because of the criminal charges.

He is one of more than 600 medical students on the school's South End campus and was featured grinning broadly in a 2007 Globe photograph as he showed off his white medical coat with other students at the school's annual White Coat Day ceremony.

One medical school colleague recalled meeting Markoff at orientation and studying anatomy with him. She said, "He seemed like a nice guy, and he was a helpful, smart kid."

Markoff is engaged to be married and attended the State University of New York at Albany before entering medical school, according to two law enforcement officials.

According to a wedding website, he was engaged to Megan McAllister, whom he met at SUNY in Albany, when she was a senior and he was a sophomore.

McAllister could not be reached for comment last night. A dark Chevy Trailblazer registered to James McAllister of New Jersey was towed into the police station last night. It was unclear whether the vehicle was connected to Markoff's arrest.

A man who identified himself only as Gary, Markoff's former stepfather, said he was shocked by the arrest.

"He's a great kid," said Gary, who is divorced from Markoff's mother. "I can't believe what's going on. . . . He's a very bright, intelligent, articulate guy. I just keep thinking there must be some mistake."

Davis declined to say whether police have recovered the gun used to kill Brisman but police executed a search warrant last night at Markoff's apartment, in a high-rise luxury tower on Highpoint Circle in Quincy. Markoff is scheduled to be arraigned in Boston Municipal Court this morning.

Police say he tied up and robbed a prostitute at gunpoint at the Westin Copley in the Back Bay on April 10 and shot Brisman several times in the torso after a struggle in the doorway of her room on the 20th floor of the Marriott Copley on April 14.

On Thursday, a gunman tied up and robbed a Las Vegas prostitute at the Warwick Holiday Inn Express & Suites in Rhode Island, police said. Davis said Warwick police are continuing to investigate.

The two prostitutes robbed in Boston and Warwick have not been identified.

Friends of Brisman, a troubled young model and aspiring actress who had battled alcohol abuse, welcomed news of the arrest.

"That sounds great," Jeramie Gray, 26, of New York said with a sigh.

Asked if he was relieved, he said, "Yes and no. You can't bring back a friend, but it's better that he doesn't do it to anyone else."

Emily Claire, a 30-year-old makeup artist who worked with Brisman on a photography shoot in New York, said she was thrilled. "I'm really excited that he's not out there terrorizing anyone else," she said.

Earlier yesterday, Warwick police released four grainy, black-and-white photographs of the man they believe was responsible for the Warwick attack. The victim had advertised private lap dances on Craigslist.

The man, who was wearing a jacket over an untucked shirt in the hotel surveillance photographs taken Thursday, resembled the suspect shown in pictures taken at the Marriott Copley and at the Westin Copley.

The series of photographs from the Warwick hotel are blurry, making it hard to say whether it is the same man, but Boston police investigators believe it is.

The 26-year-old victim of the Warwick attack told investigators that a clean-cut, 6-foot-tall blond man tied her up with plastic cord.

When the assailant began rummaging through the woman's belongings, her husband entered the third-story room, McCartney said. The attacker pointed the gun at him and backed out the door.

Photos: On the trail
of the Craigslist killer