Applicants get creative, trying to turn admissions 'maybe' into 'yes' 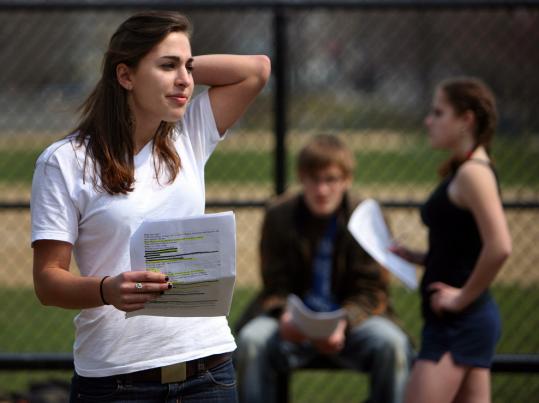 Landing on a college waiting list used to mean that all an applicant could do is, well, wait - and hope.

But in the elbows-out world of college admissions, savvy hopefuls, often with the help of private advisors and aggressive high school counselors, are launching full-scale campaigns to spring themselves from the list.

In-the-know seniors are writing letters assuring admission deans that if admitted, they will go. They're e-mailing updates on their second-semester senior grades, spring awards, and other academic breakthroughs. (There's no room for senioritis if you're on a waiting list.)

And they are placing one, just one, well-timed phone call, a step that can spur an admission officer to pull the student's file and disclose whether there is something else he or she can do to boost the chance of admission.

"It's too bad if students don't know to follow up," said Tom Parker, dean of admission and financial aid at Amherst College, which expects to take about 35 students from its list of 1,000. "If you're going to get off the wait list, you're really going to have to demonstrate a significant interest."

Not that this is something many colleges publicize when they inform applicants that they have landed in admissions limbo. While admission deans admit they can be lobbied, they insist that, technically, they do not require any additional information. And schools are quick to say that they do not penalize students who fail to follow up, especially if they come from low-income communities where high school counselors are often overwhelmed.

"We wouldn't want to overlook a student who doesn't know she can even do that," said Jennifer Desjarlais, dean of admission at Wellesley College.

But all things being equal, especially as the swooning economy has added a new volatility to the admissions process, students can vault to the top of the pack by writing a letter about why a college is their number one choice and promising to attend if accepted, said deans at numerous colleges.

Cecilia Brown, a senior at Brookline High, has been waitlisted at three schools including her top choice, the University of Rochester. She said she would not have followed up if her aunt, a private college admission coach in Newton, had not advised her to send a letter to the admission dean and an e-mail to the person who interviewed her, to "try to make myself sound as appealing as possible."

"Luckily, I had a lot to say because I've been really busy," said Brown, who is acting in a student-directed play, interning at a youth organization to discourage tobacco use, and volunteering at a teen suicide hot line. "I don't feel like I can just let go and stop working."

But Brown said many of her classmates in similar positions balk at having to sell themselves all over again.

"Tons of people say: 'Oh, I just sit around and wait. That's why it's called the wait list,"' she said. "A lot of people, as a result of laziness or ignorance, don't do anything about it."

Colleges build waiting lists so that they have a reservoir of qualified students to draw from to replace successful applicants who choose to go elsewhere. This year, with finances making it more difficult to predict which students will be able to attend, many colleges are giving themselves a bigger safety net by expanding waiting lists, according to the National Association of College Admission Counseling.

The deadline for regularly admitted students to notify colleges of their intentions is May 1, after which admission officers reconvene to determine who makes it through the ivy-covered gates.

While demonstrating interest and presenting updates often helps in the final rounds of evaluations, tread carefully. Go too far, admission deans warn, and you will snuff out your chances.

Do not stalk admission officers, camp out in front of their office, or flood their inboxes with daily e-mails. ("That's like the kiss of death," said Richard Nesbitt, director of admission at Williams College.)

Bribery is also a no-no, though that didn't stop one wannabee Williams mother from sending Nesbitt a $2,500 check this month along with a rambling letter about her son's talents. (He voided the check; her son's fate has yet to be decided.)

And do not waste money or time flying to campus and expecting an interview this late in the admissions process.

"That is usually driven by the parent, who thinks, 'As soon as they see you, they'll be convinced how wonderful you are,' " Parker said. "It's terribly, terribly awkward for everybody involved."

Colleges see their fair share of creative, albeit desperate, efforts of waitlisted students trying to stand out. One Harvard hopeful taped a pen between his toes and wrote an essay with his foot. Another sent a life-size plaster statue of herself. And several have submitted photos of their bedrooms, painted Crimson red, the school color.

"We keep them and file them under supplementary material," said William Fitzsimmons, dean of admissions and financial aid at Harvard, which admitted more than 200 students from the waiting list last year and hopes to do the same again.

"They can send in any additional information they want," he said. "But there's no magic bullet here, honestly."