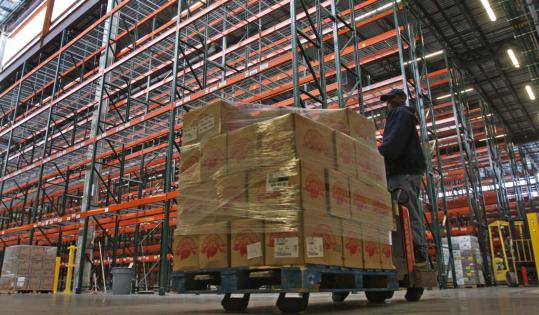 The Greater Boston Food Bank is rapidly moving into its much larger facility, known as the Yawkey Distribution Center. It was designed to distribute 50 million pounds of food a year. (George Rizer/Globe Staff)
By David Abel Globe Staff / April 18, 2009
Text size – +

The gleaming new warehouse is twice as large as the old one across the street, with five times as much freezer space, eight times more refrigerator space, and more than double the number of slots to load pallets for dry goods. Its exterior walls are made of shiny, corrugated steel; there is a playroom for children who come to volunteer; and an elevator from the well-appointed offices leads to a stone-set roof deck, where executives plan to entertain guests.

The Greater Boston Food Bank, which has experienced a surge in demand in recent years, moved into a state-of-the-art facility yesterday across the street from its dingy, brick headquarters beside the Suffolk House of Correction in Boston.

The move, however, has come with a steep cost for a nonprofit organization that has been struggling over the years to keep up with the rising demand for food and growing expenses. The new building's $35 million cost is equivalent to what the organization pays for food over three years.

"This is not an opulent storage space; it's a functional warehouse," said Catherine D'Amato, the food bank's president and chief executive. "You need the facility to do the work."

D'Amato said the new warehouse, which the organization began planning five years ago, is necessary to accommodate the increasing number of residents seeking food assistance. She said it did not make financial sense to try to renovate the old building or continue to rent space at warehouses around the state.

"We absolutely ran out of room," said Carol Tienken, the chief operating officer.

There is also a variety of energy-saving accoutrements, such as skylights to add natural light, a specially insulated roof that reduces summer heat, intake valves to cool the refrigerators with outside air in the winter, and a solar wall that will help heat the building in the winter and cool it in the summer.

The food bank has $9 million more to raise to cover the cost of the building. Most of the $26 million already raised came from private donors, D'Amato said.