A fossil-fueled future for Pioneer Valley? 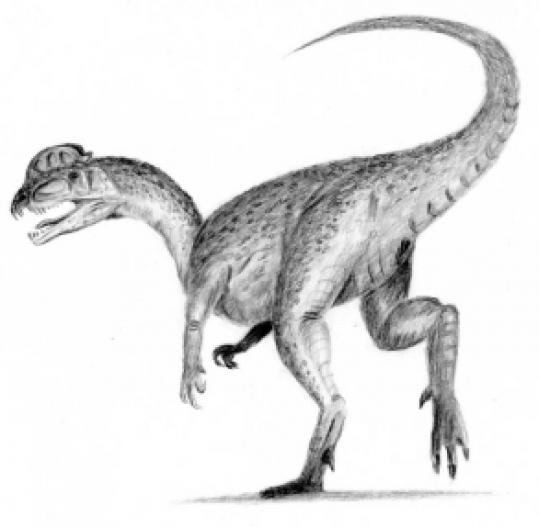 GILL - The slab of sandstone lay on the forest floor, in the middle of a dirt path near a long-abandoned quarry, as a steady rain pelted, filled, and overflowed its cracks and indentations.

"I think this is one!" said Sarah Doyle, running her fingers slowly but excitedly over three thin depressions.

The uninitiated might think she had found a few haphazard scratchings. But to Doyle, the markings are precious artifacts - dinosaur tracks - that she and a band of other true believers say could bring a jolt of prosperity to this economically challenged portion of the state.

Doyle and her cohorts have seized on thousands of prehistoric footprints that pepper the fine-grained rock of the Pioneer Valley - an often overlooked strip of Massachusetts at the foothills of the Berkshires - to forge a local makeover.

They are pushing a major rebranding of the region that would include a name change. Goodbye to the Pioneer Valley. Welcome to the Valley of the Dinosaurs.

"This has a popular cultural appeal. It has adult appeal, and it has kid appeal," said Doyle, who is president of the Friends of the Great Falls Discovery Center in nearby Turners Falls, a village in Montague. "There are all these jewels and beads that need to be strung together. It's a local story with national significance."

The Pioneer Valley - a name created in the 1930s to promote tourism with imagery of colonial frontier life - is a fertile repository of prehistoric artifacts. Subtropical and marshy 190 million years ago, the area was home to a profusion of now-extinct creatures, many of them relatively small, three-toed meat-eaters that reached the size of a large kangaroo.

These were not the rock stars of the dinosaur world. Unlike the Tyrannosaurus rex and hulking Brontosaurus, the dino-denizens of the Connecticut River Valley featured bit players like Eubrontes, Grallator, and Anomoepus.

But because of the footprints they left behind, the earliest history of American paleontology can be traced to this valley. When a farm boy, Pliny Moody, found dinosaur footprints in South Hadley in 1802, they were believed by local clergy to be the tracks of a raven that disappeared from Noah's ark. And when Dexter Marsh, in 1835, saw tracks on a stone slab he was laying for sidewalk in Greenfield, the markings were regarded as turkey traces or merely a chance arrangement of geologic features.

Those discoveries, however, became the first dinosaur footprints ever studied by scientists, at a time when the animals were not even known to have existed. As the 19th century progressed, the Connecticut River Valley became one of the world's premier sites for what scientists eventually realized was evidence of a lost world of awe-inspiring reptiles.

The wealth of tracks here spawned both high science and low-brow commerce. Amherst College possesses a world-class collection of tracks. The state Trustees of Reservations operates a park in Holyoke where ancient footprints can be viewed. And the Springfield Science Museum includes Dinosaur Hall, which includes a life-size replica of Tyrannosaurus rex among its exhibits.

But there also is The Rock, a "fossil and dinosaur shop" in Deerfield that sits across Route 5 from Dr. Spooky's, a museum designed like a haunted castle with an advertisement for "dino exhibits." And in South Hadley, there is the Nash Dinosaur Track Quarry, where visitors can buy small fossils, shards of rock with ancient footprints, and even petrified dinosaur droppings.

A small state grant of $6,000 has been awarded to the Pocumtuck Valley Memorial Association to explore the idea of promoting the region and linking a string of museums, parks, academic institutions, and cultural groups into an informal collection of dinosaur-related attractions up and down the valley, from Springfield to the Vermont border.

Signs are envisioned that would guide tourists to venues around the Valley of the Dinosaurs, said Tim Neumann, executive director of the memorial association, which is based in Deerfield.

Doyle and Neumann think "Valley of the Dinosaurs" has marketing legs, even though Darby O'Brien, who runs an ad agency in South Hadley, burst out laughing when told of the proposal.

"I think it's a pretty good way of indicating to the consumer out there that we're finally dead, although the leadership in the area has often been referred to as dinosaurs," O'Brien said.

"But if the dinosaurs really did come back out here," he added with a laugh, "I can see that building some traffic."

Ann Hamilton, president of the Franklin County Chamber of Commerce, said a dinosaur promotion is worth exploring, although she cautioned that any broad re-branding of the valley is likely to be expensive.

"We already have enough trouble being identified as different from the Berkshires," Hamilton said. "A new name and new destination take a lot of money behind it, and I'm not sure we're prepared for this."

Kornell Nash, who owns the Dinosaur Track Quarry in South Hadley, said he would endorse a shift from Pioneer Valley.

Nash, who recently opened for the season, has an obvious business interest in such marketing. Over the years, Nash said, 5,000 sets of tracks have been found in the shale that he peels from a small quarry on his property. Prices range from $5 to $25 for one toe, $25 to $600 for a complete track, and up to several thousand dollars for a large slab with multiple tracks.

Those dinosaur droppings? They cost $10 to $50, "depending on the size and quality," Nash said.

Unlike Nash's quick support, Hamilton paused when asked whether she could endorse another name.

"I'd have to think about that," the Chamber of Commerce president said. "It would sound like we haven't moved very far."