Shooting victim had tried to leave tough past behind 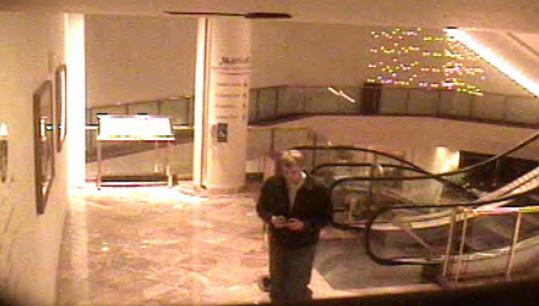 Police are seeking the public's help in locating this man, shown in frame of a surveillance tape from the Marriott Copley hotel.
By Peter Schworm and Maria Cramer Globe Staff / April 17, 2009

Julissa Brisman took the train from New York Monday, setting up in a Marriott hotel room in the Back Bay with a massage table and seeing a roster of local clients. Tuesday morning, she went to an Alcoholics Anonymous meeting, as she did nearly every day since admitting a drinking problem more than a year ago. That night, a friend said, she planned to go on a date with a Yale graduate she had met on the train.

But first, she had one last client.

"Her 10 o'clock was going to be there," said a close friend, Elizabeth, recounting the last brief phone call she had with Brisman that day, at 9:55 p.m.

Moments later, the 26-year-old Brisman was fatally shot, apparently by a client who tried to tie her up and rob her. Yesterday, as a grand jury convened to hear evidence in the case and as police sifted through a flood of tips about the identity of a clean-cut man captured on hotel security cameras, friends remembered a spirited woman who was trying to leave a troubled past behind.

Mark Pines, a close friend who had known Brisman for six years, said that after years of struggling with alcohol, Brisman had been sober for well over a year.

"She was in recovery, and she had done just an amazing job," said Pines, who convinced Brisman that she needed help and occasionally accompanied her to meetings. "I was so proud of her. She had turned her life around."

Cobbling together a string of modeling and acting gigs, including one as the "Cell Phone Girl" in a short public service video, she had told her massage clients she was done for good, friends said. But she must have been in more financial trouble than she let on, friends speculated.

"That's the tragedy of this," Pines said. "It's like escaping from Alcatraz and going back for your hat. She had given up all that."

"We just cried for 15 minutes," she said. "She probably thought, just one more time and that's it."

Pines said Brisman would never exchange sex for money, and would not have risked resisting a robbery attempt.

Police believe Brisman was struggling with her attacker as he tried to bind her hands with a plastic cord when he shot her multiple times in the torso. A witness staying down the hall from Brisman's room said she heard two loud shrieks and rushed into the hallway to see her unconscious on the floor, halfway out the room door.

Police are seeking a man in connection with the killing and an April 10 robbery at the Westin Copley Hotel, where a Las Vegas prostitute was robbed at gunpoint of a debit card, $800 in cash, and $250 in gift cards. A witness to that attack said the woman, a petite blonde in a cocktail dress, said she had been robbed by a tall, blond muscular man who threatened her with a gun and a knife and left her bound and gagged.

The friend Brisman spoke to shortly before she was shot, Elizabeth, said she read e-mails the man had sent to Brisman asking to meet. His tone was polite, she said.

"I think they said, 'Hi, I'm visiting from out of town,' " she said he wrote "He'd love to get together. Very nice and cordial."

Elizabeth said she provided the e-mails to police, who declined to comment, citing the grand jury investigation.

Police describe Brisman as a masseuse and said they found a massage table in her hotel room. Several friends said they believed that Brisman, a petite woman who friends said barely weighed 100 pounds, would not prostitute herself. Some said her Internet postings said, "No full service."

"She thought of it as a modeling gig," Elizabeth said. "I think she was feeling like she was doing a massage but being paid more because she was a model."

Matthew Terhune, a 34-year-old photographer from Queens, photographed Brisman in November and January, and recalled her as a sweet, energetic person who gulped Red Bulls and "wouldn't hurt a fly."

Terhune said Brisman traveled often and was often vague about her life. When asked about how she was making money, she said she earned up to $1,000 a night working bachelor parties, but insisted all she had to do was walk around in a bikini.

Terhune said the disclosures about Brisman's occupation meshed with her mysterious existence.

"Her stories never really made sense," he said.