For Pike chief, tact not part of the job 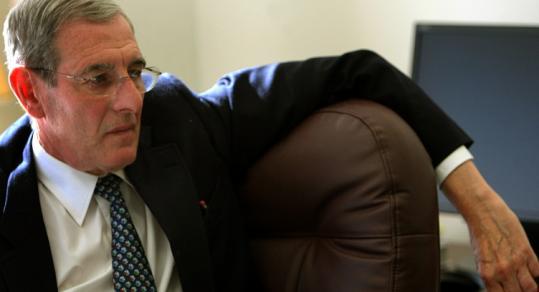 Thousands of people slamming their dashboards during the Easter Sunday traffic jam were undoubtedly cursing the people who run the Massachusetts Turnpike, wondering where they were during the epic delays.

The guy in charge, Alan LeBovidge, does not shrink from the question. Instead, he offers an answer almost shocking in its lack of varnish or of appreciation for the frustration felt by travelers.

"I spent a quiet day at home," he confesses. "To be honest with you, Sunday I finished up my income taxes. . . . I watched the Celtics go down to super defeat. I watched the Red Sox lose, and I watched the Masters, the guy who should have won blow it and lose."

Did he get some calls about the 7-mile backups and all the people missing holiday dinners after hours of delay on the turnpike? Yes, he said, but no one conveyed a safety issue or problems any worse than other heavy-traffic holidays.

He gets these messages all the time, he continued, and it didn't seem like the type of emergency that would warrant drastic action, like opening the toll booths and letting drivers pass through free.

LeBovidge, 66, is a latecomer to government after a lucrative career in finance, and he relishes bold statements, quirky gestures, and a few fights along the way. He compares himself to The Wolf, the brusque character in the movie "Pulp Fiction" who, giving precise instructions, supervises the cleanups after a bloody murder. But his last eight days as executive director of the Turnpike Authority have cast an alienating light on LeBovidge's frankness and boldness, which have often distinguished him from the run-of-the-mill bureaucrat.

Last week, he shut off the lights on the Leonard P. Zakim-Bunker Hill Bridge, an action he said saved $5,000 per month for a struggling agency, but seemed to some a flashy provocation designed to highlight the authority's poor financial condition. Then, over the weekend, in another money-saver that backfired, he cut staff levels along the Massachusetts Turnpike, creating the massive Easter traffic delay.

On Monday, he refused to back down, telling drivers they would have to "grin and bear it," buy Fast Lane passes to get through more quickly next time, and understand that his agency's lack of money would hurt service.

"Just to be punitive like that, just to say, 'It's their fault for not having Fast Lane,' is just absurd for someone in a public position," said Michael Kelleher, a commuter and founder of stopthepikehike.org.

LeBovidge's Easter staffing decisions and lack of contrition for the chaos it caused, triggered widespread public fury and dominated a press conference held - one that was supposed to let the governor talk about the state's urgent budget gap - for a full two days after the traffic jam. Governor Deval Patrick demanded an investigation, but otherwise stood by LeBovidge, calling him a public servant with a tough job running one of the state's most troubled agencies.

Even after being pilloried all week for a mess that seemed predictable, with politicians and commuters calling for his ouster, LeBovidge keeps talking.

"I think we could have done some things differently," he said yesterday. "Maybe we should have. Everything is a learning lesson in life."

He could have hired a few more overtime workers, strategically placed, he said, while still "tightening down as much as possible" on the amount of staff. In the future, he would like to see more signs, a greater distance from the tollbooths, in order to separate Fast Lane drivers from the rest, to help them avoid getting stuck behind cash customers lining up at the booths.

"He just speaks bluntly," said Representative Joseph F. Wagner of Chicopee, the Transportation Committee chairman, who said LeBovidge has been good at trimming waste on the Pike and protecting it from an ever-changing set of fundamental financial threats. "I think, with regard to Easter weekend, that those remarks came across as lacking in compassion for what motorists dealt with. I think he tends to be more numbers-driven and it's less about people's feelings."

LeBovidge said he does not like to be in the news. But he often finds his way there and adds his own exclamation point to the story.

When he makes a bold gesture, like shutting off the lights on the Zakim, he follows it up with a zippy quote about "crawling on broken glass" to save money.

In his zeal to get motorists to pay tolls with Fast Lane transponders, he walked around turnpike tollbooths during rush hour one morning last year, handed out surveys through car windows, and asked bewildered drivers why they did not have a transponder, before offering them one free of charge.

When he was hired to run the turnpike in late 2007, he described the agency as a mix between a "dictatorship and an absolute monarchy," where employees are afraid to do anything that will get them noticed and depend on consultants to avoid taking responsibility.

LeBovidge is willing to take responsibility but is loath to admit error and tells anyone who criticizes him that Patrick or the turnpike board can fire him on the spot, if they wish. Board member Michael Angelini said LeBovidge has been perfect for the job, never "sugarcoats it," and should not be judged on a single traffic weekend.

LeBovidge, who spent three decades at PricewaterhouseCoopers, donates his $160,000 salary to charity.

"I think it's more: 'Hey, we've got to save money. I was put here to save money,' " said Michael J. Widmer, president of the Massachusetts Taxpayers Foundation. "I respect that, [but] all of these decisions have political consequences. That's the context that Alan always ignores."

In the middle of a volatile debate over fixing the debt-ridden transportation system, LeBovidge's actions have "only fueled the anger of the public, and I think that's the more serious consequence here," Widmer said.

Widmer has a history of sparring with LeBovidge, dating to the early part of the decade, when LeBovidge came out of retirement to run the state Department of Revenue under two Republican governors. In that capacity he confronted unions and corporations, squeezing more tax dollars out of the latter, and won a reputation as an agent of change, before Patrick fired him during the transition to a Democratic administration. Several months later, in November 2007, Patrick turned around and appointed him executive director of the troubled Massachusetts Turnpike Authority.

Asked about his transportation expertise, LeBovidge said, "I drive a car."

He maintains that politics are someone else's job. "I'm not trying to alienate people on purpose," he said.

Though he runs one of the state's most hated political bureaucracies, one that is slated for demise by the middle of next year if Beacon Hill has its way, LeBovidge said he has not yet finished. And, if he can get enough money in donations, he promises he will turn the lights back on the Zakim.