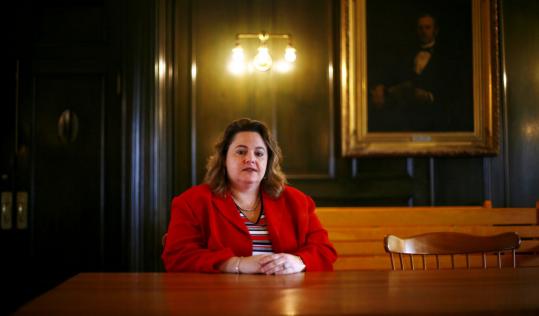 A Massachusetts family court system that is strained during the best of times and taxed with implementing new child-support guidelines faces another challenge: divorced parents seeking relief from - or enforcement of - support arrangements as their financial and employment situations deteriorate.

Although the probate court system, which has jurisdiction over child-support cases, does not keep statistics on modification petitions, judges and lawyers within the system say such filings have increased noticeably in recent months as the ranks of the unemployed and underemployed have swollen. Layoffs, cutbacks, and battered investment portfolios have affected custodial and noncustodial parents on all ends of the socioeconomic spectrum, along with tens of thousands of Massachusetts children.

Nationally, the picture is just as grim, according to a survey released last month by the American Academy of Matrimonial Lawyers. The 1,600-member group reports a 39 percent increase in the number of divorced spouses seeking changes to child-support arrangements in a tight job market and deepening recession.

The chief justice of the Probate and Family Court, Paula Carey, concurs, noting that contempt citations have risen sharply in recent months as more litigants have fallen behind on their obligations, whether employed or not. Carey is particularly concerned about those who represent themselves in court, either because they can't afford an attorney or because they believe they can be their own best advocate.

"Many don't understand that if they lose their jobs, they need to come back right away and get [the divorce agreement] modified," said Carey. Otherwise, she said, they're already in trouble because child-support modifications are not retroactive to the date a job was lost or a similar change in financial circumstances.

Carey chaired a 12-member task force that reviewed the state guidelines over a two-year period beginning in October 2006. Under federal law, states must update their guidelines, which apply to married and nonmarried parents alike, every four years.

Spelled out in the new guidelines are a recognition that healthcare coverage is vitally important to children's welfare and a commitment to streamlining the process by which adjustments are made. The guidelines establish minimum payments, set at $80 a month, but do not cap them at the high end.

The revamped guidelines already face a stiff legal challenge, however, another reflection of tough economic times. This afternoon, Massachusetts Superior Court Judge Linda Giles is scheduled to hear a lawsuit filed by the Boston-based nonprofit Fathers and Families. The group contends that the guidelines unfairly burden noncustodial parents financially and were unconstitutionally implemented by the courts, not the state Legislature. According to the lawsuit, the new guidelines sometimes double or even triple the support levels previously mandated, causing further stress on splintered families.

"We do the best we can to make sure that kids at least get the basics," said Carey, defending the current system. "That's not always easy to do, especially at lower income levels." But, she said, "All of us understand that when someone loses a job, there's a tendency to crawl into a hole - and they shouldn't. We want to help them."

Gayle Stone-Turesky, an attorney who worked on the task force, says the group was particularly concerned with protecting lower-income families. "Even before the economy went south," said Stone-Turesky, "these people were clearly struggling."

According to many divorce lawyers, however, most cases going to court are being brought by parents seeking lower payments because they've lost their jobs or face foreclosure on their homes.

Those getting regular support "are grateful to be getting it," said attorney Marylinne Rice. "We're seeing more cases where both sides can't afford" to keep up financially. In the past, she adds, when someone lost his job, the argument to the court would be, "He's fully employable." "That's gone by the boards," she said, although courts usually require proof that a litigant has applied for work on a regular basis.

Divorce attorney Fern Frolin estimates that calls to her office about contempt and modification cases are running 25 percent above normal. She likens today's economic downturn to the 1980s housing recession, when divorcing couples were stuck with houses they could not sell.

"That was tough, but this year it's not just housing, it's everything," said Frolin. One example, she says, is the small-business owner whose backlog of accounts receivable - money owed to the company but uncollected - makes his business appear healthy on paper, when in fact there's little available cash to divide between parties. "You can't pay child support with receivables," she noted. "I've never seen that before."

For middle- and upper-income families, another financial pressure point is investment vehicles like retirement accounts and college-tuition funds, frequently regarded as communal property in divorce agreements. These funds, normally expected to grow in value, are now being tapped for cash or decimated by a sinking stock market, say observers like Boston attorney Donald Tye. As a result, he says, many judges are adjusting court-ordered private-school and college tuition payments to fall more in line with state-college fees than with those charged by elite prep schools or Ivy League colleges.

Kelley Bothe, a Wellesley psychotherapist who runs support groups for divorced parents, says the emotional havoc being wreaked on families is palpable. One woman in her group is a stay-at-home mother suddenly forced into the job market to help support her children. Two fathers are business owners who are simultaneously coping with a bad business cycle and devastating personal loss. Another is facing foreclosure on his home. Where children are involved, the anxieties grow even more pronounced.

"In any divorce, people worry about finances," said Bothe, "yet there's often a shared goal to provide for kids in the way they're used to. But if the income is suddenly compromised, parents wonder, How are we going to do this and give our kids the lives they've had?"

Beverly attorney Edmund Greene has seen both sides of the child-support issue, legal and personal. Greene, divorced four years ago with a 5-year old daughter, is petitioning the court to reduce his $360 weekly support payments by half. His private practice has dried up, says Greene, and fully a third of his income comes from unemployment while he continues to look for full-time work.

Meanwhile, Greene is helping other probate court litigants on a pro-bono basis - including some who are fighting against proposed court-ordered cuts in the child-support levels they receive. "These people can't navigate the system by themselves," he says.

For one divorced father of four who requested anonymity because his case hasn't been settled, the crumbling economy has had consequences beyond the emotional and financial. His $1,400 weekly support payments, plus additional expenses like health insurance and tuition, had been based on a court judgment in 2007.

The man works for a realty business, and since the real estate market has frozen, his income has plummeted. Earlier this year he fell $23,000 behind in what he owed, including attorney's fees to his ex-wife's lawyer. With his modification petition still pending, he was handcuffed in court and put in jail for 30 days. A pretrial hearing on his case is scheduled for May.

Joseph P. Kahn can be reached at jkahn@globe.com