He's not buying bygones for Bush

Senator from R.I. pursuing failings with a vengeance 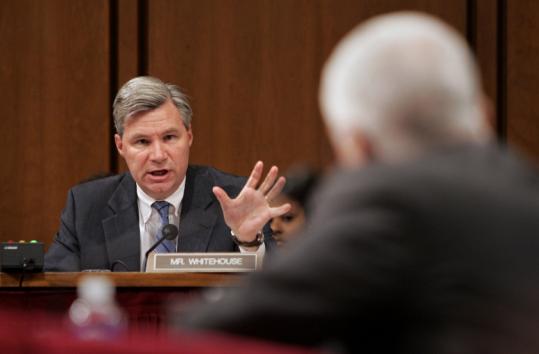 O ne of the old hands in the US Senate, Democrat Pat Leahy of Vermont, likes to tell of the oversight hearing when a former Bush administration official tried to brush off an inquiry from the rookie senator from Rhode Island, Sheldon Whitehouse.

Attorney General Alberto Gonzales "tried to wave Sheldon off on a question," Leahy said. Whitehouse cut him off and poured down "an icy glare" so thoroughly chilling, "the temperature dropped about 20 degrees in the room. People were thinking, 'Uh-oh, there's a grown-up up here on the dais.' "

Whitehouse won election to the Senate, one of the less-heralded Democrats from the class of 2006 that defeated six Republican incumbents to take control of the chamber. That class included Jim Webb, the former Navy secretary who represents Virginia, and Jon Tester of Montana, the organic farmer with the trademark crew cut.

But in two years, from his seat on the Senate Judiciary Committee, Whitehouse carved a niche in national politics as a forceful critic of the Bush administration.

With a terse, prosecutorial style, Whitehouse has become a favorite of left-leaning C-SPAN junkies. He pressed Bush administration officials over allegations that US attorneys had been fired for political reasons, that the Justice Department had been stacked with political ideologues, and that the Office of Legal Counsel issued opinions to give cover to interrogation techniques that were illegal.

And now in committee hearings, floor speeches, and TV interviews, Whitehouse is lead salesman for Leahy's plan to establish a "truth commission" to investigate Bush administration policies and actions related to torture.

"On very basic moral issues, such as not torturing prisoners, we fell down," Whitehouse said. "You can't undo what was done, but I think what you can do is show, in the way you respond, that the America you trusted and believed in is back again."

Jennifer E. Duffy, senior editor for The Cook Political Report and a veteran observer of the Senate, said Whitehouse's aggressiveness "has helped him move out and build some of his own identity. I think he's decent on TV and producers have taken note."

The former US attorney and Rhode Island attorney general has also benefited from a serendipitous match between his legal background and the hot issues of the time, Duffy said.

"I liken it to when Jon Corzine got to the Senate in 2001 and fell apart," she said. Corzine, a New Jersey Democrat and former chief executive of , "was the guy in the Democratic caucus who understood Enron, and therefore derived some benefit from it."

Whitehouse acknowledges there is some danger that his hammering on an administration now in retirement could pigeonhole him as a hyperpartisan. "I think that you have to be prepared to let the facts speak for themselves," he said. "If we're right about this stuff, then the verdict on our inquiries will be good."

Republicans have mocked the proposal for a truth commission; President Obama received it coolly.

In Rhode Island, where the unemployment rate is above 10 percent, Giovanni Cicione, chairman of the state Republican Party, said Whitehouse's ongoing pursuit of Bush wrongdoing is insanity.

But with Newsweek recently reporting that the Obama administration is preparing to declassify several "ugly" Bush administration memos on rough interrogation techniques, the truth commission may find fresh traction.

"Once people get a look at what was done they will be pretty shocked," Whitehouse said.

He has issued ominous warnings from the Senate floor: "We may have to face the prospect," he has said, "of looking with horror at our own country's deeds."

What tea leaves is he reading? Whitehouse, who also serves on the Senate Select Committee on Intelligence, has been exercising his authority to see documents about classified programs. "Let's just say I'm in a position to know what I'm talking about," he said.

Whitehouse, 53, is the most recent in a long line of men from prominent Yankee families to represent Rhode Island in the Senate. His late father, Charles, was US ambassador to Laos and Thailand in the 1970s.

Whitehouse is tall and trim, with a mop of gray hair and a precise way of speaking. "He looks like you sent out to central casting for a senator," Leahy joked.

Whitehouse graduated from Yale and the University of Virginia School of Law. He served in the state attorney general's office, then as an aide to Governor Bruce Sundlun. President Clinton appointed Whitehouse as the US attorney in 1994.

Whitehouse lacked a natural gift for glad-handing when he embarked on his first political campaign, for attorney general in 1998. He still won handily, and the conventional wisdom among Providence's barstool punditocracy was that Whitehouse would be Democratic nominee for governor in 2002. But a close primary loss to former state senator Myrth York detoured Whitehouse into a political exile working for a private law firm.

He was a much-improved campaigner when he returned to challenge Republican incumbent Lincoln Chafee in 2006. The race became a referendum on GOP control of the Senate. Whitehouse tried to tie Chafee to President Bush at every opportunity, on his way to a seven-percentage point win.

Bush-bashing helped get Whitehouse elected, so aggressively pursuing the last administration may not hurt him politically at home, though it may have an expiration date, said Victor Profughi, adjunct professor at the University of Rhode Island.

"If Rhode Islanders tend to think of him only in terms of a critic of the Bush administration, he may not be able to build a positive image on some other public policy area," Profughi said.

Whitehouse, who has been highly visible at community events in Rhode Island, says he is as passionate about overhauling healthcare and addressing global climate change. "And we're all neck deep in the immediate economic concerns," he said.

But, Whitehouse said, "You can't hold back for fear that someone will say, 'That's just politics.' That comes with the territory down here."