To noted lawyer, it's an open and shout case 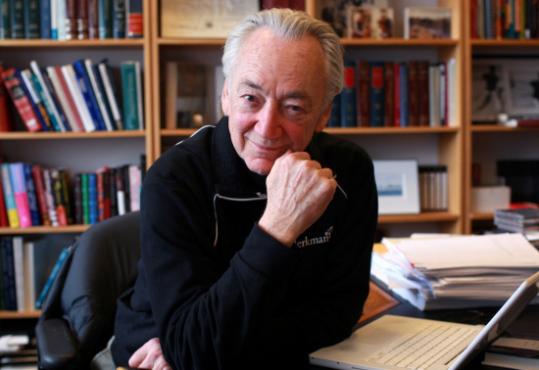 CAMBRIDGE - Charles R. Nesson's love affair with computers began in 1958, as a sophomore at Harvard College. He took a programming class and worked on a UNIVAC I, the first commercially available computer. His eyes twinkle as he recalls the technological behemoth, with more than 5,000 vacuum tubes and the blinking lights of a grade-B science fiction movie.

Half a century later, Nesson is widely regarded as one of the most brilliant, if eccentric, professors at Harvard Law School, but his love of technology is undiminished. A sign outside his office proclaims him "Eon, dean of cyberspace." He enters carrying a purple iPod nano. And now, he is defending a Boston University graduate student accused of illegally downloading music in a closely watched federal lawsuit.

The suit filed by the Recording Industry Association of America has yet to go to trial, but Nesson's recent tactics have drawn criticism, even among the association's most outspoken foes. In the past few weeks, he has tape-recorded a telephone conference with a federal judge and opposing counsel, and then - after US District Judge Nancy Gertner of Boston told him to shut it off - posted the record ing on his blog and featured it in a take-home exam on evidence for his students.

Nesson also posted dissenting e-mails from academics he had hoped to call as expert witnesses for the defense but who rejected his legal theory that Joel Tenenbaum had the right to download songs under the fair use doctrine of copyright law. And he put up a four-minute recording of his wife, Fern, a former Harvard law student of Nesson's, denigrating the experts as misguided naysayers and one of Nesson's law students working on the case as a "schmuck."

"Our strategy in this case is one of openness," he said. "Joel committed no crime. He's ashamed of nothing that he's done. He has no need for attorney-client privilege. He has no need for secrecy. He wishes he could claim privacy, but that has been grievously violated [by the recording industry]. . . . It's our strategy to litigate this case open."

"It's off the charts, in terms of unconventionality of litigation tactics, and I'm being kind," said Ben Sheffner, a Los Angeles copyright lawyer who has been following the case closely on his blog Copyrights & Campaigns.

"The stuff about posting internal discussions with his experts on the merits of the case is unheard of. I can't imagine any lawyer on earth revealing that his own experts think that his case is seriously flawed."

Sheffner noted that Massachusetts' rules for professional conduct for lawyers prohibit them from revealing confidential case information without the permission of clients.

Nesson reacts with mock horror when asked about posting the e-mail messages on strategy - "Oh, my God, this is our secret stuff!" he exclaimed - and he sounds incredulous when asked whether he had Tenenbaum's permission.

Tenenbaum, a 25-year-old BU student seeking a doctorate in physics, said that he is lucky to have Nesson and a team of Harvard students defending him free of charge and that he trusts Nesson's instincts.

The team has filed a countersuit against the recording industry that challenges the constitutionality of the suit against Tenenbaum, who potentially faces more than $1 million in damages for allegedly downloading music illegally.

The recording association has mailed more than 30,000 letters to individuals and families in recent years, demanding payment for illegal file sharing. Most recipients have settled out of court for $3,000 to $5,000. Tenenbaum is one of the few to fight back in what many people consider a David vs. Goliath battle.

Still, even Fern Nesson, 61, acknowledges that she and her grown daughters affectionately call her husband "the infuriator" for his unconventional behavior. She said she was unaware he tape-recorded her unfiltered criticisms of the potential expert witnesses and of a student on the legal team and posted it online.

Nesson, she said, constantly carries a tiny digital tape recorder around their Cambridge house and must have turned it on when she wasn't looking. "He is literally a person who believes in openness," said Fern Nesson, who apparently holds no grudge and has apologized to the student. "He feels his life is an artwork."

Cara Duckworth, a recording industry spokeswoman, said in a statement the case is "about a Harvard professor's crusade to gut the copyright laws that protect creators and his attempt to transform a courtroom into a circus. . . . For a music community severely harmed by illegal music downloading, including thousands of working-class folks out of jobs, this is no academic exercise."

The case, which is tentatively scheduled to go to trial in June, is hardly the first time Nesson has stirred controversy.

As a young lawyer in 1971, he defended Daniel Ellsberg for leaking the classified Pentagon Papers, about the origins of the Vietnam War, to the press. He earned the nickname "Billion Dollar Charlie" in the 1980s for advising lawyers to pursue big damages against in the Woburn toxic waste case, the subject of the nonfiction legal thriller, "A Civil Action."

In the spring of 2002, he turned over his Harvard torts class to two colleagues for part of the semester after he proposed holding a mock trial for a student who had defended the use of the word "nigger." Nesson had envisioned the trial as an exploration of the boundaries of free speech and hate speech, but the idea infuriated the Black Law Students Association and others.

Nesson, a founder of the Berkman Center for Internet & Society at Harvard, has also raised eyebrows at the university for publicly saying he smokes marijuana regularly, tried cocaine once, and used LSD. He still smokes marijuana, he said last week, but does not light up on Harvard grounds.

Still, even some people who support his fight against the recording industry are questioning his tactics.

Ray Beckerman, a New York City lawyer who has defended people sued by the recording association and has a blog called Recording Industry vs. The People, said the posting of e-mail messages from so-called copyleft academics whom Nesson had consulted was "insane."

Jason Schultz, an assistant clinical professor at the law school at the University of California-Berkeley and a former staff attorney for the Electronic Frontier Foundation, which sides with Tenenbaum, agreed that posting the e-mail messages of potential defense witnesses was bizarre and risky; the recording industry could try to share the comments with a jury to undermine Tenenbaum's case.

Still, Schultz said, Nesson's transparency might be part of a broader strategy to spur debate and make the case a public referendum on the file-sharing lawsuits.

"This case is bigger than Joel Tenenbaum, and Joel may want it to be bigger," said Schultz, who called Nesson a "wacky character" but brilliant.

Two of the academics whose e-mail messages Nesson posted, Lawrence Lessig, who teaches at Harvard Law, and Wendy Seltzer, who teaches at American University's Washington College of Law, declined to comment.

Robb London, a Harvard Law spokesman, said Nesson's actions, including the recording he posted of his wife denigrating a student, have "certainly prompted some discussion here," but law school officials declined to comment further.

Today, Nesson and his legal team will appear before the US Court of Appeals for the First Circuit to argue that a pivotal upcoming hearing in front of Gertner should be streamed live on the Internet, in keeping with Nesson's view of transparency. Video cameras are banned in the federal trial courts in Massachusetts, and the recording association opposes Nesson's motion.

Nesson said anyone with a computer screen should have a chance to see the battle between the industry and "this kid, Joel, who had the chutzpah to fight back."