Make way for a duckling search

Sculpture is stolen from Public Garden 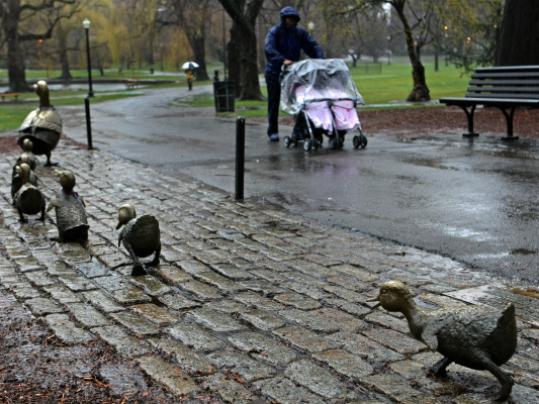 It may be spring, but no one expected this duckling to be walking off on its own just yet.

Pack, the second-to-last of Mrs. Mallard's storied eight ducklings in the cherished "Make Way for Ducklings" sculpture in the Public Garden, was stolen sometime between Sunday night and yesterday morning, cut off at the base of its bronze webbed feet.

City officials consider the theft no prank, and have threatened to bring criminal charges of larceny of public art against anyone who stole the prized duckling.

"Not only are the Make Way for Ducklings loved by everyone, but they are public art," Mayor Thomas M. Menino said yesterday in a strongly worded statement. "This act is not a prank; it is a crime. We would strongly encourage anyone with information to please come forward to assist with Pack's safe return."

Boston has taken pride in the sculpture, which celebrates the award-winning children's book by Robert McCloskey that bears the same name. Created and installed in 1987 by Nancy Schon, the art dis play has become one of the city's favorite tourist destinations, at the entrance to the Public Garden at Beacon and Charles streets.

"It's like a rite of passage, when you come into Boston and the Public Garden," said Mary Hines, spokeswoman for the Boston Parks and Recreation Department. "I think we as Bostonians take pride in our works of art, and the history and significance of having those statues in the Public Garden."

Fascination with the duckling sculpture even led to the creation of a similar sculpture in Moscow.

Police are investigating whether the culprit took the sculpture with plans to sell it as scrap metal, an increasing occurrence as bronze has become a valuable commodity in the hot market for metals.

Last year, officials at the Forest Hills Cemetery removed several bronze statues from its renowned Contemporary Sculpture Path after a number of others were looted.

But this is not the first time one of the ducklings has been taken. In 1987, when the ducks were first placed in the garden, Quack was taken before the sculpture even had time to settle.

Then, in 1988, Mack was stolen. Coincidentally, at around the same time, Quack was returned; an anonymous caller told police they could find the purloined duckling at the Bowdoin Street side of the State House. There, police found Quack in a cardboard box.

In 1992, Quack was taken again, and the theft created such an outcry that buttons reading "Bring Quack Back" were sold to raise money for a replacement. The second Quack was never returned.

In 1999, Jack was taken; a month later it was found in a Boston College library cubicle.

No one has ever been caught in any of the thefts, and Jack and the original Quack were the only ones ever returned.

Police have never considered any of this a laughing matter.

"The city would like to see this significant piece of public art returned to its rightful spot," police Superintendent Rafael Ruiz said at a news conference last night.

Pack was last seen at about 5:30 p.m. Sunday. Yesterday, a Boston park ranger noticed it missing during a routine park inspection.

Authorities said the sculpture was cut off at the base of its webbed feet by a thief or thieves who knew what they were doing. Hines said officials are calling for the return of the duckling, which could cost $8,000 to $10,000 to replace.

Until then, tourists and schoolchildren who head to the Public Garden to see the Swan Boats and the famous sculpture will have to settle for a family that is one duckling short.