Next stop: All aboard

It also has taken more than twice as long as planners had expected, 50 percent more money than originally budgeted, and immeasurable patience on the part of commuters, neighbors, and local business owners, who watched as one of the city's most vital neighborhoods seemed to become an eternal construction zone.

Now, after multiple halts and starts, after lawsuits and neighbors' wrangling, after constant changes pushed the price up to nearly $50 million, the end of construction for the transportation depot in Kenmore Square is in sight.

"It has been excruciatingly difficult to get to this point, and it's taken a ridiculous amount of time, but if you live long enough, anything can happen," said Terri North, president of the Kenmore Residents Group, who has lived for 37 years in an apartment overlooking the square.

Was it worth the trouble?

"That's a tough question to answer," she said. "There were days I would have said it wasn't. But now that we can see plants growing and all the progress, we're thrilled to be at the end, and yes, I think it was worth it."

The fruit of the labor includes a swooping glass canopy in the heart of the square; widened brick sidewalks and paved walkways across the streets; scores of new trees and street lights; and three new elevators and three new escalators, all designed to accommodate the disabled. (Two of the elevators are among the projects yet to be completed. Everything should be completed by the end of the year.)

Less visible improvements include 17 video cameras for public safety, an 8-inch rise in the subway platform to make it easier for those using wheelchairs, a new communications room to better coordinate service among the station's three train lines and five bus lines, and everything from more lighting and new emergency exits to subterranean hose hookups for the fire department.

"We did all this while servicing more than 10,000 commuters who use the station every day," said Charlie O'Reilly, the MBTA's assistant general manager for design and construction, who has overseen the project. "We know it has been hard on them, but now that the project is substantially complete, we believe they will see that the new conveniences were worth it."

The project may seem older than it is, perhaps because city and T officials first began planning to renovate the timeworn square in 1998. The initial goal was to knock down the 1960s-era brick bus shelter and make the station compliant with federal laws that require access for those with disabilities. The project later grew to incorporate changes to the roads and sidewalks and other beautification efforts.

T officials had originally planned to start construction in 2002 and had been quoted in news stories saying they would finish by 2004. But design changes, delays in the permitting process, and financial obstacles pushed back the start date. The project was finally put out to bid in late 2004, broke ground in early 2005, and planners then expected the construction to finish by the start of 2007.

Then, work slowed when contractors discovered scores of undocumented utility lines that had to be moved. Increased traffic from Red Sox fans buoyed by the team's successes since the 2004 World Series win has also impeded work progress.

Engineers learned that the metal fasteners used to attach the glass panels of the new bus shelter weren't strong enough to survive the square's strong winds - a glitch that delayed the project for several months.

Another factor was the T's decision to settle a lawsuit with groups representing people with disabilities. The agreement forced the T to spend $310 million to make the train and bus system more accessible for disabled riders, requiring major changes in the Kenmore plans.

"The changes translated into delays," said John McCormack, the project's chief engineer. "It would have been nice to be able to do this job according to the original plan. But that's a fantasy. There are always changes."

While the square is no longer covered with cranes and concrete trucks, the work is still not done.

Dirt piles still sit where grass and planters are planned. An old, rusting wind shelter remains bolted beneath the new glass canopy. Elevator shafts are empty and covered with scaffolding. Walls still have to be painted, there are lights left to be installed, maps must be updated, and new signs are needed to replace the fraying pieces of paper now used to direct commuters.

Pam Beale, president of the Kenmore Association, which includes more than 50 local businesses, has suffered with the rest of them, as she watched business at her restaurant, Cornwall's, slow during the long years of construction. She has heard all the complaints, and made many of her own.

"There's been a lot of bumps and scrapes along the way," she said. "If we knew what it entailed from the beginning, we might have handled it differently. But when you look out there now, it was really worth it. The square needed to be completely reworked."

Some businesses are already noticing the difference.

Diane Hanson, manager of The Wine Gallery, said her store is attracting residents who live on the other side of the square but never knew her store existed.

"The square's brighter now, there's more foot traffic, and people are more willing to cross the street," she said. "Until now, this felt like being in the gulag."

Others aren't as sure the benefits outweigh the costs.

Leah Eckelberger, owner of Jean Therapy, started her lease five years ago, under the impression the work would be finished in two years. "This has basically been a pit since then - that, and a parking lot for all the construction workers," she said. "Aside from the improved sidewalks, I don't see how this is any better than it was before."

Lisa Gosling, manager of a local Century Bank branch, is just content she no longer has to play chicken crossing Beacon Street, but she's less thrilled about one of the new elevators, which blocks her window.

And like a lot of others who live and work in the square, she remains skeptical the project is really finished.

"It's getting there," she said. "But they keep saying that it will be done soon. I hope soon means now." 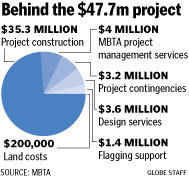