THIS STORY HAS BEEN FORMATTED FOR EASY PRINTING
Articles of Faith

V. Gene Robinson on the faith of a gay bishop 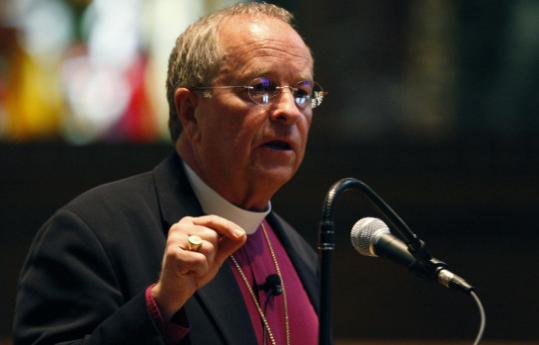 New Hampshire Episcopal Bishop V. Gene Robinson, famous (or infamous, depending on your perspective) as the first openly gay bishop, visited Boston last Sunday to preach and lecture at Trinity Church in Copley Square. The afternoon lecture was provocatively titled "The faith of a gay bishop," and Robinson said a last-minute look at the title caused him to throw away his prepared text and speak relatively extemporaneously about his Christian faith. A few excerpts . . .

Reflecting on praying secretly with gay Christians in Hong Kong who said they find hope in the Episcopal Church's decision to approve of a gay bishop:

On finding gay stories in the Bible:

"How do I keep this up, day after day? Because we know how it's going to end, don't we? Our struggle is going to end with the full inclusion of gay and lesbian, bisexual and transgendered people, in the life and ministry and leadership of the church. I have no doubt whatsoever."

The University of Notre Dame, which courted inevitable controversy when it offered President Obama an honorary degree and a speaking platform, last Sunday announced the second element of its Commencement Day plan: granting its Laetare Medal, bestowed at the same event, to Harvard Law professor Mary Ann Glendon.

The invitation to Obama, which was accepted by the White House the previous Friday, is controversial because Obama supports abortion rights, and some Catholics believe that politicians who support abortion rights should not be honored or allowed to speak on Catholic campuses.

Glendon, of course, has just finished her service as US ambassador to the Holy See, and she is an opponent of abortion rights who is highly regarded by the Catholic hierarchy and by conservative Catholics; the Laetare Medal that she will receive is described by Notre Dame as "the oldest and most prestigious honor given to American Catholics." Here is what Notre Dame's president, the Rev. John I. Jenkins, said in announcing the award:

"Both as a public intellectual and as a diplomat, Mary Ann Glendon has impressively served our Church and our country. She is an articulate and compelling expositor of Catholic social teaching who exemplifies our University's most cherished values and deserves its highest praise."

New Yorker cartoon editor Robert Mankoff on Tuesday kicked off a New Center For Arts and Culture series with a talk on cartoons about Judaism at Temple Israel in Boston. I asked him about his thoughts on making fun of Jews:

Q. What distinguishes cartoons about Jews?

A. There aren't very many cartoons about Jews. If you look back at the history of the New Yorker, you will see, especially in the '20s and '30s, when New York was changing, there were a number of, shall we say, interesting cartoons showing that change. I don't think the cartoons were anti-Semitic, but they would perhaps be looked at now in that way - they recognized the changing nature of the city and the increasing place, especially in commerce, that Jews had in the city.

Q. Is there a special sensitivity to cartoons about Jews?

A. I think there's a special sensitivity, in general, to cartoons about specific religions. New Yorker cartoons, in general, are not mean cartoons. Much of the humor in society is the humor of ridicule. But our cartoons are not the cartoons of self-satisfaction, but of self-dissatisfaction, and that makes them almost unique now in American culture, which is so polarized, and in which humor is basically a form of mockery in which the other is the fool, or the person whose balloon has to be deflated. We do that, too, but most of the cartoonists do cartoons that are in some sense autobiographical. When you look at Jewish humor, for the most part, the jokes are quite layered - they build up and eventually show some sort of logical inconsistency - and a lot are philosophical. (In the broader culture) a majority of jokes have an aggressive component, a scatological component, or a sexual component, but Jewish jokes work through understanding the absurdities of the logic.