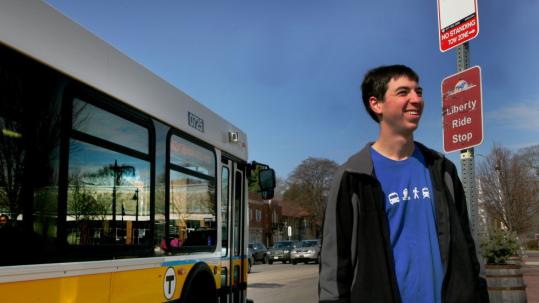 Danny Moraff (above), a 17-year-old member of Lexington's transit advisory board, has been a transportation buff for a long time. When he was in preschool, Moraff dressed as the D-Line for Halloween (below). (Globe Staff Photo / Wendy Maeda)
By Noah Bierman Globe Staff / March 29, 2009
Text size – +

The town of Lexington's transit service is fairly informal. The stops are pretty much wherever you happen to be standing when you see a bus.

But in one regard, the scrappy Lexpress and its six bus routes are ahead of the MBTA and its sophisticated network of boat, bus, light rail, heavy rail, commuter rail, bus rapid transit, and trackless trolley service.

Thanks to a local teenager, it was one of the smallest of pioneer transit agencies to integrate its route maps and schedules into Google Transit, a feature of Google Maps that reminds users seeking driving directions that they can also take buses and trains. Google Transit, launched in its current form in fall 2007, also helps users figure out how much time they'll need for their trip and where and when to show up for a bus or subway so they don't get left behind.

Danny Moraff, now 17, decided when he was 15 that he liked the idea of Google Transit - then in a developmental stage on the Web - and its ability to draw more people out of their cars. So he joined Lexington's transit advisory board, convinced officials it was a worthwhile project, and volunteered to do all the legwork himself.

"I'm not a techie," said Gail Wagner, transportation services coordinator for Lexpress, which has a $450,000 annual budget. "This is a shoestring operation."

For Moraff, that meant spending all his free time riding six bus routes to plot the longitude, latitude, and typical arrival times on every block in the system. It meant logging every intersection in town and figuring out the computer coding that suited Google's engineering needs. Moraff estimates it took him 60 to 100 hours over a period of 18 months, in between internships and schoolwork.

Most bus and rail systems on Google Transit are larger and have tech staffs to gather this type of information. Lexington has Moraff.

"Our technology is not really advanced," Wagner said. "We would have never gotten there."

Google engineers, who helped Moraff identify kinks in his data, agreed. Moraff is unusual among transit advocates not only for his age, but also because of his willingness to offer more than suggestions.

"Danny's instance is pretty unique and special. In most cases, it's an official project of the transit agency," said Elaine Filadelfo, a company spokeswoman.

The Massachusetts Bay Transportation Authority has its own computerized route planner, but it is not yet integrated into the Google system, which will make it more compatible with other transit agencies in the state and with other Google searches. That should happen by July 1, according to Joe Pesaturo, MBTA spokesman.

Moraff, a high school junior, takes the 76 bus to Alewife and then rides the Red Line to Commonwealth School in Boston. He's been a transit junkie since preschool, when he dressed up as the D-Line for Halloween. Since then, he's been selected for a coveted spot at a national transit conference and had a paid internship last summer at the MBTA's service planning department.

Though he loves trains and subways with child-like enthusiasm, he talks about public transit like a seasoned urban planner, casually tossing phrases like "livable cities" into his explanations.

"You have a lot of people who really could be taking transit, using it, but we've built a society that makes driving easier in so many ways," he said.

He hopes, through his work, to persuade his neighbors to give buses a try.

"I don't hold any illusions about this," he said. "Lexington is a town that has not been built around public transit, unfortunately."

Overhaul is no hardship for labor

Lawmakers have talked a lot about reducing generous employee benefits at the Massachusetts Bay Transportation Authority as they work on overhauling the state's debt-ridden transportation system.

But last week, moments after the Senate approved what legislators were describing as a generational and money-saving reform effort, the head of the MBTA's largest employee union was shaking hands with senators and thanking them for their hard work.

In an interview conducted between handshakes in the Senate lobby, Steve MacDougall, president of the MBTA Carmen's Union, said he remained unhappy with the bill because it attacks "100 years of collective bargaining."

So what happened to put MacDougall in such a good mood?

1) The famous change to the MBTA's "23 and out" rule that lets workers retire with meaty pensions in their early 40s will affect only new hires if the Senate bill becomes law, meaning it will take another generation to matter.

3) Language granting the MBTA supervisors "management rights" - the ability to hand out work assignments regardless of union seniority - was taken out.

Senator Steven A. Baddour, a Methuen Democrat who cochairs the Transportation Committee, said after the vote that the bill, which would also reorganize several state agencies, would save billions of dollars over 20 years and fundamentally change the way transportation is delivered.

"This was a grand-slam home run for the Carmen's Union," said Michael J. Widmer, president of the Massachusetts Taxpayers Foundation. "They celebrated. This is a huge victory."

Widmer said the Senate bill was watered down - actually "watered down is being kind" - and will not save the billions predicted if it becomes law.

But MacDougall pointed out that the fight is not over: "This is one of three required branches."

Governor Deval Patrick submitted his own bill, which is not as kind to the unions. And the House is expected to weigh in with its version when members debate transportation later this week.