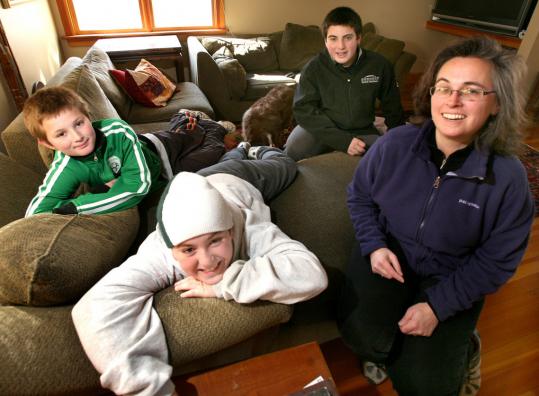 As the ice melts on New England lakes and summer camps shake off their winter coats, another sound can be heard along with the usual hammering, scraping, and sawing: families discussing, sometimes painfully, whether they can afford to send their children to camp this year - and camp directors asking themselves whether they will fill those lakeside bunks.

Early spring is when summer camps, hundreds of which are scattered across the region, eagerly anticipate the arrival of campers three months hence. Most parents enrolled their children months ago. But this spring looks a little different, many in the business acknowledge, as do the strategies being used to attract campers and their financially uncertain parents.

"People say they're interested, that they'll decide by March 1st, then March 15th, then March 30th," said Beverly Shiffman, president of Student Camp & Trip Advisors in Newton, a resource for families making summer camp decisions. "They're waiting because they're frightened, or else sending their younger ones to day camp instead. They don't want to say no, so they're saying, 'OK, four weeks this year instead of eight.' "

At a national camp directors' conference in Florida last month, many camps reported lagging 5 to 15 percent behind last year's sign-up totals, according to one attendee, David Peterson, resident director of Cape Cod Sea Camps in Brewster. "No question, it's a hot topic," he says.

In New England, camps that usually fill up by December, or even post waiting lists by then, are staring at vacancies and formulating cost-saving strategies to get through the summer, according to Bette Bussel, executive director of American Camp Association New England.

Bussel's organization represents 400 overnight, day, and specialty camps in six states, approximately one-third of all camps in the region. This weekend, ACANE is hosting a conference for 800 camp directors in Manchester, N.H. Several workshops will be devoted to camp management in recessionary times.

"There's definitely more of that this year," said Bussel. "Camps are planning two or three budgets, depending on enrollment."

Other emerging strategies, says Bussel, include offering shorter residential sessions and more flexible payment schedules, discounts for siblings, and negotiating more favorable deals with local vendors like food and transportation suppliers, many of which depend on the camps to stay afloat.

To many families, whether to send a child to summer camp is not solely about the expense, although that does have a significant impact on household budgets. The cost for a 28-day session at an ACANE residential camp averages $5,654, with day camps costing about half as much. Eighty percent of the camps offer financial assistance, according to Bussel, but even discounted fees can be burdensome.

Financial considerations aside, young campers build strong emotional bonds with their campmates and counselors, making the experience more than just a fun-filled summer vacation, Bussel and others point out. Ties to a particular camp often run through several family generations, heightening the emotional bond even more. As important for many families is what to do about child-care if camp is taken off the table. School vacation must be filled somehow, particularly for children whose parents both work outside the home.

Pamela Cobb, director of Camp Runoia, a girls' camp in Maine, said many families she has spoken to are struggling with the issue of cost versus commitment. Paying several thousand dollars in fees (Camp Runoia charges $7,100 for a 7-week session) might seem daunting, but many families strongly believe in the educational and social value of the camp experience and will make other sacrifices, like a family vacation, to be able to pay.

"They ask how we can help them, and fortunately we have a group of alumni who do just that," said Cobb, noting that a $10,000 scholarship pool funded by Runoia alums has been bumped up this year to $17,000. "Some of them, sadly, we can't. Those families are looking at the big picture and having some painfully honest discussions with their kids."

Karen Grey of Duxbury is among those making tough decisions this year. Grey and her husband, who runs a boat-building business, have three boys, a 14-year old and 11-year-old twins. The oldest is going back to New Hampshire's Camp Pemigewassett for the fourth time, said Grey, executive director of Wildlands Trust, a nonprofit serving Southeastern Massachusetts. Camp Pemi, as it is known, has been a part of her husband's family life for four generations. The couple considers the $7,400 cost an investment in his character development and self-esteem. As for the twins, they are sending only one.

"Fortunately, we both still have our jobs," said Grey. "But we can't afford to send all three, certainly. So we're sending the twin who's more anxious to go." The other twin did not seem as ready for sleep-away camp, but, "under different circumstances, we would have pushed it," she said.

Carl Metzger, a Boston lawyer, is sending both his children back to overnight camp and feels fortunate he can. His 12-year old son goes to Camp Kabeyun in Alton Bay, N.H., where Metzger attended camp four decades ago. Friendships he made have endured, Metzger said, and he wants the same experience for his children.

"I wouldn't characterize it as a luxury," said Metzger. "A lot of important life learning goes on there. Obviously it's a hard time for camps right now, but I really hope they survive."

Camps come in many varieties, of course, and lower cost ones might benefit from an economy that makes higher priced models unaffordable to many. But even these camps are working hard to fill their cabins this summer.

Camp Hazen, a nonprofit YMCA camp in Chester, Conn., offers day and residential programs and caters to what director Danita Ballantyne calls "middle-class families who understand the value of camp" but can't afford super-expensive ones. Beginning last year, the camp instituted a three-tier fee structure based on the honor system.

Day camp enrollment at Hazen is nearly full and residential numbers running slightly ahead of last year, according to Ballantyne, who attributes this to the camp's efforts to stay connected with families over the off-season. Still, she said, at least one longtime camp family is switching from residential to day camp this year to save on fees.