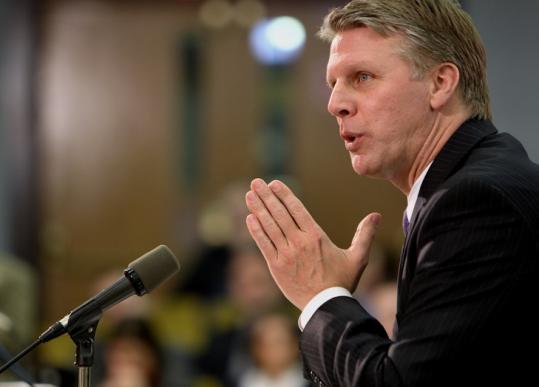 State Treasurer Timothy P. Cahill is facing a state ethics inquiry for awarding a $21 million state lottery contract to a company that was secretly paying Cahill's close friend and fund-raiser, Thomas F. Kelly, tens of thousands of dollars in consulting fees, according to multiple people who have been briefed on the investigation.

Investigators from the state Ethics Commission interviewed Cahill this month about his decision in 2004 to award the contract to to make scratch tickets, despite a recommendation from his own staff that Scientific Games receive less state work, said two of the people who have been briefed. Both spoke on the condition of anonymity because Ethics Commission investigations are confidential.

The investigators also have collected e-mails, campaign finance reports, and other documents, the people said. The investigation follows a Globe story in August that detailed Kelly's work on behalf of Scientific Games and Kelly's relationship to Cahill.

Cahill's office did not respond to a request for comment. The treasurer, addressing the issue in the past through a spokeswoman, has said that he was unaware of Kelly's financial relationship with Scientific Games.

The commission's inquiry comes at a politically sensitive time for the Democratic treasurer, who is considering running for governor next year, either as a Democratic primary challenger to Deval Patrick or as an unaffiliated candidate in the general election.

Ethics Commission investigators have asked at least one person about Cahill's level of knowledge of Kelly's financial relationship with Scientific Games and about political contributions the company's executives made to the treasurer.

That person said Scientific Games executives resisted the request, saying they would run a fund-raising event after Cahill made the decision on the contract.

Three months after the Lottery Commission gave the firm the work, Scientific Games' chief executive, A. Lorne Weil, held a fund-raiser in Manhattan at the Water Club, a pricey restaurant on the edge of the East River. Campaign reports show that Weil and his associates raised nearly $20,000 for Cahill's campaign committee at the Oct. 26, 2004, event. Cahill, as treasurer, chairs and controls the commission.

Scientific Games said in a statement last week that it was chosen to continue its work because of the quality of its services. The company is the leading producer of scratch lottery tickets in the world, and it has contracted with the Massachusetts lottery since its creation in the early 1970s.

"Scientific Games won these contracts through competitive processes because we offered technical superiority and the best value," the statement reads. It would not respond to questions about its fund-raising activities or to questions about whether Kelly made requests of the firm's executives to donate to Cahill.

The ethics inquiry comes in the middle of a new bidding process in which Scientific Games is seeking another multiyear contract to develop instant games and print tickets. The state's instant ticket lottery is considered one of the highest performing in the world when measured on a per-capita basis, with $3.3 billion in annual sales. Scientific Games has also been prominently mentioned by state Treasury officials as a possible bidder on licenses to operate slot parlors under a plan that Cahill proposed this month.

A Rhode Island gaming firm, Bingo Innovative Systems, filed a $20 million lawsuit against Cahill and the lottery's executive director, Mark Cavanagh, in December, charging that Scientific Games has been granted a "most favored contractor status" based on the firm's fund-raising for Cahill's political committee. It described it as a "pay-to-play" scheme.

The lawsuit cited the Globe's report in August of Kelly's role helping Scientific Games. It also cited the fund-raiser in New York. Cahill aides have said the charges in the lawsuit are "outrageous" and counter that the allegations are tainted because they are coming from a company that is in a contract dispute with the commission.

At the time the contract was up for rebidding in 2004, Kelly was collecting $3,000 monthly payments from Scientific Games. The money was not paid directly by the company, but through Scientific Games' public relations adviser, Regan Communications, which then billed Scientific Games for Kelly's payments, according to invoice documents the Globe obtained.

Overall, Kelly collected about $200,000 from the company between late 2003 and late last year, when Scientific Games fired him after it learned - through a Globe story - that he also had contracted to consult with Bingo Innovative Systems. He and the company said he did not lobby, but after the Globe's August story and under pressure from Secretary of State William F. Galvin, Kelly registered as a lobbyist for Scientific Games in 2007 and 2008.

Kelly, while on Scientific Games's payroll, signed a contract with Bingo Innovative in 2005 and again in 2006 in which he stood to make as much as $2.4 million. The fees would be generated from a deal the firm and he were trying to broker with the Massachusetts Lottery Commission for a televised bingo game.

According to Globe interviews and documents supplied by Bingo Innovative, Kelly, beginning in late 2003, arranged and attended several meetings for its executives to meet the treasurer, both in his office and at fund-raising events that he threw for Cahill.

Galvin's office is investigating Kelly's Bingo Innovative arrangement. Contracts based on success fees in lobbying are illegal under state law. Kelly said that he acted only as a "marketing agent" for the firm and his contacts with the treasurer and that the commission's staff did not constitute lobbying. Galvin said last week that his investigation is hampered because of a lack of documentation and the amount of time that has passed since the activities took place.

© Copyright 2009 Globe Newspaper Company.
Related Coverage
Your comment is subject to the rules of our Posting Policy
This comment may appear on your public profile. Public Profile FAQ