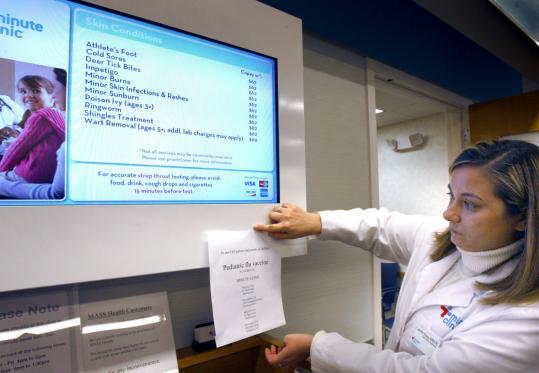 In a state renowned for its elite teaching hospitals and high- technology medicine, the of medicine is thriving.

Six months after the first MinuteClinics opened in the state, thousands of Massachusetts residents have visited the in-store clinics for treatment of sore throats, bronchitis, and the flu.

With MinuteClinics opening at a rate of more than two a month in the state, company executives said they have taken off here faster than in the 24 other states where the company owns clinics. Nurse practitioners at the 16 Massachusetts clinics open so far have treated more than 10,000 patients with acute problems and given about 10,000 flu shots, the executives said.

The patients are drawn by the clinics' walk-in policy and convenient night and weekend hours at a time when many primary care physicians are turning away new patients. And customers are not deterred by the absence of physicians or the Spartan surroundings, tucked among aisles of cold remedies and snack food.

"Massachusetts does have some serious access problems in terms of physician availability," said retail medicine consultant and analyst Tom Charland, head of Minnesota-based Merchant Medicine LLC, "so it doesn't surprise me people are using these clinics. They may go to their Harvard-educated doctor for something serious. But if you have a bladder infection on a Friday, you're not going to suffer until Monday if you have a nurse practitioner who will see you down the street in a CVS store."

Another major factor in the clinics' success, he said, is that the state's three largest insurers cover the visits without a physician's referral.

Doctors, who generally opposed the state's decision to allow retail clinics to open in Massachusetts, said they have mixed opinions of how MinuteClinics are treating their patients so far - some have complained of inappropriate antibiotic prescriptions - but they have not seen serious problems with the care or a significant impact on their practices. The state Department of Public Health, which regulates the clinics, said it has received one complaint about a MinuteClinic, from a hospital, but can't release details during the investigation.

The company recently closed 90 clinics in several other states for the non-winter months, when business slows. But CVS continues to open year-round clinics in Massachusetts and plans to have a total of 28 by the end of this year. Company executives would not release detailed visit numbers by clinic or by state.

Patients who arrived for care on a recent morning at the MinuteClinic on in Medford - which opened in November and is one of the busiest sites, according to CVS - said they came for the convenience.

"It can be hard to schedule an appointment on short notice with my pediatrician," said Russell Weiss-Irwin, 16, whose father brought him in for a persistent sore throat and headache. "This was very quick." Nurse practitioner Jennifer Krasco swabbed his throat to test for strep and sent the sample to a lab.

Also that morning, Elaine Eberth, who is in her late 60s and just got over a cold, wanted someone to listen to her lungs to make sure she didn't have pneumonia. Her doctor's office is in Boston, and she didn't want to make the trip from Medford for a 10-minute visit.

Doctors said that Minute- Clinic nurse practitioners, as the company promised, are sending physicians detailed visit notes for patients they have treated. But, they said, some patients have been prescribed antibiotics when they weren't needed.

Dr. Poul M. LaPlante, a family practitioner near the Medford clinic, said three of his patients have gone to MinuteClinic recently for sinusitis, though his office had appointments available. They were given antibiotics, which he did not think was warranted; sinus infections are usually treated with steroid nasal sprays, he said.

"I was a little distressed by that," LaPlante said. "They don't have any ongoing relationship with the nurse practitioner. When they see me, I can usually call on their trust in me when I say they don't need antibiotics."

LaPlante said he has not asked the patients why they went to MinuteClinic. "It's a touchy subject with me. I feel sort of jilted and I don't want to convey this to the patients," he said. "But if someone is going on a repeated basis I need to ask them what is going on."

Dr. Andrew Escoll, a family practitioner in Tewksbury, said 10 of his patients have used the nearby MinuteClinic. He said that the clinic quickly sent him treatment notes, but that he also has seen overuse of antibiotics, a concern because it can lead to treatment-resistant bacteria.

Overall, he said, "they are actually doing a good job for what they're doing," Escoll said, but he remains philosophically opposed to the idea, in part because of the missed opportunity to discuss health screenings with patients. "People are always running to their doctor with colds. When they do, I can usually address a whole list of other things, like when they need a pap smear or colonoscopy," he said.

Carolyn Castel a spokeswoman for CVS, said she could not comment on the complaint to the health department because it is under investigation. As for antibiotic overuse, she said MinuteClinic nurse practitioners follow a strict protocol of best practices, so that overall variation is probably less than in other healthcare settings.

Retail healthcare could expand in the state. MinuteClinic is negotiating with the state to get reimbursed for treating low-income Medicaid patients. And Walgreens has applications pending for 17 retail clinics, although a spokesman said last week that the timing is undetermined.

Charland said that to be ultimately successful, clinics must make money during the non-winter months, because much of the services they provide are related to colds and the flu. The other wildcard is whether doctors will adapt to win back some of this business by expanding hours.

"Patients are best served when they have a place they can get primary care in a coordinated way, rather than care that is spotty and episodic," said Dr. Bruce Auerbach, president of the Massachusetts Medical Society, which represents the state's physicians. But, he said, "we need to respond to our society and their demand for access at times that work for them."