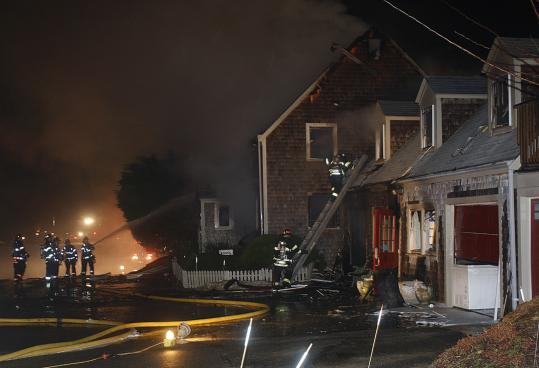 BARNSTABLE - A three-alarm fire fueled by an explosion destroyed a massive section of an animal hospital and kennel last night, killing at least one dog and one cat. Many of the other animals were rescued.

The cause of the blast remains unknown, but the building at the time may have been connected to a natural gas-powered generator located where the explosion occurred, officials said.

No one was seriously injured in the explosion and fire, which occurred at the Cape Cod Animal Hospital and the attached building, the Cape Cod Farm Kennels, on Osterville Road. The hospital's owners rushed to rescue about a dozen cats and dogs that were in the kennel at the time.

"It was a bit of pandemonium, but it could have been a lot worse," said Vicki Karras, the kennel manager, last night.

The explosion was first reported at 8:04 p.m. Scott Munson, a veterinarian who bought the hospital with his wife in 1994, said they were in the kitchen of their home, located about 50 feet away, when they heard a loud bang. They saw flames in the front wing of the two-story, wood-framed building, which was built in the 1930s. The explosion occurred in the front wing of the building where the hospital is located, Munson said.

He and his wife, Heidi McMorrow, a fellow veterinarian, rushed to save the animals in the rear wing of the kennel.

Fire Chief John Farrington said several animals may have perished. "We think at least two [died] and probably some more," he said.

Farrington said firefighters heard another explosion minutes after they arrived, but the nature of the second blast was not clear last night. As of 11 p.m., firefighters were still trying to douse hot spots.

The fire and explosion are under investigation, Farrington said. He said firefighters identified a heavy gas odor when they arrived, and that utility companies National Grid and were notified and on the scene last night. Power was shut off to the area.

State Fire Marshal Stephen Coan said that detectives with his office were dispatched to the site, but he could not speculate on any cause for the fire.

The kennel is located on the border of the Olde Barnstable Fairgrounds in West Barnstable. The hospital and kennel were lit up last night by heavy flames and smoke.

"The flames were probably 20 to 30 feet in the air," said Jeff Stranger, a volunteer with American Red Cross, who arrived at the fire within a half-hour to see the building engulfed.

Fire departments from Sandwich, Mashpee, Cotuit, and Yarmouth responded to the blaze, according to a Fire Department official.

A male puggle, a male boxer, and a large male black Labrador retriever were lost during the bedlam of running out of the building, Karras said. She asked residents to watch for the dogs, and asked anyone who sees them to call 774-487-1329.