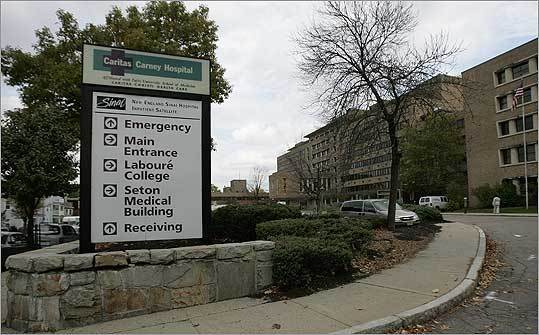 (Globe archive/Suzanne Kreiter) The Caritas Christi Health Care network, whose Dorchester hospital can be seen in this photo, is considering joining with a company that offers abortions.
By Kay Lazar Globe Staff / March 4, 2009
Text size – +

Catholic and antiabortion groups in Massachusetts are criticizing a proposal by the Caritas Christi Health Care network, an affiliate of the Catholic Archdiocese of Boston, to join forces with a nonreligious health organization that would cover abortions and other "confidential family planning services."

The joint insurance venture with a St. Louis company - part of Caritas's proposed entry into the state's subsidized health program, Commonwealth Care - was unveiled last week and drew protest over the weekend.

"This appears to be an appalling betrayal of Catholic principles and a grave scandal," said C. J. Doyle, executive director of the Catholic Action League of Massachusetts.

Anne Fox - president of Massachusetts Citizens for Life, one of the state's largest antiabortion organizations - said she has heard from so many members that the group's executive committee will address the issue at a meeting tonight,

"It looks to me as though . . . an entity has to give up certain of its basic principles, and that just doesn't hang right," Fox said.

Yesterday, Caritas responded by saying it is only considering the partnership with Contracts with healthcare providers would be negotiated by Centene, not the archdiocese, Caritas said, and Caritas hospitals will make up only six of the 39 hospitals and 66 health centers providing services under the plan. The statement also makes clear that Caritas hospitals will not provide abortion services, saying that "at all times and in all cases" Caritas will follow Catholic moral teaching, as well as a set of ethical guidelines for Catholic hospitals issued by the US Conference of Catholic Bishops.

State regulators are scheduled to vote March 12 whether to accept the Caritas-Centene bid, as well as four others submitted by companies already providing coverage in the state's subsidized system.

The abortion issue was first raised Thursday, as the state's Connector Authority, which oversees the subsidized insurance program, was reviewing bids from insurers, including the new Caritas-Centene proposal. A Connector Authority member said she was concerned that low-income women might not receive full services under the Caritas venture because the Catholic hospital network does not provide abortions.

Later that day, Caritas and Centene Corp. released a one-sentence statement that said the venture "will contract with providers, both in and out of the Caritas network, to ensure access to all services required by the authority, including confidential family planning services."

The additional statement released yesterday by Caritas spokeswoman Teresa Prego was more detailed as it responded to the growing c,horus of criticism.

"Applying for participation in the [state program] is a complex public policy process," it said. "We will carefully investigate all aspects of this proposed relationship in order to insure that Caritas Christi's participation will be in accord with Catholic teaching."

While state regulators presented the proposed Caritas-Centene bid last week as a "joint venture," Caritas characterized its participation yesterday as a "minority investment." It also said the venture, to be called Commonwealth Family Health Plan, has filed for licensing by the state Department of Insurance.

The Caritas statement further said that "at all times and in all cases we will observe the Ethical and Religious Directives of the United States Conference of Catholic Bishops and the basic principles of Catholic moral theology."

The bishops' directives, which guide Catholic healthcare providers that are forming new partnerships with other providers, state that "Catholic healthcare organizations are not permitted to engage in immediate material cooperation in actions that are intrinsically immoral, such as abortion, euthanasia, assisted suicide, and direct sterilization." The directives also state that sensitive decisions should be made in consultation with the diocesan bishop or his healthcare liaison.

Asked about the issue, Terrence Donilon, spokesman for the Boston Archdiocese, said in an e-mailed statement that "Caritas is the appropriate agency to respond," and declined further comment.

It was hardly the first time Caritas officials have had to walk a fine line between state regulation and Catholic teaching. In December, NARAL, an abortion rights group, said a survey it conducted of 70 hospital emergency rooms statewide revealed that all but two provided emergency contraception to rape victims, as required by a 2005 state law. The two that said they did not were Caritas hospitals, Caritas St. Elizabeth's Medical Center in Brighton and Caritas Holy Family Hospital in Methuen, according to NARAL.

Caritas responded to NARAL's concern with a December statement that said it trains staff to abide by the Massachusetts law and "in all cases, clinical staff follow established protocol while treating each patient with dignity and compassion."

It announced late last year that it plans to lay off about 160 workers to cut expenses. It also said a $100 million financing deal it planned with Ascension Health of St. Louis, another Catholic healthcare organization, is on hold because of the recession.

Michael Paulson of the Globe staff contributed to this report. Kay Lazar can be reached at klazar@globe.com.

'Caritas is the appropriate agency to respond,' said Terrence Donilon, spokesman for the Archdiocese of Boston.