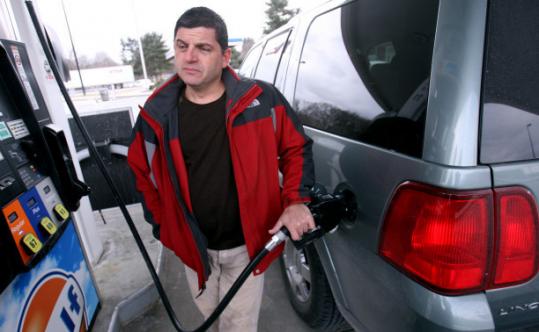 Massachusetts motorists yesterday greeted the prospect of paying the highest gas tax in the country with a mixture of anger, wincing resignation, and measured support as a way to help fix the state's dilapidated transportation system.

Governor Deval Patrick, who formally unveiled the proposal to raise the tax by 19 cents a gallon, seemed conflicted himself as he abandoned previous statements opposing the gas tax hike or calling it ill-timed as families struggle through a recession. Now, his proposal would not only raise the gas tax, but continue to increase it yearly with the rate of inflation.

Patrick, the first governor in two decades to propose a broad-based tax increase placed much of the blame on his predecessors, saying that their poor decisions and the "Big Dig culture" had left him and Massachusetts residents with a painful choice: paying up or living with deteriorating bridges, high subway fares, and $7 tunnel tolls.

"The days of avoiding the truth and the consequences must end and end now," he said. "Don't just criticize from the sidelines and watch the situation get worse, as those before us have."

If approved by the Legislature, the increase would push the state's gas tax to 42.5 cents a gallon, just slightly more than New York's 41.3 cents, now the highest in the country. With the 18.4 cent federal tax added in, Massachusetts drivers may soon pay 61.9 cents a gallon in taxes.

The decision comes with political risk for Patrick, who has said he will seek reelection next year. Proposing tax increases creates a broad opening for a potential opponent, leaving him with an important sales job in coming months.

"Look, this is not where Deval Patrick wanted to be in the third year of his term," said Paul Watanabe, a political scientist at the University of Massachusetts at Boston. "Assuredly, there will be a considerable amount of distress raised by his proposal but . . . I think there are plenty of people who recognize that in some ways the sky is falling and something has to be done about it."

Patrick went to lengths yesterday to emphasize that his plan is about more than raising taxes. He said he would not sign an increase unless legislators pass the vast reorganization plan that goes with it, which includes future reductions in MBTA fringe benefits and other changes proposed two years ago by a government commission.

The plan also gives the administration more control over the state's transportation agencies, by, for example, replacing the MBTA board with a three-member committee that reports directly to the governor's transportation secretary.

A bill has yet to be submitted to the Legislature laying out details, but what administration officials have revealed - in bits and pieces to various news outlets and interest groups - appears to include a wide range of environmental, financial, and structural changes to attract or offend nearly every constituency in the state.

For example, after the press conference yesterday, officials revealed that they would reduce the toll discount that some Boston neighborhoods get at the Harbor tunnels or the Tobin Bridge.

The tolls would cost at least $2 for those residents instead of the current 40-cent fee at the tunnels and 30-cent fee on the bridge. At the same time, Patrick would add Winthrop residents to the discount program, which should help garner support from new House Speaker Robert A. DeLeo, who represents that town in the Legislature.

The plan also includes a provision floated earlier this week to charge higher vehicle registration fees for gas-guzzling cars and give discounts to fuel-efficient vehicles.

But other previously announced plans to eliminate tolls on the western portion of the Massachusetts Turnpike have been abandoned, as have plans to shift the turnpike authority's debt to the agency that runs Logan Airport.

Patrick explained some of the changes as tradeoffs in a tough environment, where needs still outstrip the $500 million he hopes to raise from the tax.

"All of it is tough," Patrick said. "There is nothing here that isn't a heavy lift."

Legislators have been cautious but open to the bill, saying they were eager to read details and begin debate.

DeLeo called it a "great beginning" while Republicans chided Patrick for shifting his position.

Patrick put pressure on lawmakers to act soon. The turnpike authority board is scheduled to vote on a hefty toll increase Tuesday that could raise tolls in steps beginning March 29. Patrick said lawmakers could act before that to avoid the hike or repeal the tolls increase later if the bill does not meet the deadline.

Commuters, though unaware of the details, were beginning to take sides, mostly depending on where they live.

"I mean, jeez, we just caught a break on the gas prices," said Kevin Moore, a 48-year-old Cambridge resident, as he stopped for $10 worth of regular at the Shell station on Memorial Drive. "I don't think it's a good plan at all."

But over on the Massachusetts Turnpike, Eileen MacKenzie had a different opinion: "I think the gas tax hike is a better idea, because from what I've heard about the toll hike, it was really going to be very high for the people that use it on an everyday basis. This is a little more equal."

A Globe poll in December showed that a gas tax hike did not have majority support, but was more politically palatable than toll hikes and other possible sources of new revenue.

To sell the increase, Patrick has to keep making the case, standing next to potholes around the state to demonstrate the need, said Jeffrey M. Berry, a political scientist from Tufts University.

"I think that he's vulnerable now of the charge of being a tax and spend liberal," Berry said, "whereas before he was just a liberal."

On the Pike, Joe Ciaramitaro did a quick calculation as he pumped 24.8 gallons into his wife's Lincoln Navigator. An extra 19 cents a gallon would be nearly $5.

With three children and a job as a buyer for a seafood company, the 41-year-old Gloucester resident logs a lot of miles. The hike could cost him $500 a year, he said.

"Between feeding, housing, clothing, and schooling, all I need is another increase in my taxes," he said. "You just can't keep taxing people to death."