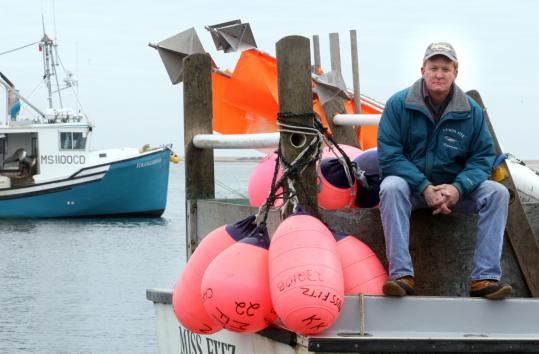 John Our said he once threw overboard thousands of pounds of cod, because of the way rules were applied. (BILL GREENE/GLOBE STAFF)
By Bina Venkataraman Globe Correspondent / February 21, 2009
Text size – +

CHATHAM - Until three years ago, John Our did what most fishermen do when they catch more cod in a day than they are allowed to bring ashore: He threw overboard thousands of pounds of the scarce and fabled fish, once so plentiful that it helped to spawn New England cities.

"I was discarding more fish per year than I was selling," Our said. The practice was doing little to replenish cod stocks, since many fish died after being returned to the sea.

Now, he is part of a new way to tackle overfishing, one that sets a yearly cod quota to be shared by the fishermen in a community and leaves it up to them to decide how much they catch each day.

This is one of the first attempts in the United States to manage a fishery in this manner, and the more than 35 fishermen from Chatham and Harwich who are participating are no longer subject to federal rules that limit the number of days they can catch cod and the amount they can bring to shore for each day they spend at sea.

"If I catch too many fish now, I'm not freaking out and tossing them over," said Our, who has also cut his expenses under the new system.

Fishermen in Gloucester, New Bedford, and other New England communities are clamoring for this approach to be expanded, as they face the possibility of even stricter limits on their catch of Atlantic groundfish. Last month, a federal agency proposed reducing the number of fishing days by about 18 percent and closing vast stretches of ocean to protect cod, flounder, and other vulnerable species.

Some small-boat fishermen in New England have already gone out of business under the existing rules. Many others are in danger of losing their vessels.

Fifteen years ago, federal regulators adopted the days-at-sea rule to try to bring back overfished species. But the rules have proven to be a burden to fishermen and have not revived most groundfish populations, said Peter Baker, director of the Pew Environment Group's campaign to "End Overfishing in New England." The New England groundfishery now consists of about 600 active boats, fewer than half the number fishing 15 years ago, Baker said. Most species, with the notable exception of haddock, remain overfished.

The community-based strategy is helping the fishing fleet here on the elbow of Cape Cod to survive despite depleted groundfish stocks.

Regional and national fisheries agencies permitted hook-and-line cod fisherman here to adopt the new approach in 2004, and gillnet fishermen, who sweep up cod while they are feeding on schooling fish, followed in 2006. The system has allowed the fishermen to catch more fish on fewer days and to streamline their operations and reduce waste. The more days a fisherman spends at sea, the more he has to pay for fuel, boat and gear maintenance, and a crew.

Without this approach, "most, if not all, of the hook fleet would be extinct," said Eric Brazer, fisheries policy and management coordinator for the Cape Cod Commercial Hook Fishermen's Association and the manager of the Chatham and Harwich groups.

The groups divide their yearly quotas based on what each boat has caught historically. Participation is voluntary, and the fishermen pay 5 percent of their earnings after fuel costs to the association for legal fees and monitoring, which this year came to about $10,000 per boat. The association sends observers on about a fourth of the fishing trips and has installed tamper-proof video cameras on a few boats to watch what is caught.

Now 17 additional groups of fishermen from ports from Montauk, N.Y., north to Maine are requesting permission to shift to a community-based quota system. They have persuaded the New England Fishery Management Council, the regional agency that manages fisheries, to recommend that federal regulators shift to this system for the majority of the nation's groundfishing fleet by next year.

Among those pushing for the community approach is Glen Libby, a second-generation fisherman out of Port Clyde, Maine, and chairman of the Midcoast Fishermen's Association, which represents 18 groundfishing vessels.

"You could say that just about everybody here is on the edge of going out of business," Libby said. "There's been a steady decline since 2001."

The National Marine Fisheries Service, the federal agency that sets fishing rules, says that it supports the community-based approach, but that time is needed to adopt the system in more areas and for more types of fish. Each fisherman's catch must be monitored over time to ensure that annual quotas are not exceeded, the service says.

David Terkla, an economist who specializes in fisheries at the University of Massachusetts at Boston, said that for the shared limits to work as they have on the Cape, fishermen should interact frequently, so violating the rules by fishing too much, for example, is not acceptable behavior.

"You need a group that's cohesive and identifiable, so that certain customs operate," he said.

The cod fishermen here say that meeting face-to-face has helped them, but that they had to overcome long-standing animosity between fishermen who use different types of gear.

"We used to scream at each other," said Eric Hesse, a hook fisherman from Harwich.

For all its appeal, the community catch limit does not ensure that small-boat fishermen will stay in business. If there are fewer fish in the sea, the yearly quotas will continue to drop, which means that fewer fishermen will be able to make a living.

Still, said Terkla, "there's hope that the fishermen will be able to manage this in a better way than the blunt way we've done it from afar."

Correction: Because of an editing error, a Metro story Saturday about a new way to regulate cod fishing overstated the impact of existing rules on fishermen. Some small-boat fishermen in New England have gone out of business.