Told firefighters they could leave the scene 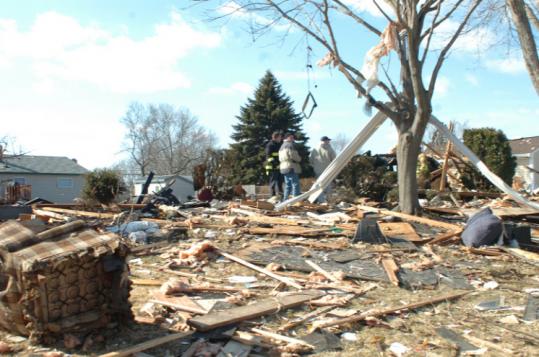 SOMERSET - Minutes before a house exploded here this week, the third to explode in Massachusetts within the past three months, a utility crew responding to reports of a gas leak sent firefighters from the scene, telling them the gas company had the situation under control, the town's fire chief said yesterday.

Chief Scott Jepson said firefighters had been knocking on doors Thursday evening to check for elevated gas levels. When New England Gas Co. crews arrived, they told the firefighters they would dig into the street to check the leak, he said.

But they never shut off the gas supply to the area, and may not have had time to do so. Within 20 minutes of their arrival, a single-family house erupted in flames after the blast. Rose Marie Rebello, 62, and her dog were both found dead afterward. The massive explosion sent debris throughout the area, injured a firefighter and a utility worker, and forced 200 neigh bors to evacuate.

"Basically, they said there's nothing much further for you right now . . . as far as fire services," said Jepson, adding that utility crews said the leak was probably in the street and had called in heavy digging equipment.

The spate of house explosions - a man died in December in Scituate and another man was severely injured last month in Gloucester - has raised concerns that the state's roughly 20,000 miles of pipelines, many of them decades old, have become a threat to public safety. Utility officials and fire investigators did not link the three explosions, but others argued that the state needs to repair any pipes that have corroded.

"I would say these explosions are early warning flags, if nothing else," said Stephen Connors, director of analysis at the MIT Energy Initiative. "There's a body of evidence that our infrastructure is reaching old age and it needs the equivalent of a knee and hip replacement. This is not a new issue. We want to keep water, gas, and electricity rates down, but we don't want to keep them down so much that it endangers public safety."

New England Gas Co. officials declined to comment yesterday on their response to reports of a strong gas odor in the neighborhood before the blast.

"NEGC is working with state and local authorities in their investigation and to safely restore gas service to the area," said Robin Weinberg, a spokeswoman for the company, which serves 53,014 residents and businesses from Fall River to North Attleborough. "We will not comment on the cause of this accident before that investigation is completed."

Laura Sheehan, a spokeswoman for the American Gas Association, a Washington-based group that represents gas distributors around the country, noted that 171 million Americans use natural gas in their homes.

"I don't think you can say these explosions are indicative of the degradation of the pipelines throughout the country," she said, noting that federal figures show the number of fatalities declined from 23 in 1998 to five last year, and the number of injuries dropped in half during the same years. "There's no reason for panic."

State officials said they're investigating, but insisted that gas explosions are so rare that homeowners should not be concerned.

They also noted that the state requires utility companies to respond to complaints of gas odor within an hour, and according to the latest available data, New England Gas responded to all complaints in 2007 within an hour.

"This is a tragic situation, as are the two other recent house explosions in Scituate and Gloucester," said Lisa Capone, spokeswoman for the state Department of Public Utilities, which oversees gas companies. "These three explosions are, however, three separate incidents, each with a unique set of circumstances - including the involvement of three gas companies. There is no reason at this time to think they constitute a trend. There are 1.3 million households in Massachusetts that are served by natural gas, and there have been nine explosions in the past five years."

But others said the three explosions raise serious questions.

State Representative Patricia A. Haddad, a Democrat from Somerset, said: "We have to take a good look at what's going on." "You have to take a bigger-picture look at this," she added. "One [explosion] is awful, two you start to scratch your head, and three you say, 'What's going on?' "

Neighbors said they were worried.

"I'm very concerned and upset that this is actually happening, and that the potential for it to happen again is high," said Tracy Furtado, 37, whose home sustained minor damage. "I think gas companies need to come up with a better way to prevent these types of accidents."

Manuel DeAlmeida, another neighbor, said the gas company "should have gotten people out of their homes as soon as they came, because the gas smell was so strong out there," he said.

Jepson said the fire department received a call at 5:10 p.m. Thursday from a resident complaining of a strong gas odor on New York Avenue. Firefighters and gas crews were dispatched to the street, with firefighters arriving first. Firefighters found no elevated gas levels in any of the homes they checked, Jepson said.

State Fire Marshal Stephen Coan said firefighters knocked on Rebello's door at 93 New York Ave. but no one answered. "We can't speculate on whether she was unconscious or not at that point," he said.

He declined to comment on whether the utility crew acted inappropriately by calling off firefighters, but said they appear to have followed protocol and it doesn't seem they could have turned off gas before the blast.

"They were still in the process of isolating the street gas main that would have allowed them to isolate that portion of the pipeline where the leak was," Coan said. "They were preparing to isolate the street shutoffs. That's normal procedure."

Local officials did not blame the utility company.

"It's just a terrible tragedy here," said William Meehan, selectmen chairman. "I don't know what the procedures are, but I was told all the normal procedures were followed."

At the scene yesterday, most residents were back in their homes with power restored. While teams of firefighters, police, and gas crews went house to house, continuing to investigate, colleagues and relatives described Rebello, a mother of two, as a warm woman who loved her dog, which they described as a "hot dog."

"I'm really jolted," said Jim Carey, a cousin who lives in a house behind hers. "Her death is a great loss to the neighborhood."

Joe DeMelo, a co-worker of Rebello's at Matrix, Inc., an injections molding company in East Providence, R.I., said she enjoyed playing Uno, a card game, before her overnight shift began.

"She was just a great person, always a smile," he said.