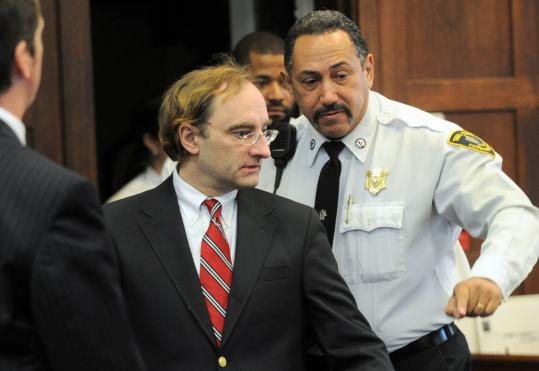 The man who calls himself Clark Rockefeller, shown above in court in December, suffered from a ''mental disease or defect'' at the time of his daughter's alleged kidnapping, his lawyer said. (Ted Fitzgerald/Pool/File)
By Jonathan Saltzman Globe Staff / February 14, 2009

The man who has called himself Clark Rockefeller is contending that he was legally insane when he allegedly kidnapped his 7-year-old daughter last summer on a Back Bay street.

Rockefeller's lawyer, Jeffrey A. Denner, filed a motion yesterday in Suffolk Superior Court saying his client was not responsible for the abduction that made international headlines because he suffered at the time from a "mental disease or defect" that made it impossible for him to understand why his actions were wrong or to control them.

Denner, who began publicly laying the groundwork for an insanity defense last month, telling reporters that his client was mentally ill when he allegedly abducted Reigh Storrow Mills Boss, declined to identify the disorder in a bare-bones filing and in a brief interview. He said a psychiatrist he hired determined that Rockefeller suf fered from a mental illness during the kidnapping. The defense team may disclose more details Tuesday at a pretrial court hearing.

"Suffice it to say at this point, that [the psychiatrist] believes that Mr. Rockefeller's condition meets the requisites of the law in Massachusetts for insanity and lack of criminal responsibility," Denner said. "I'm not going to get any further into that."

Jake Wark, a spokesman for Suffolk District Attorney Daniel Conley, said Rockefeller's defense strategy "in no way changes our determination to see justice done. Our confidence is undiluted, and we continue to prepare for trial."

Despite a widespread perception to the contrary, insanity defenses are rarely successful, and defense lawyers typically use them for far more serious instances such as in murder cases. Some criminal lawyers said the defense might fare better in the Rockefeller case because the stakes are lower and because jurors might accept Denner's contention that his client was motivated by love for his daughter.

"Certainly when it comes to a parent's concern for their child, they often do things that are irrational to begin with," said John Salsberg, a Boston defense lawyer. "And if on top of that that individual does have some mental illness, then what they do really won't make any sense. It may be the best defense. It may be his only defense."

Denner also filed a request for the court to delay the trial, tentatively scheduled to start March 23, until May 11. He said he needs time to prepare the insanity defense and file other motions, including a request to move the trial from the Suffolk court to another part of the state, perhaps northwestern Massachusetts or Cape Cod.

Wall-to-wall news coverage of the case in the Boston area, he said, would make it hard to pick an unbiased jury, although the abduction and revelations about Rockefeller's many identities made news throughout the United States and Europe.

Authorities say Rockefeller is really Christian Karl Gerhartsreiter, a 47-year-old Bavarian-born German citizen who came to the United States as a foreign exchange student in the late 1970s and became a con man extraordinaire. Through the years, authorities and people he encountered say, Gerhartsreiter used a slew of aliases and claimed aristocratic bloodlines to ingratiate himself into tony circles from Los Angeles to Manhattan to Beacon Hill.

In recent years, he allegedly led people, including his former wife, Sandra Boss, an executive at the consulting firm McKinsey & Co., to believe that he was somehow related to the storied Rockefeller dynasty. Members of the family denied any connection shortly after the alleged kidnapping.

Boss, who is Gerhartsreiter's former wife, declined to comment through a spokesman.

On July 27, Gerhartsreiter allegedly snatched his daughter from a Back Bay street during a supervised visit, triggering a mammoth search. He was arrested six days later in Baltimore, where he was living as Charles "Chip" Smith.

His daughter was reunited with her mother, and they are both presumed to be living in London.

Until this week, it had seemed likely that Gerhartsreiter would plead guilty to at least some of the charges he faced to avoid a trial that is likely to become a spectacle.

Assistant Suffolk District Attorney David Deakin told Judge Carol S. Ball on Jan. 22 that prosecutors would recommend Gerhartsreiter serve 4 1/2 to 5 years in prison, the maximum penalty for parental kidnapping, followed by 15 years' probation, if he pleaded guilty to all of the charges against him.

Denner told reporters he planned to recommend a lighter sentence. But plea negotiations collapsed this week, and both sides began preparing for a trial.

Los Angeles authorities have also labeled Gerhartsreiter a "person of interest" in the 1985 disappearance and presumed killings of a California couple, John and Linda Sohus. Gerhartsreiter was living in a guest house on their property in San Marino, an affluent Los Angeles suburb, when they vanished.

Steve Whitmore, a spokesman for the Los Angeles County Sheriff's Office, which has tried unsuccessfully to interview Gerhartsreiter at the Nashua Street Jail since his arrest, said the investigation into the couple's disappearance is continuing and that his office, once again, encourages the defendant to speak to investigators.

"We have said that from the beginning, and we will keep saying it," he said.