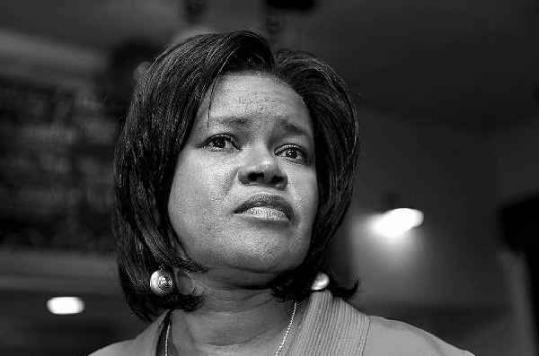 Dianne Wilkerson, who resigned her state Senate seat over a federal bribery indictment, was told by ethics officials she could take funds as long as she did not do so in exchange for a vote. (John Bohn/ Globe Staff/ File 2008)
By Donovan Slack Globe Staff / February 11, 2009
Text size – +

A Massachusetts legislator is calling for a gift ban to prevent business executives and other special interests from currying favor with public officials, after reports that former state senator Dianne Wilkerson received unreported checks of up to $10,000 from a variety of contractors and developers with business before the state.

Wilkerson has told the Globe that it was legal to solicit the large gifts of money from her supporters to help reduce large personal debts, as long as she did not accept any money in exchange for a vote.

Wilkerson received a confidential advisory opinion from the state Ethics Commission in 2003 that supported that practice, to the surprise of watchdog groups and many individual lawmakers at the State House who did not realize the law allowed such large undisclosed contributions.

"What I'm looking at is eliminating this altogether," said state Representative Martin Walsh, a Dorchester Democrat. "In the case of getting a loan or getting a gift in the thousands of dollars, it's not right."

The state currently bans a registered lobbyist from giving anything of value to a lawmaker, but the law is murkier when it comes to others with interests before state government.

The Ethics Commission advisory opinion written for Wilkerson cited a 2000 ruling by the Supreme Judicial Court that said that for a violation of the state illegal gratuities law to occur, there has to be an explicit link between the gift and an official act. State law requires lawmakers to disclose gifts publicly if their contributors later have business before the Legislature.

A package of ethics rules proposed by Governor Deval Patrick has already taken aim at the SJC definition of an illegal gratuity, seeking to tighten the law by making it illegal to donate or accept a gift "because of an employee's position."

Walsh says he wants to take it a step further, by banning all gifts from any nonrelative who has business directly or indirectly before a government agency. He plans to file an amendment to the governor's ethics bill.

Patrick is open to the idea. "If legislators have thoughts or proposals on how to strengthen our recommendations, we would be more than willing to work with them," said Patrick spokesman Kyle Sullivan.

A second lawmaker, meanwhile, state Representative Martha M. Walz, Democrat of Boston and a member of the special House Committee on Ethics that first took up the governor's legislation, wants to lift the secrecy surrounding advisory opinions such as the one Wilkerson received.

Walz has recommended an amendment that would require the State Ethics Commission to release publicly the advice it gives to public officials.

"I was shocked by the report of [Wilkerson's] personal fund-raising and greatly disturbed by the apparent link between those who gave her money and business in the Legislature or in her district," Walz said.

Walz said that before releasing its opinions, the Ethics Commission should black out the names of officials who requested them and other identifying information.

The Ethics Commission provided written advice and advisory opinions in an estimated 1,750 cases during the past five years, but only 14 of the opinions are publicly available.

A commission spokesman said the agency is against releasing all the advice it gives to public officials. Spokesman David Giannotti said the commission does not have enough staff to handle the task.

In addition, he said, the commission is concerned that public officials might not ask for advice as often, fearing their questions would be publicized, and that, without advice, they might break the law more frequently.

"It could have a chilling effect," Giannotti said.

Wilkerson was arrested in October and charged with accepting $23,500 in 2007 and 2008 from a Roxbury nightclub operator and undercover FBI agents in exchange for a liquor license and legislation allowing development of a parcel of land in her district. She has pleaded not guilty.

Since her arrest, Wilkerson has said she accepted payments from a variety of supporters to help eliminate her personal debt.

The Globe has reported that more than a dozen high-profile executives with interests before state government - including Columbus Center developer Arthur Winn, Big Dig contractor Jay M. Cashman, and Elizabeth Grady Skin Care chief executive John Walsh - cut checks to Wilkerson in recent years to help her pay off more than $70,000 in personal tax and mortgage debts, according to people briefed on the transactions who spoke on the condition of anonymity.

None of the executives has been accused of wrongdoing, and Wilkerson has not been charged in connection with any of those payments.

Wilkerson has said her own lawyers had vetted the fund-raising.

Another Ethics Commission opinion given to Wilkerson, in 1997, laid the groundwork for the personal fund-raising. It is addressed to Cheryl M. Cronin, Wilkerson's lawyer at the time. Winn said he sent his check in 2004 to "a prestigious lawyer." Two people briefed on the transaction identified that lawyer as Thomas R. Kiley, who was representing Wilkerson at the time.

Both are well-known ethics lawyers. Kiley declined to discuss the Wilkerson fund-raising or say whether he collected unreported contributions on her behalf.

"If that were the case, it's not the kind of thing I could talk about," Kiley said. "My role in representing Dianne is a confidential matter."