FBI searches a condo in Cambridge 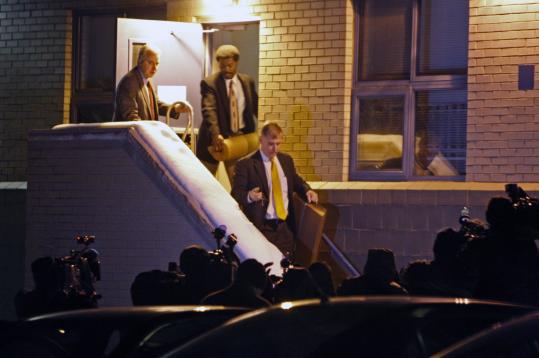 FBI agents carrying items seized from an apartment building on Gore Street in Cambridge walked out before a phalanx of television photographers. Five boxes and a computer were removed, but the FBI would not comment on their contents. (JIM DAVIS/GLOBE STAFF)
February 5, 2009
Text size – +

This story was reported by Jonathan Saltzman, John R. Ellement, Milton J. Valencia, and David Abel of the Globe staff. It was written by Saltzman.

CAMBRIDGE -- FBI agents and State Police investigators searched a Cambridge condominium yesterday that is the longtime home of a leading suspect in the 1982 deaths of seven people from cyanide-laced Tylenol capsules in the Chicago area, one of the most notorious unsolved crimes in the last generation.

The first-floor condominium belongs to James W. Lewis, 62, of 170 Gore St., who spent 12 years in federal prison for trying to extort $1 million from the painkiller's manufacturers, but was never charged in the killings. The authorities spent most of the day yesterday inside the six-story, yellow brick building and searched a storage facility at an undisclosed location in the city.

The Chicago office of the FBI released a statement late yesterday saying that FBI agents, the Illinois State Police, and several local police departments were "conducting a complete review of all evidence developed in connection with the 1982 Tylenol murders," which prompted dramatic changes in the way almost all food and medical products are packaged. "This review was prompted, in part, by the recent 25th anniversary of this crime and the resulting publicity," the statement said.

The anniversary has led to numerous tips to police, the statement said. "Further, given the many recent advances in forensic technology, it was only natural that a second look be taken at the case and recovered evidence."

Last night, FBI agents from Boston and Chicago removed five boxes covered in evidence tape and a late-model MacIntosh computer from the condominium. They would not comment on the contents of the boxes. The FBI statement also said no one has been charged in the latest review.

Lewis has lived at the complex, three buildings with 100 units, since around 1995, when he was freed from prison. Messages left on his phone were not returned. There were conflicting reports from neighbors about whether he was home.

The seven victims of cyanidetainted Extra-Strength Tylenol -- four women, two men, and a 12-year-old girl -- died in 1982 after taking capsules that had been purchased from drugstores and groceries in the Chicago area. Someone had opened the capsules and replaced some of the acetaminophen with cyanide and returned them to the shelves.

The killer was never identified, but the deaths caused widespread panic and led to use of tamper-resistant wrappings on food and medical products.

Lewis, an out-of-work accountant at the time of the killings, was widely described as a prime suspect. But he insisted he had nothing to do with the product tampering and resulting deaths and said he was living in New York City at the time.

Lewis was sentenced to prison in June 1983 for demanding $1 million from Johnson & Johnson, parent of Tylenol manufacturer McNeil Consumer Products Co., "to stop the killing." Johnson & Johnson was his wife's former employer. Lewis admitted sending the letter demanding money, but said he never meant to collect it.

Johnson & Johnson spent more than $150 million to recall 31 million containers of Tylenol and on an advertising blitz to restore consumer confidence that is still considered to be a model public relations response to a crisis. After he was freed from prison, Lewis moved into the Gore Street condominium with his wife, Leann. He is listed as a partner in a Web design and programming company called Cyberlewis. On the firm's website, Lewis has a tab labeled "Tylenol" with a written message and an audio link in which a voice refers to him as "Tylenol Man."

He also posted a message on the website in 2007, the 25th anniversary of the killings, in which he criticized being labeled the prime suspect. "In a quarter of a century, I have not been able to escape the Tylenol Man label," he wrote. "A Google search of `James+Lewis+Tylenol' yields over 240,000 documents, and the list is growing. After 25 years of cringing in fear, I am tired of hiding in silence. I will not run and hide any more. I will now face this controversy head on."

Several neighbors at Lewis's condominium complex said yesterday that he is known around the building as "The Tylenol Man" and described him as a tall, thin man who jogged often and had a computer programming business. They said he seemed odd, often carried a suitcase, and has recently lost a lot of weight.

Colleen Bryant, a resident of the complex, described him as "a completely unremarkable looking man."

"He probably seems perfectly normal," she said, "but everybody knows who he is."

Walter Tarasewicz, 50, of Lisle, Ill., whose sister Theresa Janus was 19 when she, her newlywed husband, and a brother-in-law were killed in the poisonings in the only case that touched several family members, said yesterday that he hopes police have developed enough information to lead to an arrest. Especially for the sake of his father, he said, who is about to turn 80 and longs to see his daughter's killer found.

"They always told us that cases like this never go into the cold file, that they just don't always get the attention they deserve," Tarasewicz said, trying not to raise his expectations too high after more than 26 years.

"It's too early to tell, but obviously something's surfaced. All we can do is hope. We'd like to bring it to closure."

In 2004, Lewis was arrested on charges of rape, kidnapping, and other offenses in an attack on a woman in the building. After he had been jailed for three years, prosecutors dropped the charges the day Lewis's trial was to start in July 2007, when the victim refused to testify, according to the district attorney's office.

Lewis was also charged with murder in 1978 in the death of Raymond West, an elderly former client of Lewis's accounting business, in Kansas City, Mo. West's body had been cut up, stuffed into a plastic bag, and hoisted to an attic ceiling in West's home.

Charges were dismissed after a judge ruled that Lewis's arrest and a search of his home were improperly conducted.

In 2007, Lewis was interviewed several times in Cambridge by Roger Nicholson, who calls himself an "ambush journalist" and hosts The Cambridge Rag, a local access television show. One of the interviews is available online.

When questioned on the Tylenol and West cases, Lewis denied committing any crimes and refused Nicholson's request to take a lie detector test.

Yesterday, Nicholson, who lives in Cambridge, said he developed a rapport with Lewis and described him as extremely smart yet paranoid and sometimes delusional. Lewis stayed at Nicholson's house for several days in 2007, Nicholson said.

Lewis and his wife had an online accounting business and were honored by the Cambridge Chamber of Commerce, said Nicholson, who said he was surprised by the recognition, given Lewis's criminal record.

Nicholson said Lewis kept a collection of what Nicholson called souvenirs about the Tylenol killings, including FBI documents. Lewis promised to show him the collection, but never did, Nicholson said.

Nicholson said he has not been interviewed by the FBI.