Casinos, slots back on state agenda 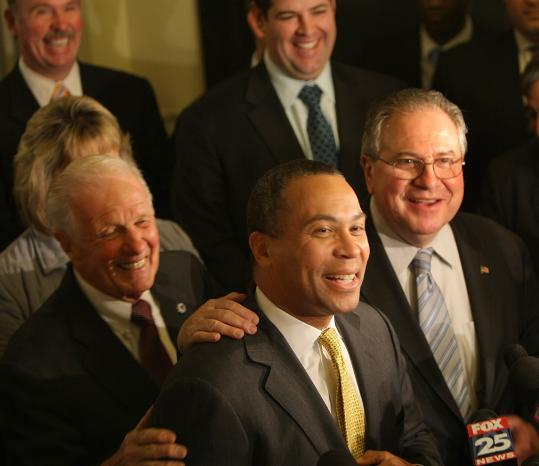 It's official: Slot machines and resort casinos are back on the Massachusetts political agenda.

Governor Deval Patrick and House Speaker Robert A. DeLeo briefly discussed expanded gambling yesterday during their first weekly leadership meeting since DeLeo, a supporter of gambling, was elevated to his post last week.

DeLeo and Patrick would not disclose details of their discussion, although one aide in the room said casinos took up only several minutes of a 90-minute meeting. But both said they were ready to move forward with a debate.

"Whether it can be done by April or May, I'm not so sure," DeLeo told reporters after the meeting. "But I feel there is going to be debate in the House relative to gaming legislation."

Senate President Therese Murray also attended yesterday's meeting, which was held in her office at the State House, but she did not speak with reporters afterward. She has expressed support for casino gambling in the past, and her spokesman re iterated her support yesterday.

While they made no progress on specifics, yesterday's exchange was notable because it represents a turnabout on the issue of gambling since Patrick's proposal to license three resort casinos went down in defeat last year, killed by the House under the leadership of DeLeo's predecessor, former speaker Salvatore F. DiMasi. DiMasi was a staunch gambling opponent.

While the issue is reemerging in 2009 in a friendlier political climate, there are significant differences between Patrick and DeLeo on gambling. Patrick wants to license resort casinos; DeLeo wants to put slot machines at race tracks, acknowledging that has been his parochial interests for years to protect Wonderland Greyhound Park and Suffolk Downs, which are in his district.

"But the art of compromise is what this building's all about," DeLeo said.

Patrick signaled yesterday that he would be willing to discuss installing slot machines at the racetracks as part of a political "horse-trading" process with the Legislature.

"If there is a proposal, and we get to a point where we're doing horse-trading, then I'm sure we'll take that up," Patrick said, when asked whether he would support slots at the racetracks.

Adding to the sense of momentum is the worsening economy, which has sent Beacon Hill leaders scrambling for new revenues. Patrick has proposed a host of new taxes to plug billion-dollar holes in the Fiscal Year 2009 and 2010 budgets.

Casino opponents, sensing the shift in the political dynamics, have begun talking about a referendum question that would delay consideration of the issue until the 2010 election ballot.

"I've talked to people who would immediately try to get it on the ballot in November of next year," said Representative Daniel Bosley, a North Adams Democrat and casino opponent. "I don't think they'd have any problem getting the signatures."

Bosley, a DiMasi ally, was chairman of the committee that narrowly issued a negative recommendation on the governor's casino legislation last year.

DeLeo may choose to appoint someone to replace Bosley but has yet to signal his intentions.

Fifty-seven percent of Massachusetts residents favor Patrick renewing his push for casino gambling, according to a State House News poll released yesterday that surveyed 400 registered voters and had a margin of error of 4.8 percent.

A Globe poll in December found that 57 percent of Massachusetts residents favor casino gambling, compared with 53 percent who supported it the previous year.

After his legislation was defeated by the DiMasi-led House last year, Patrick has not sought to revive his proposal, which would have licensed a casino in each of three areas of the state.

The gambling industry has struggled recently, with declining revenues at the Native American casinos in Connecticut and with the Twin River slot parlor in Rhode Island unable to meet its debt obligations.

"The resort casino idea was a good idea then, it's still a good idea," Patrick said yesterday before adding, "there are some other things we're working on right now that I think are more pressing."

Several state lawmakers, backed by politically powerful labor unions, filed a casino bill last month that largely mirror's the legislation Patrick filed last year. In a nod to the declining prospects for gambling revenue, they proposed selling licenses for $225 million each, instead of the $300 million that Patrick had estimated.

"It seems like there will be a lot more discussion on casinos and slots this legislative session," said Representative Martin Walsh, a Dorchester Democrat and one of the sponsors. "I feel comfortable that the speaker is going to allow a good open discussion."

Matt Viser can be reached maviser@globe.com.