Police officer injured in blast at home released from hospital 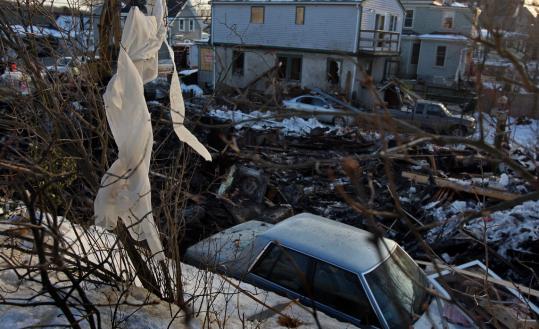 What was left of Officer Wayne Sargent's house in East Gloucester after an explosion tore through it Sunday. Sargent is recovering from burns to his face and hands and a head gash. (Michele McDonald/Globe Staff)
By Andrew Ryan Globe Staff / January 31, 2009
Text size – +

A Gloucester policeman was released yesterday from the hospital almost a week after a natural gas leak fueled an explosion that leveled his home.

Wayne Sargent, 59, was discharged from Massachusetts General Hospital in Boston, where he had been recovering from burns to his face and hands and a gash to the head.

"I think he is thankful and deeply touched by all the concern that everybody has shown," Beaudette said, adding that he still had a long road to full recovery. "A burn is going to heal much faster than the emotional wounds."

Sargent has found a place to stay, said Beaudette, who planned to visit him on Sunday.

A statement released on behalf of Sargent said he was "very grateful for all the thoughts, prayers, and concerns sent his way this past week. At this time, he is not yet healthy enough to grant any type of interview and would like to have his privacy respected while he heals."

On Thursday, fire officials determined that the explosion was caused by a break in a 6-inch gas main in front of Sargent's home at 76 Eastern Ave.

"The leaking gas entered the home and was then ignited by any number of possible sources inside," the state fire marshal and local officials said in a statement.

The officials said it was impossible to pinpoint the ignition source because the home was destroyed.

Neither leak has forced any evacuations, according to the Gloucester Times. Gloucester fire officials said no new gas leaks had been reported by yesterday afternoon.