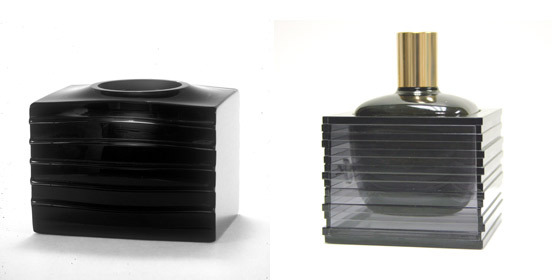 In 2006, hip-hop and fashion mogul Sean "Diddy" Combs launched a cologne with a citrusy scent and risqué marketing campaign - ads showed Combs sitting on a bed with two women - that made it a best-selling fragrance. Combs called it "Unforgivable."

But an influential glass artist from Pittsfield says a more appropriate name might be "Stolen" and forgiveness isn't on his mind.

In a lawsuit filed Wednesday in US District Court in Springfield, Tom Patti contends that the cologne's packaging - the bottle fits inside a stylish ridged plastic cradle - is a rip-off of two copyrighted tabletop glass sculptures he created in the early 1980s called "Compacted Gray With Clear and Ribs" and "Modulated Solar Airframe."

"A couple of years ago, my phone started ringing," the 65-year-old artist said yesterday in an interview. "Everywhere I went, people started congratulating me on the success of my fragrance container. I didn't know what they were talking about. Eventually, I realized that Combs had replicated my work."

Patti, whose works have been displayed in the Louvre and Metropolitan Museum of Art, said the fragrance bottle "has the same vocabulary" as his art pieces, including the exposed ridges and translucent gray color, but is a crass commercialization of his work.

He is seeking a halt to the use of the design and wants all profits traceable to the alleged copyright infringement.

Combs is one of a slew of celebrities to market fragrances, but his "Unforgivable" scent, launched by his Sean John fashion line in partnership with Estée Lauder Cos., became one of the biggest sellers in 2006.

A blend of Sicilian lemon, Moroccan tangerine, Tuscan basil, sage, cashmere, and rum, it was marketed as "the ultimate expression of masculine confidence and passion. . . . Unforgivable's vibe is explosive yet chill, sensual and sexy, much like the man whose name adorns the bottle."

Patti said people quickly noticed the resemblance between the bottle and his designs. So did art experts, according to the 19-page lawsuit. Last fall, The UrbanGlass Art Quarterly featured photographs of Patti's "Compacted Gray With Clear and Ribs" and the cologne bottle under the headline, " 'Unforgivable,' Indeed."

The magazine contacted the two credited designers of the fragrance bottle, James Gager and Johan Liden, about the strong resemblance, but they replied that the bottle simply reflected Combs's interest in architecture, according to the article.

Neither designer could be reached for comment yesterday. Both are listed among the defendants, along with Combs.

Patti said the two artworks he believes were copied have been extensively photographed and exhibited. The suit says "Modulated Solar Airframe" was shown in 2006 at the Heller Gallery in New York, where it was stolen and never recovered. At the time, it was on sale for $40,000.

"I believe they were aware of my work," Patti said of the designers of the fragrance bottle. "You don't just come up with that kind of a thing. It took me many years to develop it."

Although the suit seeks money for the alleged infringement, Patti said he is financially secure and that the case has more to do with his reputation.

"I take my work as one of the most important things that I do," he said. "It has a lot of meaning to me, and to see it compromised this way, I have strong objections to it."

"They never consulted him," he said of the bottle designers. "It's no different than taking someone's music."