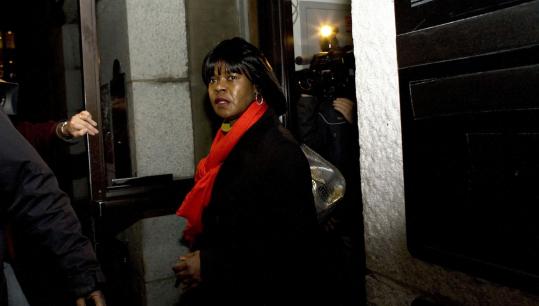 Dianne Wilkerson left the State House in November after announcing her resignation. Wilkerson resigned her seat last year as her colleagues in the Senate were preparing to discipline her. (Yoon S. Byun/ Globe Staff/file)
By Donovan Slack Globe Staff / January 25, 2009

Former state Senator Dianne Wilkerson said she routinely accepted money over the last decade from friends and political supporters - upwards of $70,000, some of it cash in unmarked envelopes - without ever reporting it on her campaign reports or tax returns.

Wilkerson disclosed her acceptance of the cash and checks in a recent interview with the Globe, saying she took individual financial contributions of up to $10,000 to help pay off mortgage and federal tax debts. The contributions, she said, were approved by the state Ethics Commission, vetted by lawyers, and within state and federal laws.

The interview was the first Wilkerson has given since her arrest in October on federal bribery charges, an arrest that was accompanied by stunning FBI surveillance pictures of Wilkerson allegedly accepting wads of cash from a cooperating witness who sought a liquor license for a Roxbury nightclub.

While she declined to discuss anything about the criminal charges, her description of the highly unusual personal fundraising effort provides a possible window into her planned defense.

"I have never, ever accepted money for any act as a senator," she said. "If they're going after corruption at the State House, I would be the 999th person on the list."

Federal tax laws allow individuals to give someone up to $12,000 without reporting it or paying taxes, but the provision is typically used by parents, grandparents, or other relatives seeking to transfer assets in their estate before death - not by politicians soliciting contributions from their supporters.

State law prohibits lawmakers from soliciting or accepting money and gifts from people with whom they have "official dealings," according to the state Ethics Commission website; campaign finance laws limit contributions by individuals to $500 a year.

"As long as I didn't take a vote in my official capacity as senator," she said.

According to the letter, a copy of which was obtained by the Globe, Wilkerson could accept gifts "well in excess of $50" from "close personal friends" as long as those people didn't have business before the Legislature. If they later did, Wilkerson was advised to publicly disclose that she had received the gifts. The letter said she was also prohibited from receiving gifts from people who sought her help for "a constituent service."

Despite Wilkerson's assertion, one of the people who gave Wilkerson the full $10,000 gift was Arthur Winn, one of the developers of the controversial Columbus Center project in Boston that would span the Massachusetts Turnpike, according to two people who were told about the transactions. Wilkerson voted in favor of state funding for Columbus Center in 2005, according to legislative records, and also lobbied state officials to provide additional state assistance to the developers.

The Ethics Commission would not comment, saying it was prohibited by law from disclosing anything about the advice it gives to public officials.

If the Ethics Commission did authorize Wilkerson's fund-raising efforts for personal use, it opens up an enormous loophole that would allow public officials to accept large sums of cash virtually unchecked, Wilmot added. She said that would be "unacceptable public policy."

The Ethics Commission has allowed personal fund-raising by politicians before. A public advisory opinion issued by the commission in 1992 permitted a state legislator to accept donations for a personal legal defense fund, provided that donors did not have business before the Legislature. That opinion also required the legislator to submit a public list of donors to the commission, something Wilkerson has not done.

But the two people who were told about the transactions said some of the donors were high-profile business operators. Among them was Dunkin' Donuts franchisee Clayton Turnbull, the two people said.

Turnbull, who owns several Dunkin' Donuts franchises in Wilkerson's district, said that he wrote her a check for $3,000 but that it was a personal loan, not a donation.

"She paid me back in full," he said. He declined to give details, including when he wrote the check, but he said he got the money back in 45 days.

Wilkerson supported Turnbull's controversial and ultimately successful bid to erect a Dunkin' Donuts on Massachusetts Avenue in the late 1990s, testifying in favor of the project at a zoning board hearing.

Turnbull said the loan had nothing to do with her support of his business interests.

"She was one of many that testified," he said.

Wilkerson resigned her Senate seat last year as her colleagues in the Senate were preparing to discipline her following her Nov. 18 indictment by a federal grand jury on eight counts of attempted extortion.

A three-hour conversation
Wilkerson spoke with the Globe in a wide-ranging, three-hour conversation at Victoria's Diner in Dorchester. Dressed in a tweed skirt with a black blouse and matching fur hat, Wilkerson ruminated on her financial dealings, her anger over the reaction of black clergy and colleagues to her arrest, and her deeply held belief that prosecutors have singled her out unfairly.

"Not so fast, you know," she said, reiterating her belief that it was not illegal to take money without reporting it. "If that was the law, we'd all be in jail. It’s not the law."

She said her lifestyle has not been extravagant or reflective of someone on the take.

Wilkerson now spends her days shuttling between her two sons' houses - she said she doesn't feel safe staying in her own rental apartment - and playing with her grandchildren. She said she expects it could be a year or more before she’ll have her day in court.

Wilkerson has had financial troubles almost since she first took office in 1993. Her former Roxbury home was in danger of foreclosure several times, she was sued by a condo association twice for back dues, and she twice settled cases of multiple campaign finance violations with the attorney general.

She said the personal fundraising activity began in 1998, after she pleaded guilty to not filing tax returns for several years. Wilkerson said her tax debt at the time was more than $100,000, and she had no way to pay it herself, but she had friends and supporters who wanted to help.

While she said she did not want to discuss individual donors, she did describe one occasion when she accepted money from Ronald Wilburn, a Roxbury nightclub operator who later became the FBI's cooperating witness in the current case against her.

She said Wilburn handed her an envelope stuffed with $300 in cash during a Christmas party in 2001 at Estelle's nightclub in Roxbury, where Wilburn was a manager at the time.

Some public corruption specialists said that even if each individual contribution could be deemed legal - as Wilkerson asserted - the overall pattern and the failure to disclose them could constitute a crime.

"It is conceivable that this could be viewed as a scheme that could be ripe for investigation and prosecution," said Scott Harshbarger, former attorney general and member of a task force appointed by Governor Deval Patrick to study ethics reform.

The letter from the state Ethics Commission was one of two the commission sent to Wilkerson that advised her on the acceptance of money to pay personal bills.

The first, dated Oct. 1, 1997, offered the legal advice that she could accept the gifts. The second, dated March 13, 2003, reiterated the advice offered in the first.

At about the same time as she received the first letter, Wilkerson said, a tax lawyer, whom Wilkerson declined to identify, wrote a letter that said contributions under $10,000 could be considered gifts and, therefore, did not have to be reported in either the donor's or the recipient’s tax returns.

"It was all approved by lawyers," she said.

Wilkerson soon began collecting personal contributions, and it's unclear when or if she ever stopped.

Law details allowable gifts
Federal tax law allows gifts to individuals of up to $12,000 - a higher, new limit - each year without donors or recipients reporting them on tax returns.

"You don't have to pay income tax on them or declare them," said William Greenberg, a Canton tax lawyer.

Greenberg said it wouldn't matter if a recipient collected seven or more such gifts. "That's OK, too, as long as they’re from seven different people."

Wilkerson's acceptance of donations for personal bills also would not violate campaign finance laws, unless the money was also used to help fund her political campaigns, according to the state Office of Campaign and Political Finance.

"If people are giving a candidate money to pay off personal expenses, it's not a violation of campaign finance law," office spokesman Jason Tait said.

Wilkerson also would not describe in detail how she used the proceeds, but said that in general they went to pay taxes.

Wilkerson said she ended up paying the IRS only $70,000 because the agency accepted a settlement offer in 2003, thanks in part to help from US Representative Michael E. Capuano. She said he helped persuade the IRS to act on the offer, which had been pending since 1997.

Capuano declined to be interviewed for this story. Alison Mills, His spokeswoman, declined to say whether Wilkerson had asked for help and would say only that "Congressman Capuano never intervened with the IRS to negotiate a settlement agreement for Dianne Wilkerson."

Wilkerson said she first learned that federal authorities might be investigating her in October 2005, when the State Ethics Commission notified her that the US Department of Justice had requested copies of commission documents in her file.

Wilkerson said she immediately called a friend who, after checking with law enforcement sources, told her the request was just part of a "general sweep of the State House."

But several months later, she began receiving calls from clergy who said they had heard she was the subject of a federal bribery and extortion investigation. At a meeting with the Black Ministerial Alliance in March 2006, Wilkerson said, the alliance's executive director at the time, Harold Sparrow, acknowledged that he had told the other clergy about the investigation, but he refused to say how he knew about it. She soon wrote it off as a hostile rumor circulated by black clergy upset by her support of gay marriage.

"It was the most bizarre encounter I've ever had," she said. "I left that day thinking it was something that was made up, so I go about my business."