When snow-covered sidewalks force pedestrians onto the roads, the consequences can be deadly 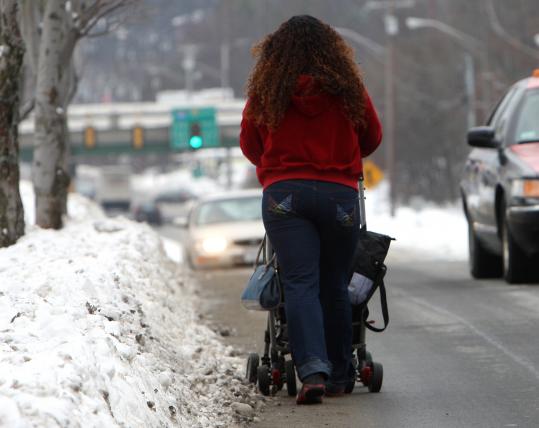 From the way sidewalks are plowed, it may seem that local governments assume the only people who walk outdoors in the winter are children on their way to school.

But Oleg Kotlyarevskiy, 47, wasn't going to school on Dec. 23. It was 6:39 a.m., just starting to get light, when he was hit by a traveling north on Main Street in Acton. He got off the commuter rail train 14 minutes earlier and was probably walking in the road because, as police Lieutenant Robert Parisi said, the sidewalk was on the other side of the street behind a large snowbank. He was on his way to work, but he never got there. He was pronounced dead at the hospital that morning.

Bruce Stamski, director of public works in Acton, would not say whether the sidewalk on Main Street had been plowed. He said the town's first priority as far as snow on sidewalks is concerned has to do with schools - not commuter rail stations.

"We try to work from the schools out so we have walking routes for kids," he said. "Minor streets and internal subdivisions we don't plow at all."

Deborah Hoare, 39, was also not going to school on Dec. 16, 2007, when she was walking home in Lawrence from her job at Burger King. A vehicle struck her, and she died. Joe Lynch, public works director in Shirley, who knew Hoare and lives nearby, said she was walking in the street because the sidewalk had not been plowed.

That sidewalk on Route 114 - not far from where she was killed - is covered with snow again this winter.

On a recent Tuesday afternoon, Yajaira Rivera was walking on the side of the road there, pushing her year-old daughter in a baby carriage. Rivera said she felt bad about having to walk in the road, but had no choice because she does not own a car and does not always have the money for bus fare. She says she typically walks on Route 114 for a half- hour about three times a week.

Rivera might not know that a 50-year-old bank teller from Blackstone lost her life last winter when she was walking on the side of the road near her house where the sidewalk was unplowed, and a Billerica woman - who was eight months pregnant - was severely injured because the street she walked on had no sidewalks.

While Department of Public Works officials acknowledge that unplowed sidewalks lead pedestrians into roads, they accept the fact that only a small proportion of pedestrian walkways will be passable after snowstorms.

In Lowell, T.J. McCarthy, the assistant city manager for public works, said only 20 percent of sidewalks are cleaned. He said he noticed a lot of people walking in roads and received calls from residents who had close calls with vehicles. But, as in Acton, the city's main priority is making it safe for children to go to school, he said. The city uses Geographic Information System maps to identify the largest school bus stops to determine where sidewalks need to be plowed.

"I don't think the city has resources to shovel every single sidewalk," McCarthy said.

In Tewksbury, the superintendent of public works, Brian Gilbert, said the town plows less than half of sidewalks, focusing on those around schools. The town does not put sand or salt on sidewalks. DPW employees are not allowed to work overtime to plow pedestrian ways nor do they even begin sidewalk operations until after all the roads and parking lots have been dealt with, he said.

"One storm can go into another and we haven't even touched the sidewalks yet," he admitted.

The chairman of the Tewksbury Sidewalk Committee, Franco Lucchesi, said residents are constantly voting down proposals to improve pedestrian walkways.

"There are quite a few people in town who feel that if we want sidewalks, we should go back to the city," he said.

In Plymouth, where an 80-year-old woman who was taking her morning walk lost her life in January of 2000, her neighbor Alan Rogers, said the impassible sidewalk was to blame.

The town began plowing the sidewalk for a couple of years after Iria Albertini was killed, but no longer does so, Rogers said. This winter, people are once again walking in the road, and it's another accident waiting to happen, he said.

"We have housing for the elderly on the street and they often don't own cars and they often have to walk to 7-11," he said. "Even today, the same place where she was killed people still don't clean sidewalks."

But in Medford, City Councilor Michael Marks is fighting back against the indifference.

Marks introduced a resolution this month asking the city to enforce the ordinance that fines residents for not shoveling sidewalks in front of their houses. He even wants to use the reverse 911 system to tell homeowners to start shoveling.

Ed Novi, 77, who lives on Main Street, walks when he needs to go anywhere and he says he doesn't feel safe in the middle of the street maneuvering around parked cars and hoping not to get hit by the rush-hour traffic.

"I'm afraid to walk in the street because there are buses and people going to work," he said.

Julie Masis can be reached at greenelephant888@hotmail.com.