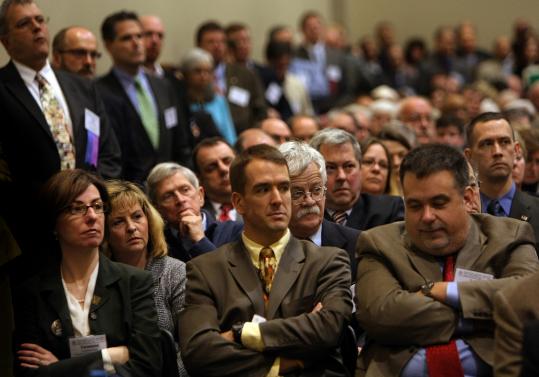 Brace yourself: Cities and towns across the state expect to lay off thousands of employees. The impact will be widespread and highly visible - shorter hours and longer waits at town halls, larger class sizes, more potholes.

Nearly every community is "going to see blood," said Mayor John Barrett III of North Adams, who expects to "limp through" June but anticipates having to close one or more schools and lay off a significant number of city workers after that.

The massive cutbacks come as state and local governments respond to the rapidly worsening economy.

Last Friday, Governor Deval Patrick announced that he was cutting local aid to cities and towns by $128 million for the current fiscal year, and he proposed an additional $375 million cut for the fiscal year that begins July 1. The cuts are part of Patrick's larger plan to close the widening state budget gap and craft a balanced budget for next year.

Roughly $1 of every $5 spent by Massachusetts state government goes to cities and towns to help their local budgets, paying for everything from classroom teachers to trash collection. Recognizing the importance of that aid, Patrick said he plans to cut more steeply from other sections of the state budget.

But local spending will still take a beating. With construction and renovation projects grinding to a halt, auto sales tanking, and tourism and business travel in a slump, the money communities generate on their own - from excise and hotel taxes, building permits, and tax on new property - is being hit hard.

"The picture was not rosy," said Roy E. Belson, Medford's school superintendent, and one of hundreds of officials who listened to a stark keynote panel at a conference last week of state school administrators entitled "Preparing for Tough Fiscal Times." Afterward, nearly every school superintendent raised a hand when asked if they expected to lay off teachers. "If you weren't depressed going in, you'd be depressed going out."

Recent history shows what could be in store.

About 14,500 teachers, firefighters, librarians, and other local employees lost their jobs as a result of the state's last economic downturn and a cycle of cuts imposed by then-governor Mitt Romney that reduced local aid by more than $500 million between 2002 and 2004.

In the ensuing recovery, lawmakers reinstated some but not all of the aid, and many cities and towns were unable to fully restore staffing and service levels. They were also constrained by government costs, such as health insurance and utilities, that rose faster than inflation and faster than they could raise money under Proposition 2 1/2, which caps the additional property tax revenue a community can raise yearly at 2.5 percent, not counting taxes raised from new real estate development.

"This is not a pleasant time to be a municipal leader," said Revere Mayor Thomas G. Ambrosino, in office for a decade.

Some cities and towns will make dramatic, immediate cuts to balance budgets for the current fiscal year, which ends June 30, several local officials said. Other communities will be able to endure this year by spending reserve funds, or by not filling vacancies, before taking much larger action for the new fiscal year starting July 1.

Even Nantucket, with its surfeit of tax-generating summer homes, is worried.

"We have not had the layoff discussion in as serious a manner as we’re having it now, in my tenure," said C. Elizabeth Gibson, Nantucket town manager since 1995. "It's looming right now."

"Factors beyond our control are hurting us all," said Boston Mayor Thomas M. Menino. "From North Adams to Plymouth, Lowell to Chicopee, the numbers surely aren't pretty." Menino made his remarks in an address to hundreds of mayors, selectmen, and administrators Friday at the annual conference of the Massachusetts Municipal Association, the statewide organization of town and city officials.

Aside from the impact on local services, layoffs will take a severe toll on employees, their families, and local economies.

"Whether you like it or not, and whether you think government spends too much, that's an awful lot of money taken out of the economy, and that has a spin-off in every local community," said Chicopee Mayor Michael D. Bissonnette.

Revere, like many communities, already has imposed a hiring freeze as employees leave through retirement or other departures. The city also cut overtime, so public-works tasks like tree removal and pothole repair take longer to be addressed, Revere's mayor said.

"We were trying to squirrel away money for this midyear cut," Ambrosino said. But that won't offset the more than $1.2 million lost this year from local aid. The mayor said the mix of layoffs and other measures could include the possible closure of City Hall on Fridays.

After avoiding layoffs for several years, Medford last summer eliminated nearly 50 school positions, about half of them teachers. Mayor Michael J. McGlynn initially prepared for more education layoffs and proposed public-safety reductions, but avoided them through one-shot measures, like soliciting private donations and redirecting some money associated with the sale of a school building.

Now, bracing for an immediate local aid cut of more than $1 million, and a larger cut next year, McGlynn anticipates multiple rounds of layoffs. "We just don't have 2 million bucks that's sitting around," he said.

McGlynn said laying off the newest employees, according to union contracts, will hurt young families and new homeowners, potentially exacerbating mortgage problems that contributed to the recession.

Still, local officials said they consider Patrick an ally. They overwhelmingly favor the governor's new proposals to allow them to raise money through means other than the property tax, and to rein in fast-growing fixed costs.

Those proposals, which stalled in the Legislature last session, including additional room and meals taxes and curbing health insurance costs.

The measures - coupled with potential aid from a federal economic stimulus package - are unlikely to be enacted in time to avoid the immediate cuts.

In Franklin, staffing is already about 85 percent of what it was six years ago, which means fewer police officers and a library open six days a week instead of seven.

Recently, the town stopped salting side roads during winter storms, preserving salt for the busiest thoroughfares.

That choice was easy compared with what lies ahead, said Jeffrey D. Nutting, Franklin's town administrator and the new president of the Massachusetts Municipal Association.

"We're going to have all kinds of decisions that were never even talked about or thought about," he said.