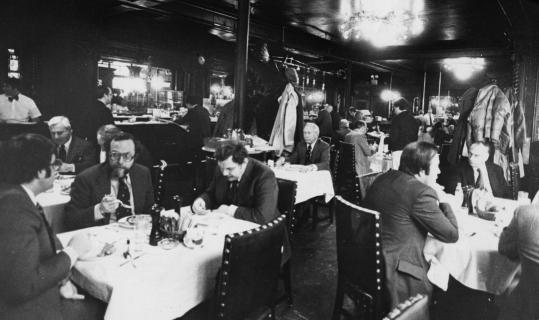 In the heyday of the business lunch, men - and let's be honest, they were all men - left their offices, newspapers in hand, bound for a dark, crowded dining room, where the lobster stew was rich and the customers often were richer: Locke-Ober.

The downtown restaurant, founded in 1875, owned noontime. Lawyers and judges, cardinals and senators, filled the main dining room, lounging at the hand-carved mahogany bar and eating thick-cut steaks off fine china emblazoned with crests. To be there - sipping martinis in the required jacket and tie - was to be someone. And the décor, preserved to this day, reflected that. The ceilings are high and the lights dim.

This was lunch, the way it was supposed to be eaten by a proper Bostonian, or those striving to become one. But now it is over - at least for a while.

Locke-Ober is closed for lunch.

"It was a very difficult thing for us, not having lunch at Locke-Ober," said Paul Licari, who along with co-owner Lydia Shire decided to suspend the midday meal. "We're committed to running Locke-Ober the way everyone remembers it."

The problem is, times have changed. The same economic woes that have hit other Boston institutions began hurting Locke-Ober last year, Licari and Shire said. Worried about more economic troubles in 2009, and about a decline in private party bookings, the ownership duo decided it was best to be prudent and scale back.

The restaurant is still open for dinner. But the last lunch was served on Dec. 31. A small sign advertising "Recession Hours" was posted in a window. The restaurant's lunch era had been suspended indefinitely, and with it, an era in the city.

Maybe, Shire said, they'll begin serving lunch again next month at the bar only. Or maybe, she said, they'll relaunch in the spring. Or if not then, definitely by the fall, when the restaurant's business historically picks up.

"There's absolutely no question that lunch will open again at Locke-Ober," Shire said. "The timing, I can't tell you. I'm not certain of the time. But it will."

Just reopening, however, will not solve all of the restaurant's problems. There is more at play than a recession. Even if the economy rebounds, the fact remains: Lunch - a time once set aside for back-slapping, cigar-smoking, and savoring a fine-cooked meal - is not what it used to be in Boston.

"I've got - what? - 60 or 70 partners here. And they go out, get sandwiches, and eat at their desks," said Tom Burns, the 87-year-old founding partner of the downtown law firm Burns & Levinson, who used to eat at Locke-Ober once a week. "People just don't have any feel anymore for genteel living and dining. It's a thing of the past."

Locke-Ober may not be the oldest restaurant in Boston, but it is steeped in Yankee tradition, predating the gas-powered automobile, the radio, and the Red Sox. For generations, Boston Brahmins, power brokers, deal makers, and scene makers have been dining here on oysters, calf's liver, and the famous Indian pudding, made with molasses and cornmeal and served warm with a dollop of vanilla ice cream.

Nearly everyone who's anyone has been here: Oscar winners (Paul Newman), presidents (John F. Kennedy), comedians (Jack Benny), icons (Joe DiMaggio and Marilyn Monroe), and, finally, women, who weren't allowed in the downstairs dining room until 1970. But more important than the famous were the regulars.

"Lunch was an important event in the lives of lawyers and finance people and insurance folks," said Robert Muldoon Jr., a lawyer who has worked downtown since 1966. "The idea of having a sandwich at your desk, or sent in, was just not the practice. People would go to lunch and take an hour or an hour and a quarter. Lunch was just taken for granted as part of the day."

But well before Licari and Shire took over in 2001, leasing the building and name from longtime owner David Ray, Boston's lunching tradition had begun to change. One factor, said Ray, owner since 1978, was the restaurant's location, nestled down an alley off a narrow side street in the heart of Downtown Crossing.

"For years, lunch at Locke's was a very important part of the downtown business community," Ray said. "But over the years the area has deteriorated to such an extent that it's difficult to get people to walk down there."

But the shrinking lunch crowd is also tied to a more subtle cultural shift . Bigwigs who once set aside time - and money - for lunch started doing so less often. Expense accounts disappeared. Companies that had once tolerated, or even encouraged, drinking on the clock decided that sobriety was a better way to go.

"It was a lot of fun while it lasted," said Nate Withington, a senior vice president at Smith Barney and a former part owner of Locke-Ober. But "unfortunately," he added, "the three-martini lunch has gone the way of the straw hat and spats. It's no longer."

And so, while Locke-Ober lovers were shocked by the news that the restaurant has suspended lunch, many were not surprised. In fact, some conceded, they are part of Locke-Ober's problem.

Ed Masterman, a Boston lawyer who has been eating at Locke-Ober since 1943, used to dine there once a week, never able to get enough of the clam chowder. But he's 83 now, lives in Palm Beach, Fla., half the year, and admits to often lunching at his office when he does work in Boston.

Reached at work this week, lawyer Bob Crowe, another longtime Locke-Ober customer, admitted to having just finished a salad at his desk. If he's going to do business over a meal now, he said, it's more likely to be breakfast. And even Withington, who says he'd like to die at Locke-Ober "with a martini on the table," admits that he's not as faithful a patron as he once was.

He curses the "sandwich and a Coke" crowd. But in the next moment, Withington sheepishly admits he's one of them, usually dispatching his sales assistant to grab him a sandwich at one of the many chain restaurants near his 40th-floor office.

"Usually, I tell him to surprise me," he said. "And to be honest, I haven't been surprised yet."

In fact, he said, on most days he can't even remember what he ate. And perhaps that's why people keep coming back to Locke-Ober. You can linger over lunch. Or, at least, you could.

One afternoon this week, Bill Adams, a retired bond salesman, went to the restaurant for lunch, unaware of its new hours. He pulled on the door. But it was locked. Through the window, an employee broke the news about lunch, and Adams, disappointed but still hungry, wandered off to dine at the nearby Parker House.

The meal was fine, he said. But it wasn't Locke-Ober.