Suspect once lived where attacks began 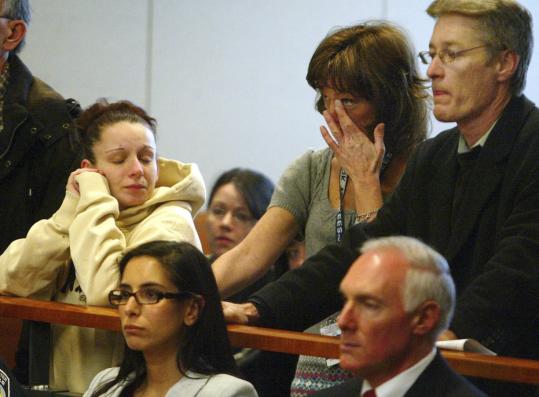 This story was reported by John Ellement, Brian Ballou, Jonathan Saltzman, and Andrew Ryan of the Globe staff. It was written by Ellement.

BROCKTON -- Maria DeSilveira stood on the front porch of a relative's home yesterday clutching a framed photograph of her handsome father as tears rolled down her face.

"My dad didn't deserve this,'' she said of Arlindo DePina Goncalves, 72. "There's too much racism in this world.''

Police said Goncalves was the third and final victim of Keith Luke, a 22-year-old Brockton man who authorities said devised an "evil plan'' fueled by racism to kill as many "nonwhites'' and Jews as he could before taking his own life.

Luke, authorities alleged yesterday, killed Goncalves and a 20-year-old woman, raped and shot the woman's 22-year-old sister, but failed in his plans to attack a Jewish synagogue and end his life.

Luke stood in Brockton District Court, hands manacled behind his back, his face scratched and bruised, the outcome of a gun battle, police chase, and car crash.

Luke pleaded not guilty to two counts of first-degree murder, one count of aggravated rape, and two counts of armed assault with intent to kill. He was ordered held without bail by Judge James Sullivan.

Sitting in court with tears in his eyes was the father of the two sisters he had brought from their native Cape Verde about a year ago for a better life here.

According to authorities, Luke, for reasons that are unclear, targeted the sisters and attacked them Wednesday afternoon in the Clinton Street apartment building where Luke and his mother had once lived. Relatives of the women said they did not know Luke and believed that the sisters did not know him, either.

One 20-year-old woman was shot and killed and her older sister was repeatedly raped and shot, but survived. She was listed in stable but serious condition at a Boston hospital yesterday.

The Globe is not naming the sisters because its policy is not to identify victims of sex crimes without their permission.

In court, First Assistant District Attorney Frank Middleton described Luke's alleged rampage and how two men -- one white, the other described as a person of color -- braved gunfire to try to help the mortally wounded woman.

"Yesterday this defendant methodically began an evil plan of mass murder and rape in the City of Brockton targeting victims he identified as nonwhite,'' said Middleton. Luke wanted to "kill as many Jews, blacks, and Hispanics as humanly possible ... before killing himself,'' he said.

Defense lawyer Joseph Krowski Jr. asked that his client be sent to Bridgewater State Hospital, a request rejected by the judge. Krowski suggested Luke had a history of mental illness but did not elaborate.

Luke allegedly forced his way inside the sisters' apartment with a 9mm handgun and a backpack containing two pairs of handcuffs, a blindfold, and a gag he had bought with his mother's credit card. He used the handcuffs to bind the elder sister's hands and then repeatedly raped her. When her sister came to the door and banged on it, Luke shot her multiple times, police said.

After shooting the woman at the door, Luke looked to her sister in a bedroom covering herself with a white teddy bear. He shot her through the stuffed animal, according to the police report.

Out on the street, as two men tried to help the younger sister, who had retreated from the door, Luke fired at the nonwhite would-be rescuer, but missed and then drove off, police said.

A few blocks away, Luke happened upon Arlindo Goncalves, whom he knew from the neighborhood, police said. Luke stepped out of his van and fired, police said.

"Goncalves raised one hand in front of his face to protect himself,'' police wrote. They said Luke shot him again in the back to make sure he was dead. A passerby who had followed Luke provided police with his license plate number.

Luke reportedly fired on and missed two Brockton police officers as they pursued the van until it plowed into two vehicles and crashed near East Ashland and North Quincy streets.

Police said Luke told them he bought a handgun on the street six months ago and purchased 200 rounds of ammunition.

"I'm sorry I shot at the cops,'' he said, according to a police report. "But I am not sorry I shot those people at the house.''

After he shot as many "nonwhites'' as he could, he reportedly told the police his plan was to head to a synagogue near his mother's Pleasant Street home and kill as many Jews as he could as they left a bingo game. He would then kill himself.

Rabbi Joshua Cohen of Temple Beth Emunah, the Conservative synagogue Luke planned to attack, said he had never heard of Luke and believes he randomly targeted the synagogue. He said investigators told him Luke was acting alone.

"As much as we like to think we've moved forward in our society and culture, hate and racism still exist, and it's really unfortunate,'' Cohen said.

About a year ago, Luke and his mother, Dara Paparo Luke, moved back to Pleasant Street, where she had grown up. Neighbors said the extended Paparo family had lived in the racially mixed neighborhood more than 25 years, and that Keith Luke was close to his mother and grandparents.

Richard W. Sullivan and his wife, Beth, said they watched Keith Luke grow up and were surprised to hear of the charges. They never saw signs of racial hatred in him, they said.

"It's very disturbing,'' he said. "We're a very diverse community. Like any community, every so often you will have somebody that will commit a crime of hate, but it's generally not something you ever see in Brockton, and it's certainly not something we tolerate.''

Arlindo Goncalves's sister, Amalia Goncalves, 37, speaking Cape Verdean Crioulo, said her brother was "an old man who lived out on the street, didn't hurt anyone.''

Arlindo Goncalves worked as a bricklayer in Cape Verde and arrived in the United States about 18 years ago, his sister said.

A father of eight, he sometimes lived with three adult children who are in the United States but ultimately insisted on his independence.

"He had been talking about going back to Cape Verde, because he would have a better life there with his [five] children and the rest of his family,'' Amalia Goncalves said.

The two sisters had worked for about a year in the Brockton production plant of Zoots, a chain of dry cleaning stores, said Patricia O'Leary, co-owner of 17 stores. O'Leary said co-workers were close to them and were weeping in the plant yesterday.

"They all spoke about these two girls and how friendly they were and how funny they were,'' O'Leary said. "They were very well liked. It's just awful.''

A close friend said the woman who was killed was a "poderosa meiga,'' a person with a magnetic personality respected by her peers.

"She acted the mother to all of us,'' said the friend, Lori, who asked that her last name not be published because of the ongoing criminal investigation. "She was very strong, a very strong girl. She was always smiling and she was brilliant.''