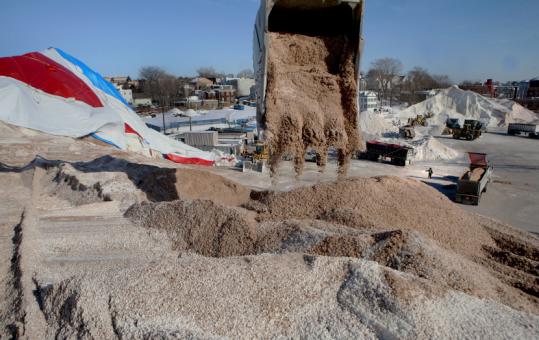 A combination of near-record snowfall and freezing temperatures is straining the ability of road salt suppliers to meet demand from Massachusetts communities struggling to keep ice off their roads.

Across the state, public works managers say they are using much more salt this year than last and burning through their snow removal budgets quickly. The commodity sells for about $70 a ton, enough to de-ice 10 miles of highway.

"Our salt sheds are quite depleted, and we're having trouble restocking," said Edward Buckley, highway manager for Plymouth's 400 miles of roads. "The last time we tallied things up, a week after the New Year's Eve storm, we [had used] 5,000 tons of salt. Last winter, we used about 8,000 tons for the whole winter."

The situation is similar for Bob O'Connor, Weymouth's public works director, who has used about 25 percent more salt so far this winter than at this time last winter.

"You just have to deal with what Mother Nature gives you - ice on top of snow and flash freeze - and that means sanding and salting roads," O'Connor said. "Thus far, we're keeping up with what we have to do, but just barely. We could use a break, the men, the equipment, and the budget."

In Hingham, police sent an e-mail to residents this week warning that snow and ice removal would focus on major roads, not secondary streets or public parking lots, because of a short supply of salt. "We need some sun and some 70 degree weather for about a week," said Highway Supervisor Harry Sylvester.

No such luck: The forecast calls for more snow and frigid temperatures today and possibly more snow this weekend, according to weather forecasters.

Robert Skilling of the Blue Hills Meteorological Observatory in Milton said he recorded 38 inches of snow since December, more than double the normal amount. This month's temperatures are running 3 to 4 degrees colder than normal, "with no real thaws at all," he said. In addition, areas north and west of Boston were hit with major ice storms.

That translates to a high demand for salt.

"We're pretty much running at capacity right now," said Joe McNamee, general manager of Eastern Minerals in Chelsea, one of the region's largest salt suppliers. "We've been open as much as possible to meet the demand, 6 a.m. to midnight. We even opened on New Years Day. It's been kind of real salt weather."

McNamee said salt is available, though it's a matter of getting to everyone who needs it at the same time. "It's been the frequency of the storms that gets the cities and towns low and the demand high," he said. "We're definitely feeling the pinch from our customers that they want more as soon as they can, and we're doing the best we can to accommodate them."

The company recently merged with Eastern Salt of Chelsea and provides road salt to about 150 Massachusetts communities, McNamee said.

Since the 1950s, the company has been importing salt by ships from Chile, Mexico, Australia, and Northern Ireland. The Genco Explorer, loaded with 50,000 tons of salt from Northern Ireland, docked yesterday in Chelsea. McNamee said Eastern Minerals has room to stockpile about 200,000 tons and already has gone through that amount, plus another 100,000 tons.

Not all communities report problems keeping up with salt demand.

Dover's superintendent of streets, Craig Hughes, said he has had no difficulty getting salt. But he tries to keep down the quantity, anyway. "We don't have a public water supply - the whole town is on wells - so we really have to watch how much salt we use," he said.

The city of Lynn has room to stockpile a large amount of salt, said Public Works Commissioner Jay Fink, and is getting enough new deliveries to "handle three or four storms until we hit the barn's back wall."