Driver: 'We're not stopping!'; 44 firetrucks to be inspected 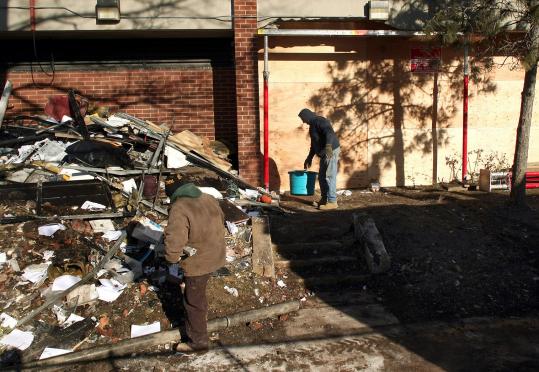 Investigators are zeroing in on catastrophic brake failure as the cause of Friday's fatal firetruck crash based on reports from survivors who said the driver was conscious and frantically pumping the brakes to no avail as the massive ladder truck hurtled down a steep hill, through an intersection, and into a high-rise apartment building.

Accounts from two surviving firefighters, who were not identified by name, painted the chaotic seconds as Ladder 26 careered down Parker Hill Avenue at breakneck speed, its emergency horn blaring, according to a ranking public official who spoke on the condition of anonymity because of the investigation.

Fire Lieutenant Kevin M. Kelley, in the front passenger seat, was killed instantly. The driver, firefighter Robert Bernard O'Neill, was kept overnight at Brigham & Women's Hospital, but was released yesterday. The two other firefighters, who gave preliminary reports to investigators, were riding in the back seat and suffered minor injuries.

Boston Fire Commissioner Roderick Fraser last night commissioned an outside inspection of the brake systems on the 44 firetrucks from the same manufacturer in the city fleet. He characterized it as a precautionary measure, saying officials have not found anything systemically suspect that could have contributed to brake failure. Fraser emphasized that brake failure is a preliminary theory, based on the lack of skid marks near the crash scene on Huntington Avenue in Mission Hill and the dry road conditions.

"People just make that logical assumption," he said. "I think that the common sense assumption is they had no braking ability or they wouldn't have barreled down a hill and into a wall."

Maintenance records show that the truck in Friday's accident has had brake problems in the past. In 2006, the 110-foot ladder truck crashed into another building, but no one was hurt in that incident. Last October, a routine inspection found a faulty brake hose, which was replaced by a North Attleborough repair shop.

The truck has been impounded by police and will undergo a stem-to-stern examination as part of the investigation.

Boston police and Suffolk County prosecutors are conducting the primary probe of the crash, seeking to rule out any criminal activity that could have contributed to the tragedy.

"Our investigation will be thorough, and the loss our city suffered Friday will remain foremost in our minds," Suffolk District Attorney Daniel F. Conley said in a statement yesterday. "Our thoughts and prayers are with Lieutenant Kelley's family, his loved ones, and his department."

Fraser said an additional investigation will be conducted by a Fire Department board of inquiry, a panel of six to nine firefighters with different areas of expertise. They will begin their work tomorrow, he said.

The ladder truck was returning from a routine medical call at about 2:30 p.m. Friday when O'Neill apparently lost control of the vehicle going down Parker Hill Avenue - one of the steepest streets in the city. The narrow 3/4-mile-long street makes a sharp turn and then drops steeply for 800 feet as it leads into Huntington Avenue.

Video footage from security cameras posted on apartment buildings along Parker Hill Avenue revealed that the truck could have slowed down by deliberately crashing into parked vehicles, but doing so could have caused the cars or the truck to ram into a pedestrian walking down Parker Hill Avenue, according to a law enforcement source who saw the footage and spoke on the condition of anonymity because of the ongoing investigation. The truck kept hurtling forward through a green light at Huntington Avenue and then blasted through the front gate of a Mission Hill apartment complex, coming to rest in a computer lab on the first floor of the high-rise.

Yesterday, family members made arrangements to bury Kelley, a married father of three grown daughters and a 30-year veteran firefighter. A wake will be held Tuesday from 4 to 8 p.m. in Keohane Funeral Home in Quincy. The funeral Mass will be said Wednesday at 10 a.m. in Saint Ann Church, also in Quincy.

A woman who answered the phone at Kelley's Quincy home yesterday evening declined to be interviewed. "No, we're not ready yet," she said.

Edward Kelly, firefighter union president, said yesterday that truck maintenance has been an ongoing problem. But he said his primary concerns are elsewhere now.

"Right now we want to focus on Lieutenant Kelley and his family and give him the dignified and honorable funeral that he deserves," the union president said. "The accident deserves a very thorough investigation, and the factors that caused this accident deserve to be addressed and will be in due time."

Shoddy fire equipment maintenance has been a constant complaint by firefighter union officials for several years and became a bone of contention during contract negotiations with the city in 2007. Fraser, who took over the department in late 2006, conducted a department-wide survey of firetrucks and other equipment and called the condition of the trucks "deplorable" at the time.

He has since purchased five new ladder trucks and ordered another two, record show.

At a news conference yesterday, Fraser stood behind the department's record on equipment maintenance.

"There's been some misinformation I think out there that we're not fixing stuff due to budget," Fraser said, explaining that he has nearly doubled the department's maintenance budget since arriving in 2006.

"If something needs to be fixed on a frontline piece of apparatus, it's done and fixed," Fraser said. The existing trucks are inspected and certified annually by outside repair shops.

The truck involved in the accident, a 1995 ladder truck manufactured by Florida-based E-ONE, passed an inspection last fall conducted by Greenwood Emergency Vehicles in North Attleborough, the state's E-ONE dealer. Before passing the truck, Greenwood performed roughly $21,500 worth of repairs on the vehicle. The work included repairs to a faulty brake hose.

Other smaller-scale repairs since then have been done by Fire Department mechanics, including on Jan. 3, when a dashboard switch was found burnt out and smoking. Department mechanics replaced the switch, which controlled a heater and is unrelated to brakes, maintenance records show.

The records mistakenly include a rear-end collision in December that actually involved another truck, Fraser said.

Yesterday, at the firehouse where Ladder 26 is headquartered, on Huntington Avenue a few blocks east of the crash site, people left memorials to Kelley. Inside, an aspiring firefighter from Medford who became a fan of Kelley and the firehouse while watching the Discovery Channel's "Firehouse USA" series left flowers with a note and a photo.

"You will always remain in my heart each and every day when I am doing my job," read a note, left on a piece of board signed by Austin Rodrigues and his family. "You are a true hero! May you rest in peace."

More than a dozen bouquets and assorted memorials to Kelley, including a wooden cross rising from a pair of firefighting boots, had been set up near the entrance to the firehouse. They rested beneath bronze memorials honoring three previous firefighters from that firehouse who died while responding to calls.

Eric Moskowitz and Maria Cramer of the Globe staff and Globe correspondent Adam Sell contributed to this report. Donovan Slack can be reached at dslack@globe.com.