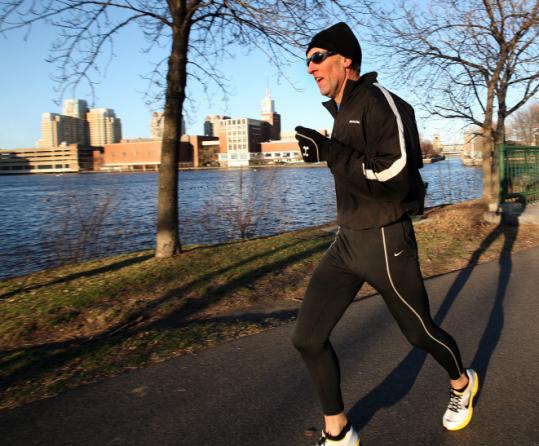 At 6 a.m. every New Year's Day, Gary Allen toes a faded starting line in Hopkinton in deserted darkness, the hallowed Boston Marathon course silently stretching before him and him alone. With a beep of his watch he is off, the first runner in the new year to embark on the long road to Boston, leaving a new mark on the world's oldest annual marathon.

The wiry 51-year-old from Maine covers miles without encountering a soul. In Framingham, dawn breaks, but the world remains fast asleep. In Wellesley, site of a deafening din on race day, the only sound is the draw of his breath and the fall of his feet. In Newton, he and Heartbreak Hill wage a lonely battle, with no cheers to push him over the rise.

If all goes well this morning, Allen will complete his fifth New Year's journey in Copley Square, crossing a snow-washed finish line unnoticed. Then, as usual, he will smile wearily for an arm-length photograph of himself in the middle of a carless street.

"All is quiet on New Year's Day," Allen quipped, referencing lyrics to a U2 song.

Allen's annual 26.2-mile trek is both a personal tribute to the acclaimed race and a heartfelt ritual of reflection and renewed resolve. While Patriots Day brings some 25,000 runners along the marathon route, Allen runs alone, thoughts of the year past and the one ahead his only companions.

"It's a perfectly clean slate," he said in an interview this week after an afternoon run. "There is no more historical stretch of road in running than the Boston Marathon, and I can't think of a better way to start a new year. It's a magical experience."

Allen, an accomplished marathoner who has broken the three-hour mark 53 times, said he rarely sees another runner before he reaches Newton and assumes he is the first runner each year to traverse the entire course. That is a humbling, nearly mystical, concept, he said, a perfect match of time and place.

"For runners, the course is bigger than any of us," said Allen, a jack-of-all-trades who counts landscaping, farming, carpentry, boat-building, and lobstering among his professions. "I'm just a grain of sand on the beach. But during the run, when it's pitch dark and perfectly still, you can feel the energy. There have been so many dreams realized - and broken - along the road."

Allen, a lifelong resident of Great Cranberry Island, Maine, began the tradition four years ago while staying in Boston with family. He wanted to get in a long run to prepare for the actual Boston race in April, which he has run 16 times, and decided he might as well run the course.

Runners take to the Boston course throughout the year, of course, particularly on weekend mornings leading up to the April race. Visitors make a point of blending the infamous Newton hills into their training, to witness the legends themselves.

While New Year's Day, with resolutions fresh in the mind, is a popular day for a run, even the most dedicated runners might sleep in a bit, and save the full marathon distance for their next race.

In stark contrast to race day, when Hopkinton crackles with energy, the starting line is a desolate, often bitterly cold, scene on New Year's Day. Allen, a slender 6-foot-1-inch, 160-pound runner who has logged more than 100,000 miles without serious injury, says he gently stretches before beginning at precisely 6 a.m.

"You just launch yourself down that hill," Allen said of the start.

Except for the weather, early New Year's Day provides a serene setting, he said. The mile markers are visible, and he puts a few waters along the route beforehand. He runs in the road the entire way, even running tangents to reduce distance, and has never had to stop at a light.

"It's the only other day, besides race day, when there are basically no cars on the course," said Allen, who says he has run the course on New Year's in as little as three hours, 10 minutes.

Allen, who started running when he was 13 and now directs the Mount Desert Island Marathon, heads to bed before midnight on New Year's Eve to rest up for the run, but celebrates First Night festivities with his wife and 6-year-old daughter and has a nice dinner out.

Allen said the tradition invariably produces transcendent moments, and he has come to savor it more than the actual race. He finds his New Year's run purer, a more authentic celebration of running and one of its most sacred venues, and more personally inspiring.

"Given the choice, I'd take the New Year's," he said. "It always lives up to all my expectations, and more."

There is no finisher's medal or space blanket, no hoopla. Just the burn in his legs, the bite of the air, and the slow, triumphant walk to his family's house.