The hunt for an assault suspect whom police feared was trying to commit "suicide by cop" ended peacefully today when Hosea Richardson surrendered in front of the Christian Science Reflecting Pool after a lengthy discussion with crisis negotiators. He had been on the run for more than 24 hours.

Richardson, 33, of Newton, allegedly beat a female friend at her West Roxbury home about 5 yesterday morning home after a night of dancing at a Randolph nightclub, police said. He then called his mother in Newton who drove to meet him in a Dedham mall parking lot. Police arrived, but Richardson eluded them, according to a police report.

Richardson has a history of mental illness and told his mother he wasn't afraid to be killed by police, his mother and a police spokesman said yesterday.

He called police this morning and said he was going to go to the Beth Israel Deaconness Hospital, where the alleged victim was being treated, and "get into a confrontation with police and the victim," said Boston police Superintendent Daniel Linskey, at a press conference about noon today at police headquarters.

"We responded to that hospital and worked with hospital security to ensure a safe facility," Linskey said. "Our crisis negotiation team began contacting the suspect and actually worked with local clergy to get him to turn himself in."

In the end, Linskey said Richardson chose to "think about the future as opposed to the past."

"[He was] very calm. He is tired, and I think he just wanted to get it over with and get some help," said Detective Sergeant Courtney Matthews, head of the Boston police crisis negotiation team.

Richardson was unarmed when he was taken into custody, police said.

From her home in Newton on Saturday, Richardson's mother, Camilla-Joy Richardson-Gates told a Globe reporter she was praying for her son's safety.

"There's no way I condone what he's done. I'm the first to tell him. But I'm his mother. A mother's love doesn't die," she said in an interview. "He's a young man that just has problems."

Richardson was taken to an area hospital for psychiatric evaluation. He faces domestic violence charges and will have to answer for several unrelated warrants, police said. 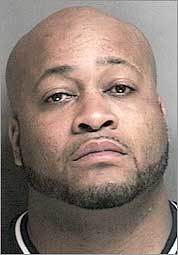