St. James parishioners are marking their fifth Christmas occupying the church since the archdiocese decided to close it, and neither side is willing to give up Chronology of standoff in Wellesley 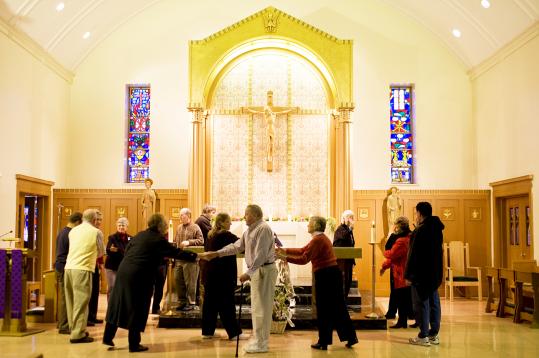 WELLESLEY - It is Sunday morning at St. James the Great in Wellesley and, like every Christmas season since the church opened its doors in 1958, the Advent candles are lighted, gifts are accumulating under the "giving tree," and the Communion wafers are prepared.

This weekly service - it can't officially be called a Mass without a priest - is bittersweet.

In the absence of an ordained leader, parishioners guide the worship service, administering Communion - the wafers have been blessed elsewhere - and reading from the Gospels and praying together. They never stop hoping a priest will again call St. James home and the church doors can open freely again. In the meantime, they live in limbo, keeping up their vigil in the building, doing their best as spiritual stand-ins.

"Our job is to open up paths along which Christ can travel," parishioner Nancye Connor said in a reflective talk from the lectern to about two dozen faithful at a recent weekly Sunday morning service. "The road to faith is full of rocks and deep potholes."

Fellowship at St. James is marked by deep love and commitment, as well as a feeling of painful alienation. The Archdiocese of Boston has been urging them to leave the building and give up the vigil since it began on Oct. 31, 2004, after the diocese put the parish on a list of churches scheduled to close.

At all times one of their members is in residence in the building, eating, working, and sleeping in a small office off the cavernous sanctuary.

The parishioners laugh at the idea that they are "rebellious" or "rogue" Catholics. Not at all, they said.

They just want St. James to be the way it used to be. For a half-century after the land was provided to the archdiocese by the family of James Maffei, there was a flourishing house of worship, always with a priest in residence to lead a flock numbering more than 600 Catholic families at its height in the 1980s.

"We are Catholics here at St. James, living lives of faith. We just don't have a priest," said Connor.

In May 2004, the archdiocese told the parish it would disband. Church officials declared that dwindling attendance and financial pressures required the closing of 65 parishes in the Boston area, and St. James was on the list.

Members of the Wellesley parish, along with 10 others in Greater Boston, went into vigil in the months that followed rather than allow their church doors to close.

St. James also pushed forward a series of legal and canonical appeals designed to block the archdiocese from claiming the valuable 8-acre parcel along Route 9 that houses the church and rectory. The last hope, an appeal to the Vatican's Apostolic Signatura legal tribunal, is pending, with no result expected before spring.

Over and over, those who occupy St. James are asked why they will not just accept their fate gracefully.

"People who ask 'Why can't you move on?' don't really understand why we are here," said a parish leader, John Fortini, who was baptized at St. James and has been a lifelong member. "We don't want anything special. We just want to be a parish like we had been for 50 years."

Fighting for the church is about justice, he said. "We've started something and there is a need to finish it. I can't imagine life without it. We're going to see it to the end."

The four-year vigil at St. James - and at four other parishes still in vigil, in Framingham, Scituate, Everett, and East Boston - has set a record in American Catholic history, said Peter Borre, chairman of the Council of Parishes, an advocacy group for parishes facing closure.

The occupation has gone on far longer than anyone imagined, he said.

"If you had asked me 50 months ago, I would have predicted none of these vigil groups would have lasted beyond two Boston winters. We've seen people go from starry-eyed, through all the peaks and valleys, and then prepare for the long haul."

While the groups holding vigils are from different geographic and socioeconomic backgrounds, they are united by "a sense of betrayal over what happened," said Borre. "People are absolutely committed to their parishes, and when suddenly someone wants to close them, it feels like a theft, like a betrayal."

A representative of the archdiocese expressed sympathy with St. James and the other parishes, but emphasized that all of the vigils must end and the state's 1.8 million Catholics must work together to take the entire church into the future.

"We recognize reconfiguration was a painful process, and it was by no means easy for anyone," said Terrence C. Donilon, a spokesman for Cardinal Sean P. O'Malley. "But we are at a point as a Catholic community where we need to heal and rebuild the church in Boston, and an enormous amount of progress has already been made on that path.

"These vigils have to end at some point. It's an issue of fairness to the parishes that are open and struggling to serve people."

The archdiocese has spent $2.2 million on utilities, insurance, and other building costs at all churches that have been in vigil over the past four years. Of that, $236,829 has been spent on St. James alone, he said.

The archdiocese has said it will not move to forcibly close the churches still in vigil while Vatican appeals are pending.

"We are hoping and praying we can find common ground with them," Donilon said. "We need their energy and their help and St. James doesn't need to reopen for them to help us. The church is about the people, not an individual worship site.

"We have been very patient with the vigils because the cardinal cares about these people and prays for them," Donilon said.

Both sides say they want a resolution - but neither is willing to give in.

"I separate my faith in God from the institutional hierarchy," said Kathleen Daly, a longtime parishioner. "But, if anything, this experience has strengthened my faith."

May 2004 Archbishop Sean P. O'Malley announces plans to close 65 of 357 parishes within the Archdiocese of Boston.

October 2004 Protesting the imminent closure of their Wellesley church, St. James the Great parishioners begin a round-the-clock vigil, and plan legal and canonical appeals to keep it open.

January 2006 The Vatican's Congregation for the Clergy upholds O'Malley's decision to close parishes.

March 2006 Massachusetts Superior Court throws out a suit brought by the Maffei family, whose family signed over the St. James land in 1948 under a verbal

agreement that the church would remain open forever, ruling that the First Amendment bars the court from intervening in church disputes.

May 2008 A committee of the Vatican's legal tribunal, the Apostolic Signatura, declines to hear parish appeals.

December 2008 St. James parishioners say they plan to continue their vigil indefinitely. Their appeal to the full Apostolic Signatura is pending, with a ruling expected perhaps by this spring.