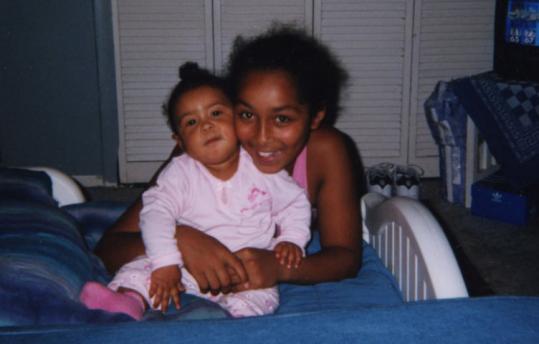 Acia and Sophia Johnson, killed in April in an arson fire, weren't even supposed to be living with their mother.
By Donovan Slack Globe Staff / December 19, 2008
Text size – +

The state agency responsible for children failed at the most fundamental levels to save the lives of two South Boston sisters who survived years of neglect in a home torn by drug addiction, violence, and emotional dysfunction only to die in one another's arms in an arson fire in April, an investigation by the state's new advocate for children found.

Social workers from the Department of Children and Families who visited repeatedly documented neglect of the children, but failed to stop it, the investigation concluded. Caseworkers failed to perform even rudimentary checks with police or other agencies whose information would have clearly signaled trouble. The department's internal records were so poor, the probe found, that officials failed even to "connect the dots" of the information they themselves had collected. Those failures allowed the plight of 14-year-old Acia Johnson and 3-year-old Sophia to go unnoticed, the investigation found.

"By leading lives involved with drugs, crime, and violence, the parents exposed their children to the violence of other people with similar behaviors," Gail Garinger, the child advocate and a former juvenile court judge, concluded in a summary of her report, released yesterday after a six-month investigation. "However, DCF also missed opportunities to recognize the dangers to Acia and Sophia, and to intervene."

The girls died when a fire, which officials say was set in a jealous rage by their mother's lover, swept through the West Sixth Street row house where they lived. The children lived there with their mother, Anna Reisopoulos, even though state social workers had determined five years earlier that she and the girls' father, Raymond Johnson Sr., were unfit parents and gave custody to a grandmother.

Social workers failed to sufficiently document incidences of neglect by the parents dating back to 1995, the investigation found, and the agency did not interview other people involved in the children's lives who could have shed light on the dangers they faced.

"This was really a systemic failure in this case," Garinger said in an interview yesterday.

Garinger made recommendations for overhauling the child protection system, including better training of social workers, drug testing of parents with histories of substance abuse, and improved "methods for assessing and measuring safety and risk." She also said guardianship arrangements, such as limited visitation with parents, should be included in court orders granting custody to guardians, particularly when they are relatives of the parents.

Governor Deval Patrick, who appointed Garinger as the state's first child advocate just days before the fire, said yesterday that he plans to implement her recommendations.

"We will review the child advocate's report and work with relevant agencies to ensure that polices and procedures are in place to offer the utmost protection for children in the care of the Commonwealth," Patrick said.

Garinger's investigation followed a Globe story in June that chronicled the tragic life and death of Acia Johnson, who had seemed to be beating the odds against making a success of herself despite the repeated failures of the state agency that should have rescued her.

Social workers for the department, formerly known as the Department of Social Services, had removed Acia Johnson and her twin brother, Raymond Jr., from their parents' custody in 2003 and placed them with their paternal grandmother, but the children soon returned to live with their mother.

Social workers never realized the children were living at the South Boston house even though the workers repeatedly visited them there, and even though their mother reported they were living there when she applied for food stamps, cash assistance, and housing subsidies. The home was also listed at Acia Johnson's school as her primary residence.

The department would eventually document cocaine use, violent domestic fights, and bizarre incidents, including one in which Acia's father left the girl on the side of the road and led police on a car chase after a traffic stop.

In all, social workers investigated roughly a dozen complaints of abuse and neglect in as many years, including two in the months before the fire. Last February, Sophia Johnson was found wandering outside, alone, on a cold winter day. On March 14, just three weeks before the fire, Reisopoulos chased her son Raymond into the backyard with a hammer. Social workers, notified by police, were called to the scene but took no immediate action.

Over the course of the Department of Children and Families' involvement with the family, the investigation by the state child advocate found, documentation of the incidents was not adequate enough to give social workers a "longitudinal" view of the family's history.

Each time a different social worker took over, it was difficult for the worker to recognize "the depth of the family dysfunction . . . and the corresponding risk to the children," the report says.

Garinger declined to say how many social workers were involved with the Johnson children, but officials have told the Globe that at least three or four had handled the case.

The child advocate also suggests that workers and their supervisors be better trained on reading criminal record reports. Reisopoulos had a five-page record and Johnson Sr., who was in jail at the time of the fire, had a list more than twice that long.

Angelo McClain, commissioner of the Department of Children and Family Services since 2007, embraced the investigation's findings. He has already implemented improvements as a result of the Globe report, including requiring guardians annually to swear under penalty of perjury that children entrusted to their care are living with them. He has also moved to create a program to cross-check guardianship information with agencies that dole out financial assistance.

"We take it seriously that opportunities were missed," McClain said in an interview yesterday. "It's certainly a fair assessment."