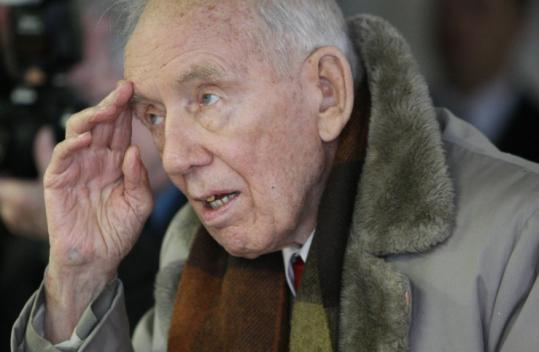 Eight-year-old David Savastano shyly approached Bernard Murphy on the deck of the USS Cassin Young at the Charlestown Navy Yard and asked to shake the old veteran's hand.

"Thank you for your service," the boy said, reaching out.

Wearing a garrison cap with "Pearl Harbor Survivor" embroidered on it, Murphy, 86, who was on the USS Maryland on Dec. 7, 1941, looked down at Savastano, smiled, and shook his hand.

"Thank you for being a good American," he said.

Savastano, of Salem, N.H., said he approached Murphy because he is interested in Pearl Harbor, particularly "what stuff they used, how many soldiers died, and how many survived."

About 50 people gathered yesterday for a memorial service aboard the World War II-era Fletcher-class destroyer docked in the Charlestown Navy Yard, to mark the 67th anniversary of the infamous event that sparked America's involvement in one of the world's most pivotal conflicts.

As the ship's speakers began to play a recording of taps, the traditional call played during military memorials and funerals, veterans, servicemen, and civilians saluted or put their hands over their hearts. As the bugle sounded, Don Tabbut, a Navy veteran who survived the attack, helped drop a memorial wreath into the water. Tabbut spoke to a larger crowd inside the Hull Room in the Navy Yard Visitors Center before the ceremony.

Wearing a black leather jacket with a Leatherneck's Motorcycle Club patch on the back, Weymouth resident George Loring, 56, said the event made him remember "how unprepared we were, despite the fact they had different warnings."

Herb Grogan of Worcester, who teaches strategic leadership at the US Army War College and whose father survived Pearl Harbor, said the most important lesson learned from the attack was the need for the military to improve intelligence, communication, and strategic planning.

"So many civilians don't understand what it's like to be a military person, so this brings it alive," he said after the Charlestown event.

Murphy's daughter, Christine Cross, 52, of Worcester said she was at the event to support not only her father but also her daughter, who is serving in Iraq.

After the event, Commander Dan Gabrielson, captain of the newly commissioned USS Freedom, lauded those who serve.

"The legacy of our Navy and our nation is something that we can't take for granted," Gabrielson said.

Snow fell lightly on the destroyer's deck as Gabrielson explained his new vessel's weaponry to Murphy.

"What's the name of your ship?" Murphy asked.

Murphy turned to the commander and said, "Freedom isn't free."