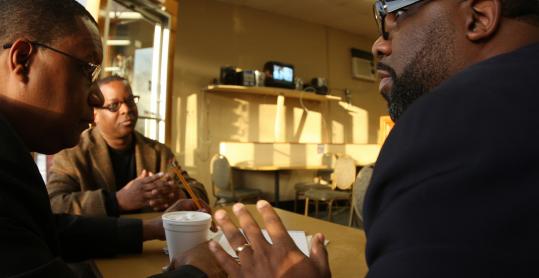 From left, the Rev. Mark Scott, Kevin Peterson, and Ego Ezedi brainstormed during a meeting on how to reinvigorate black politics in Boston on Saturday at Saint's Diner in Dorchester. (Essdras M Suarez/Globe Staff)
By Michael Levenson Globe Staff / December 2, 2008
Text size – +

Rocked by the charges of bribe-taking against state Senator Dianne Wilkerson and Councilor Chuck Turner, black community leaders and activists have begun ambitious pushes to remake black politics in Boston, saying they must forge a new emphasis on ethics and rethink the role race plays if they are to survive as a political force.

In strategy sessions in nightclubs, restaurants, and churches in recent weeks, leaders have begun to search for candidates to challenge the city's entrenched black incumbents. They are also laying plans for changes they hope will make it easier for those challengers to loosen the grip on power held by established forces.

The plans include demanding term limits for local and state office holders, establishing community review boards to grade incumbents on their perform ance and accountability, and advocating for a return to an elected School Committee - once seen as a first rung for aspiring political leaders - instead of one appointed by the mayor.

"I do believe the black community on a real, felt, psychological level is decimated in terms of its politics," said Kevin Peterson, executive director of the Ella J. Baker House, a neighborhood organization in Dorchester. "Clearly, there is a need for the black community to de-align from current practice and levels of accountability and to realign to a new paradigm of governance, which would mean the black community would have to generate a new corps of leaders. The danger is that if we do not realign and develop a new philosophy and practice, Boston's black community would set itself back two or three generations."

A broad spectrum of leaders, from ministers to young professionals and aging activists, are supporting the efforts, saying they were shocked into action by the charges against Turner and Wilkerson. But many said those scandals only heightened a sentiment that has been building for years in Boston's black community, that major changes are needed in the leadership style.

"This is a juncture that we've arrived at," said Ty dePass, a Jamaica Plain writer and activist who took part in a Nov. 20 summit of 40 black activists. "How we define this political moment and what comes after it is going to determine where we end up in 10, 20 years."

Meetings among black leaders - some of them in groups as small as two or three - began after Wilkerson was arrested Oct. 28. The Nov. 20 summit was meant to bring together leaders across generations, from veteran activists such as Charles Walker, who campaigned to make Roxbury a city named Mandela in the 1980s, to George Greenidge Jr., executive director of the National Black College Alliance, who recently launched a series of "Greatest Minds" summits to get black professionals more involved in the city's civic and cultural life. Another large meeting is scheduled this week at the Boston Foundation to more formally discuss strategy.

Many of those involved say the election of Barack Obama as president gave them a template - what Peterson called "a new paradigm of leadership, eschewing racially polarizing tactics and emphasizing collaboration and cooperation."

Implicit in that shift is a criticism of black politicians such as Wilkerson and Turner who emerged from the tumult of the civil rights movement and Boston's busing crisis with a more confrontational style and a pointed emphasis on race.

"There are people whose whole careers have been built on the injustices of what has happened to the black community here in the city of Boston," said Greenidge, 37. "However, I'm from the generation of integration, and we look at the world a lot differently.

New politicians, he said, will have to "make sure the message transcends race, class, gender, socioeconomic background. That's the new game in town."

The movements have not yet produced a slate of candidates or targeted seats, but some people are emerging as key players. In addition to Peterson, Scott, and Greenidge, they include Ego Ezedi, executive director of the Roxbury YMCA, who ran unsuccessfully against Councilor Charles Yancey in 2003 with a campaign that sought support across racial lines by promising a less confrontational relationship with City Hall; Michael Curry, a lawyer at the Massachusetts League of Community Health Centers who has been trying to revitalize the NAACP in Boston; and Kelly Bates, a Roslindale lawyer who heads the Access Strategies Fund, a Cambridge nonprofit that provides grants to groups trying to increase voter participation.

Some of the aspirants point to role models who have already won elected office, such as state representatives Linda Dorcena Forry and Marie St. Fleur, both Dorchester Democrats.

The force of the most recent movement, however, is generating tension with some who say the new crop of potential leaders comes across as naive and who question whether those leaders are prepared.

"This new crew wants to come up, and it's not clear who they are, what this new crew is, and what it's going to be able to do," said dePass, 59, who has followed Boston politics since the 1960s, when he was an antiwar and antipoverty activist. "And it's certainly not clear that they're prepared to step up. A lot of the history of the black community in Boston they have no clue on."

He and others also say the desire to downplay race, while admirable, is foolhardy in the battlefield of politics, particularly in Boston, where ethnic and racial politics have long ruled.

"Taking race off the table and trying to build a broader appeal among whites, and white liberals in particular, has its problems because the issue of putting aside race means one of the key drivers of this society is not going to be discussed," dePass said.

Still, many in the older school of Boston's black leadership said it is time for a passing of the torch.

"You have this incredible group of young people who are saying, 'It's our time, when can we play?"' said Horace Small, executive director of the Union of Minority Neighborhoods. "At some point, it becomes clear that we as a generation have done all we can do, and the time comes when it's time to promote this generation. It's time for us to say, 'You've seen our work. You've seen our mistakes. Now it's time for you to step up.' "