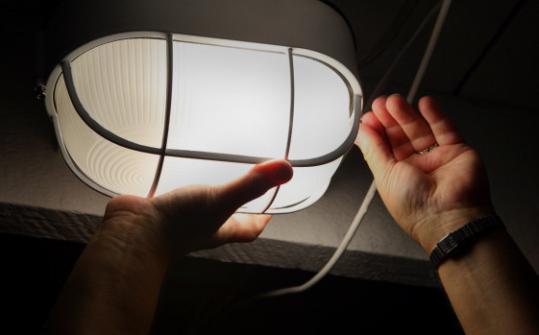 A lthough Nancy Tauber wants to do her part to counter climate change as much as the next citizen, she admits that she and her husband, Tony, aren't exactly the handiest people.

So when the Cambridgeport couple heard about volunteers who weatherize houses to make them more energy efficient, the Taubers offered their Chestnut Street home and invited dozens of strangers to insulate pipes in the basement and install weather stripping under the door frames. All the Taubers had to do was supply the materials - and provide food and drinks for the party and jam session that followed. The labor was free.

"It feels like having a bunch of fairy godmothers and godfathers around," Nancy Tauber said in her kitchen two weekends ago, as a man wearing a tool belt explained to a middle-aged woman how to insulate an outlet. "Who wouldn't want something like this?"

The Taubers - along with Susan Shelkrot and Eric Kupferberg two houses down - were participating in a "barn-raising event" organized by the Home Energy Efficient Team, or HEET, a Cambridge-based co-op that sprouted from a neighborhood organization called GreenPort. The purpose of both groups, according to co-founder Steve Morr-Wineman, is to bring neighbors together to respond to the environmental crisis.

The idea of a barn-raising comes from a more rural time when a community mobilized to help a family build a barn. HEET has adapted the concept to a big project that needs many hands. Neighbors work together to weatherize homes, and, in the process, learn skills to use in their own houses.

"On the surface, one house a month doesn't make a big difference," said Morr-Wineman. "But it's like a workshop - people learn the skills to weatherize their own homes, and our hope is that it has a multiplier effect."

HEET was founded in June, and word spread fast through blogs. The first barn-raising was held Aug. 10.

"Forty people showed up to the first one - we couldn't believe it," said Morr-Wineman.

A barn-raising begins when the homeowners chosen as hosts meet with HEET members to assess what can be done to reduce heating bills.

Audrey Schulman, a cofounder of HEET, then gathers skilled team leaders - some contractors, others handymen - to guide the often unskilled volunteers through the work.

At the day's inception, the leaders explained to the group of 40 on what part of the project they would work.

"The leaders are really into it - it wasn't hard to find people who wanted to help out," Schulman said.

The leaders also act as supervisors to reduce injuries, according to Schulman. Power tools are not used, no one is on ladders, and all participants sign a liability waiver at the beginning of the day.

"No injuries so far," said Morr-Wineman. "We're pretty careful - we also won't do any sanding where there's a possibility of lead paint."

The Taubers didn't seem daunted in the least by the constant foot traffic of strangers through their house, picking at their pipes and applying caulking.

"It's great," said Tony Tauber, who estimated he and his wife spent close to $400 for the supplies. "I understand why people want to host it, but I'm really impressed by the number of people willing to teach and learn."

"No, I don't know many of these people," said Nancy Tauber, looking around. A young woman passing through the kitchen promptly introduced herself with a smile.

Later that day, the Taubers brought out their spread of food, and musicians with a keyboard, fiddle, and bass played in celebration of the day's end.

"These events are really interchangeable as barn-raisings and parties," said Morr-Wineman. "People enjoy just getting together and meeting one another - this whole thing has a real community-building element."

"On one hand, this whole thing is very Cambridge," said Morr-Wineman. "But it's happening in Plymouth, N.H., too. I've heard word of other barn-raisings across the state, from Newton to Northampton. This sort of thing is an example of real Americana."

Now, HEET is trying to organize a barn-raising at the Cambridgeport School.

"The principal has approved it, and we're hoping to get 50 to 75 people there sometime in January," said Morr-Wineman.

The white-haired activist, who turns 60 next month, is almost giddily optimistic about the barn-raisings.

Jennifer Schwartz can be reached at jensch72@gmail. com.