Clergy brace for downturn in giving 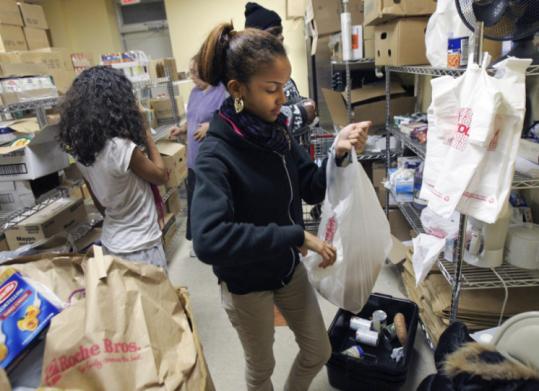 NORTH ANDOVER - The crumpling economy and plunging financial markets have demolished trillions of dollars in stock value, and now they've taken a toll on the pink stucco church on Main Street.

A decision by the three priests of St. Michael's Church - the largest parish in the Archdiocese of Boston - to halt construction of a long-planned $5.2 million pastoral center is one small indicator of the enormous challenges now being faced by religious denominations and congregations throughout the region as their endowments fall, their donors' stock portfolios evaporate, and requests for help grow.

The next few weeks, between Thanksgiving and New Year's, will be a key indicator of how dramatically the nation's financial crisis will affect religious organizations. Contributions to date have been stable or up for many denominations and congregations, but this period is the high season for American philanthropy, in part because people are motivated by the spirit of Christmas to be charitable, and in part because people are try ing to amass tax deductions as the year closes.

"Seventy percent of our budget comes in December, so we live by faith, or by hope," said the Rev. Jim Antal, president of the Massachusetts conference of the United Church of Christ, which is the state's largest Protestant denomination. Antal has summoned all clergy to a January gathering for a brainstorming session about pastoring congregations during a downturn. "I can't tell you what's going to happen," he said.

But even before the baskets are passed and the pledge envelopes opened, many religious leaders are bracing for a difficult next year, when, they believe, unemployment is sure to rise.

"A lot is going to depend on December, because a lot of our pledges typically get paid by the end of December because of the tax impact," said Barry Shrage, the president of Combined Jewish Philanthropies. "And we're expecting a very difficult campaign [next year]. We know people are losing jobs, and it's not necessarily people at the bottom end - it's people who are [major] contributors."

Here in North Andover, the clergy decided not to wait to find out. St. Michael's is one of the biggest success stories in the archdiocese - the fast-growing parish has 5,200 registered families, average weekend attendance of 3,000, 2,000 children in religious education and another 520 at the parochial school. Just a decade ago, the parish raised $10 million to build a new church with stadium seating, and for the last 18 months parishioners have been laying the groundwork for the project to demolish their old convent and replace it with a three-story pastoral center that would provide space for 60 parish programs.

But a few weeks ago the clergy here decided the economy has gotten so bad that they didn't feel right asking their parishioners to pony up the multimillion-dollar tab. So they have shelved the project, indefinitely.

"How can we ask them to pledge for three years, when they're losing their jobs and their stock portfolios are poor?" said the Rev. John Delaney, one of the parish's priests. "Now is not the right time to proceed."

For religious organizations, the nation's economic woes hit twice. The faith groups rely for income on sources vulnerable to a downturn - contributions from individuals, income from investments, and, in the case of faith-based social service organizations, funding from government. But the faith groups also aspire to assist the hungry and homeless and unemployed, meaning that during a recession their expenses go up even as their revenue may go down.

Multiple congregations and denominations are planning for things to get worse. Jewish synagogues are reviving congregation-based job networks that were last used during the real estate recession of the early 1990s, and the Episcopal Church is setting aside money to help congregations that get into trouble.

Many organizations are also already cutting. The Catholic Diocese of Worcester has imposed new restrictions on building projects. The Unitarian Universalist Association has put off planned maintenance work on its Beacon Hill headquarters. The Archdiocese of Boston has been steadily cutting staff. The Episcopal Diocese of Massachusetts has cut staff and spending. And religious colleges are cutting too, including, most recently, Gordon-Conwell Theological Seminary, an evangelical institution on the North Shore that announced Monday it was laying off employees and reducing spending.

Many clergy believe that religious philanthropy, especially at the local level, tends to be more resilient than other forms of charitable giving during a recession. But they note there is no exact precedent for the current economic crisis, making forecasting the impact this time speculative.

"Perception and fear are a greater concern now than the real economic problem, and the fear of things getting worse will probably dominate people's reaction," said Chuck Zech, a professor of economics who studies church finances at the Villanova School of Business.

Zech said that denominations are being hit harder than congregations, because denominations rely more on investment income, whereas congregations are mostly funded by direct contributions. And he said that Catholic parishes are likely to suffer more than Protestant congregations, because Catholic parishes tend to depend on weekly collections that are affected by ups and downs in the economy, whereas Protestant churches tend to rely on either pledges or tithing, which are often viewed as more of a commitment by donors.

At the denominational level, everyone says they are taking a hit because of the impact of the market on their endowments.

"We are exposed to the markets just like any other investor, so our endowment is down, our retirement fund is down significantly, and we're the beneficiary of several outside trusts that are down as well," said Tim Brennan, the treasurer of the Unitarian Universalist Association, which is based in Boston. "Everything is down these days, and that will affect future years - we will have less resources to draw upon."

The revenue picture seems mixed. At the New England conference of the United Methodist Church, revenues are down 8 percent from last year, said conference spokeswoman Alexx Wood. Wood said some congregations are reporting increased giving, and says, "it's counterintuitive, but history has shown that when times are tough, people respond with generosity."

The Roman Catholic Archdiocese of Boston expects giving to be "off a bit this year," but "we're more concerned about next year than this," said archdiocesan Chancellor James P. McDonough. Giving to parishes, he said, appears steady.

McDonough said Catholic organizations in Massachusetts, most of which invest their money together, had some good fortune - because of a decision to replace some of the Catholic investment pool's managers, an unusual amount of the holdings had been converted to cash just before the market tanked. But the archdiocese has had several real estate deals fall through because buyers couldn't get financing, McDonough said.

"Like everyone else, we've taken our lumps," he said. "But we're taking a very long-term view - the church has been around for 2,000 years."

In the Jewish community, synagogue administrators are worried. "I'm hearing tremendous concern," said Alan Teperow, executive director of the Synagogue Council of Massachusetts. "People in congregational leadership are concerned about the livelihoods of their members, the emotional well-being of their members and how that's going to affect them and their families, and ultimately whether that might affect the synagogue itself if people are unable to pay their dues."

"Requests for help are up, no question," said Tiziana Dearing, the president of Catholic Charities for the Archdiocese of Boston. Dearing said her organization is facing increased requests for assistance; among its responses has been to add extra hours for its food pantry at its Yawkey Center in Dorchester. Dearing said direct-mail fundraising is running higher than last year, and that attendance and fund-raising events has held steady, but that state funding, which makes up just over half of the organization's budget, is being cut. "At the big giver level, it's a little early to tell, and our concern is corporate giving, because we have huge donors who have lost 30 to 40 percent of their portfolios this year."

Lutheran Social Services reports a significant increase in waiting lists for affordable housing that the organization manages, and is also facing program cuts as a result of state budget problems, according to Heather Feltman, the organization's chief executive. Feltman said her organization's fund-raising is up this year, but, she adds cautiously, "so far."

The Church of Jesus Christ of Latter-day Saints provides a particularly direct barometer of economic woes, because Mormons place a strong value on avoiding government assistance, and try to help their own unemployed members rather than rely on welfare. Clayton Christensen, a top Mormon official locally, said the church's funds for helping its own members "are already getting taxed to the limit."

"Unemployment is rising, and my personal bet is that we're going to see 15 percent unemployment within a year," said Christensen, who in addition to his volunteer role with his church is also a professor at Harvard Business School.

Michael Paulson blogs about religion at www.boston.com/religion, and can be reached at mpaulson@globe.com.