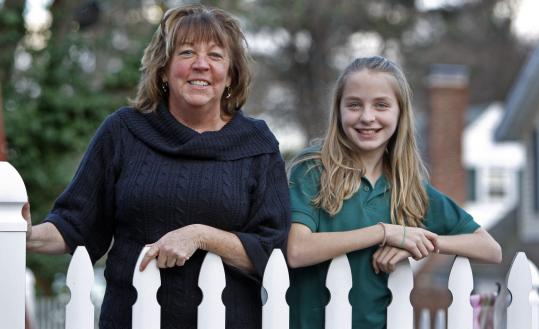 If she could deliver a message to the anonymous sperm donor who helped give her life, 11-year-old Hannah Dudley-Youngs says she would tell him: "I promise not to bother you if you want to be left alone. But I'd like to learn more about you. Are you healthy? Are you nice? Maybe we could even meet someday.

"Mostly," Hannah imagines saying, "I just want to make sure you know I exist."

Hannah's mother, Kathy Dudley-Youngs of Reading, chose the donor in 1996 because his Xytex Corp. sperm bank profile made him sound like a "regular guy" who would have fit well into her warm family - a physical education teacher who described his mother as "the most giving and unselfish person I know." That he wanted to remain anonymous, like most donors, seemed no major problem.

Little did she know. As Hannah and thousands of other children like her grow up, the first generation of donor-conceived offspring raised with openness about their origins, some are challenging the secrecy that has traditionally cloaked sperm donation. And their voices are helping to fuel a rising debate over whether donors should be allowed to remain anonymous.

"I think people have the right to know who is in their family and who their mother and father and sisters or brothers are," Hannah said.

The main defenders of anonymity are major sperm banks. They argue that they must honor their promises of privacy and that supplies of donor sperm will drop dramatically if anonymity is barred.

Earlier this month, a top British medical journal reported that following England's decision to ban anonymity in 2005, once-plentiful supplies of sperm are running so low that some clinics report two-year waits.

The debate pits donor-conceived children seeking information against donors seeking to maintain anonymity, and "the crux of the issue is, whose rights trump whose?" said Wendy Kramer. She is cofounder of the Donor Sibling Registry, an online entity that has helped at least 5,900 donor-conceived people connect with half siblings or with the donors themselves by matching a donor's sperm bank ID number or other information.

The issue will soon be fought out in a Canadian court. On Oct. 24, Olivia Pratten, the 26-year-old daughter of an anonymous sperm donor, filed that country's first class-action lawsuit on behalf of donor-conceived offspring. The suit asks that all donor records be preserved - currently, they can be destroyed after six years - and that offspring be granted the same right to access as adopted children have to the records of their birth parents.

No such suit has been filed in the United States, where more than a dozen states, including Massachusetts, have passed laws in the last few years allowing most adult adoptees to gain access to their birth records.

Pressure for greater openness has been mounting, however, said Susan L. Crockin, a Newton lawyer who is a leading national specialist on reproductive law. At a conference this month of the American Society for Reproductive Medicine, a formal effort got underway to create a national registry of donor-conceived births.

It would be called the National Gamete Donor Registry, said Dr. Charles Sims, medical director of California Cryobank, who is involved in creating it. The country's handful of major sperm banks support the idea, he said.

The registry would aim to preserve donor records; to reduce the risk that a donor-conceived person might accidentally get involved in a relationship with a half brother or sister; and to offer access to long-term health information about donors, who could update their records periodically. As currently planned, it would not require donors to be identified to their offspring.

It would be voluntary at first, Sims said, but could evolve to be mandatory.

Kramer said the national registry plan falls short because it would allow continued anonymity and records might be spotty; currently, fewer than half of donor-conceived births are reported back to sperm banks, she said.

From Sweden to England to New Zealand, other countries have created independent bodies to run mandatory registries, she said. "The question is, what's in the best interests of the child being born? In many other countries they've asked that question, and country after country ends donor anonymity."

Sperm donation was long a hush-hush business, used mainly by private doctors to help women whose husbands were infertile. But in the last two decades, it became much more commercial, offering catalogs of donors directly to would-be parents, even photos and audio and video recordings. And it began to serve two populations that were far more open about their methods of conception: single mothers and lesbian couples.

At the same time, psychological research increasingly suggested adopted or donor-conceived children did best emotionally if they were told early about their genetic origins.

There is no official count of how many donor-conceived children are born each year, but Sims estimates that at any one time, there are 10,000 to 15,000 sperm and egg donors nationwide, and there may be a total pool of about 25,000 to 45,000 past and current donors. Their progeny probably number in the tens of thousands overall.

The push for openness stems in part from the curiosity some feel about their biological roots, as an element of their identity. But there is also a medical aspect: If a child falls ill, a family may need more information about that child's genetic heritage than an initial - and perhaps outdated - donor profile provides.

When Hannah was 7, she had increasingly frequent, violent headaches, and finally a brain scan revealed a small cyst. Dudley-Youngs called Xytex to see whether the bank could ask the donor about anything that might be relevant. But because Hannah's problem was not clearly genetic and not life-threatening, Xytex declined, Kathy Dudley-Youngs said.

As Hannah and her mother were being interviewed at their kitchen table last week, Hannah often pressed her hand to her forehead, and she quietly slipped herself a Motrin capsule to ease a headache.

"Let's just say I did make a mistake in picking an anonymous donor," said Dudley-Youngs, a single mother who had Hannah after a divorce. "Say I was wrong. Is that Hannah's fault?"

Hannah and her mother have been looking online for the donor with the clues they have from his sperm bank profile: His Xytex donor number was DGM 2598. He was 19 and already married when he donated at an Augusta, Ga., clinic in 1989. He had dark blond hair and dark brown eyes. His favorite book was Jurassic Park, and his SAT score was 1140. A brother died in a plane crash at 27.

But they have not searched as aggressively as they could, worried about possible rejection. In an essay in his file, the donor wrote, "The child will hopefully never know that I exist."

The debate over donor anonymity has a middle ground: the growing trend for donors to sign up for an "identity release" program, meaning that offspring can contact them upon reaching age 18.

The majority still want to remain fully anonymous. For example, out of 136 donors at New England Cryogenic Center in Newton, 38 have chosen to have their identities released, said sales manager Maureen Burke.

Among donors and offspring who have found each other through the Donor Sibling Registry, most feel "overwhelmingly positive" after some ticklish starts, Kramer said.

"Once people connect," she said, "it's a delicate dance figuring out, 'Who are we to each other?' "

Carey Goldberg can be reached at goldberg@globe.com.