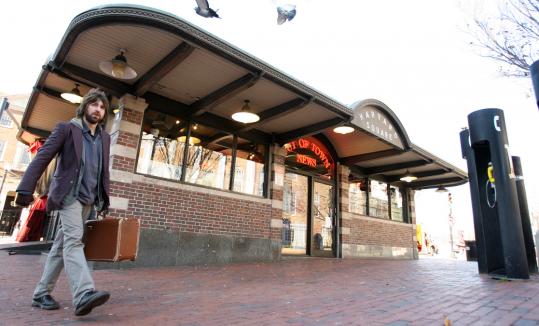 CAMBRIDGE - John Kenneth Galbraith bought a copy of Le Monde there every day. Julia Child searched for obscure Italian and German cooking magazines, and Robert Frost once stopped by - it actually was a snowy evening - to get directions to a reading. Over the years, pretty much anyone looking for news from far and near, be they eminent professors or the masses rushing to work on the Red Line, found it at Out of Town News.

But the landmark shop, an axis at the center of Harvard Square's bustle, may be about to go away.

The owner, now a chain vendor, has notified Cambridge officials that it does not plan to renew its lease Jan. 31, saying the public appetite for printed news has all but vanished.

"It is not the profitable location for us that it once was," said Laura Samuels, spokeswoman for the owner, Hudson News of East Rutherford, N.J.

The possible demise caused shock and dismay yesterday in Harvard Square, where shoppers took it as a wrenching sign of a rapidly changing world, where print news is dying and chain stores have taken over, even in a square once celebrated for its eclectic diversity. To many, Out of Town News had seemed an unmovable part of the Harvard Square experience, as likely to disappear as Harvard University's wrought iron gates across the street.

Worried city officials were scrambling to find another news dealer and planning to reduce the $5,000-a-month lease substantially in hopes of enticing bidders. "There are traditions that belong in Harvard Square," said Robert W. Healy, the city manager. "That's one of them."

But he acknowledged the quest could be fruitless, given the dwindling market for print news, and some city officials and business leaders have already proposed alternatives they say would live up to Cambridge ideals, like a depot for bicycle sharing, or a late-night café.

"It could be that we're chasing moonbeams," Healy said of the search for a news vendor, "and we'll have to look at our re-use options."

But such ideas are anathema to those who made Out of Town News part of their daily routines, or who remembered the shop's heyday, when it sold more than 200 newspapers from across the country and the world, hawking everything from Der Spiegel and Corriere della Serra to the Montgomery Advertiser.

Founded in 1955 by Sheldon Cohen, who started out hustling newspapers in the subway with his father, Out of Town News moved in 1984 to its current home, a handmade brick and limestone shelter with vaulted wood ceilings that was built in 1928 as an entrance to the subway. It is now on the National Register of Historic Places and, according to the city, is an "internationally recognized symbol of Harvard Square."

Learning from a reporter yesterday of Hudson's plan to vacate the location, Cohen wept and recounted the years he spent running the business, arriving at 4 a.m. each day, "freezing my you-know-what off" in the winter.

"It hurts; it really hurts," he said. "When it's in your blood, to see something destroyed like this, it breaks your heart."

"I knew at some point this day was going to come," he said. "But I wasn't prepared this soon. I thought it had a few more years in existence. Apparently not."

Sheldon Cohen, now 77, sold the kiosk in 1994 to Hudson News, which operates newsstands in 70 airports and transit terminals across the United States and Canada. The city has since installed a commemorative plaque proclaiming the brick median where the shop sits "Sheldon Cohen Island."

Like the Cohens, people browsing the aisles yesterday took the news hard.

"That's the first bad news I've heard since the election," said Gretchen O'Connor, who has been coming to the shop since the 1960s when her husband, John, was a Harvard graduate student. "I don't even like magazines, and I love coming here."

"It represents the intellectual atmosphere of the city," said Larry Cabot, a 73-year-old Cambridge native who rode his bicycle to the kiosk window for a newspaper yesterday. "And every time you do something to take that away, it's too bad."

Andrew Udden, who has been coming for 25 years to buy the Times Literary Supplement, said Harvard Square would never be the same. "I just can't imagine it without this," he said.