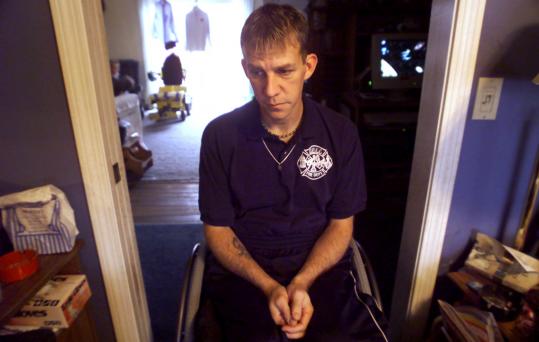 At John Clasby's funeral yesterday, firefighters from more than 65 departments statewide paid their respects in St. Ann's Church in Hull. Clasby (above), a Hull firefighter, died Veterans Day at South Shore Hospital because of injuries sustained at a fire in June 1999. He was the department’s first "line of duty" death in more than a century. He was 46. (David L. Ryan/ Globe Staff/ 2000 File)
By Gabrielle Dunn Globe Correspondent / November 18, 2008
Text size – +

Firefighter John Clasby was out to lunch with one of his children when he got the page about the four-alarm inferno and was one of the first on the scene.

It was early afternoon on June 29, 1999, in Hull. Four houses were being gutted by a blaze at the intersection of Clifton Avenue and Nantasket Road. Abetted by the strong summer winds, it would become the most destructive fire in the town's history - in more ways than one.

Clasby surprised friend and fellow firefighter Robert Neal, who recalled running with him to the backyard of a house where live wires sparked against a basketball rim.

"It was like he was electrocuted," said Neal, who suffered a heart attack at the scene.

At the time, the department thought the three bangs came from shrapnel exploding off a metal propane tank. However, they later learned Clasby was hit by a bullet. "That's where it ended, the poor guy," said Neal, 64, a lifelong Hull resident.

Clasby never found out where the bullet came from, and doctors discovered it only five months later. It severed his spinal cord, paralyzing him from the waist down. He used a wheelchair for the last nine years of his life.

He died on Veterans Day at South Shore Hospital, becoming the department's first "line of duty" death in more than a century. He was 46.

State Police list their findings on the case as "inconclusive."

John "Jay" King, a childhood friend and Clasby's firefighting partner of a decade, was also at the Clifton Avenue blaze. The pair grew up together in the neighborhood and both graduated from Hull High School.

"He'd do anything for anybody. He would give you the shirt off his back, trust me," King said Friday.

That summer, Clasby spent three weeks recuperating at Brigham and Women's Hospital, according to a 2000 state Senate report on fires started by cigarettes, the cause of the Clifton Avenue blaze. Clasby testified he felt pain "24 hours a day, 7 days a week."

He was often in and out of the hospital, said his older sister, Michelle Clasby Brennan. He ultimately died of infections from his wounds.

"We knew he'd been sick but he was such a strong fighter emotionally and physically that each time he went to the hospital, we were sure he was coming home," she said. "We were sure this time, too."

The tragedy touched a nerve in the town of about 11,000 people. The Clasbys are also lifelong and well-known Hull residents, Brennan said.

When he was injured, Clasby was divorced and living at his childhood home with his mother, Janet; twin sons, Sean and Daniel; and an older daughter, Jamie.

Before his injury, Clasby, an athletic man with a thin face that set off his smiling eyes, played hockey and softball.

In the years after his release from the hospital, the town gave Clasby, a 10-year department veteran, a hero's welcome, holding frequent fund-raisers and benefits in his honor.

In 2000, Neal and Clasby were honored with the Governor's Medal of Honor, the state's highest award.

At Clasby's funeral yesterday firefighters from more than 65 departments statewide and about 1,100 people paid their respects at St. Ann's Church, Hollingshead said.

Despite his disability, his sister said Clasby remained hands-on in the community, giving back to those who gave to him. More so, Brennan said he made a special effort to be an exceptional, involved father.

When it came time to teach his children how to ride bikes, he rode beside them in a motorized cart, instructing the entire way.

"He was at all their games and functions. He missed nothing," Brennan said.