Actively offering faith for all 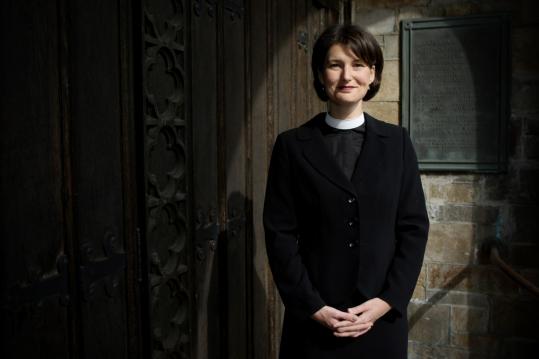 Sunday evening services at Cambridge Welcoming Ministries are small, intimate affairs where the Hymn of Praise begins "Omnigender God who transcends all convention."

The congregation of 20 to 30 meets in the Sunday school room of the College Avenue United Methodist Church, an imposing stone building with high, gabled ceilings and steel-hinged wood doors. During services, congregants sit in a semicircle and praise Saint Perpetua and Saint Felicitas, "martyred women whose love and faith sustained generations of Christian hope"; and Saint John, "whose gender identity blurred convention and revealed your presence among us."

Cambridge Welcoming is a mission of the United Methodist Church that ministers to gay, lesbian, bisexual, and transgender Methodists, people unlikely to worship with another congregation. Their purpose is seemingly at odds with the teachings of the United Methodist Church, whose governing document, the Book of Discipline, says the church "does not condone the practice of homosexuality and consider[s] this practice incompatible with Christian teaching."

Like most major religious groups, the United Methodist Church has been struggling with the issue of homosexuality for years. Cambridge Welcoming was born from that conflict.

In 2000, Tiffany Steinwert and David Kim protested the Methodist Church's position on homosexuality outside their General Conference. Nearly 200 people were arrested that day, Steinwert and Kim among them. The pair didn't think the protest brought sufficient attention to the issue inside the conference, and the next day they disrupted the proceedings and brought the conference to a halt.

Steinwert, who is heterosexual, came away from those events convinced "the issue of sexuality had stopped the church from being the church." When she and Kim returned from the conference, they began a series of house meetings and discussions aimed at founding a new congregation that would minister to those who felt alienated by the church.

It took two years for their plans to come to fruition. In 2002, Steinwert and Kim co-founded Cambridge Welcoming Ministries as a mission of the Methodist church, complete with official imprimatur. Missions are groups designed to reach out to communities of people with no permanent or regional base.

Two years after the group was founded, however, its existence was threatened. At the 2004 General Conference, members prohibited church funds from being used to promote homosexuality. Shortly after the conference, a member of the New England Conference of the Methodist Church used the new rule to challenge the funding that Cambridge Welcoming relied on. The mission was saved when their bishop determined that Cambridge Welcoming promoted the gospel, not homosexuality.

"The climate was harsher" when the mission was started, Steinwert says. In years past she regularly received hate mail, some saying she would spend eternity in hell. Kim left the congregation in 2005, making Steinwert the group's only pastor.

Since 2004 there have been no direct challenges to the congregation. As they enter their seventh year, Steinwert believes the mission is safe because, "We do work of ministry that other folks find it difficult to do."

Work like ministering to people whose very identity threatens the liturgical understanding of many church leaders.

While in San Francisco recovering from gender transition surgery, Sean Delmore found himself with no place to stay. He was traveling with a friend who suggested calling her pastor in Boston for advice, a suggestion Delmore did not take seriously. The friend called anyway, and within an hour the pair received offers of shelter from several local church members.

After his recovery, Delmore returned to Boston and visited Steinwert, the pastor who had called on his behalf. Though Delmore was not a Christian, there was a name tag and a chair waiting for him when he arrived at Sunday service.

Since that first visit, Delmore became a Christian and an active member of the congregation. He dedicated himself to Cambridge Welcoming, in part, as a way to reclaim the debate over sexuality from the secular community. "Anti-gay messages are grounded in religion, and battling those messages on the same ground is critical," Delmore says.

Members of the New England Methodist Church's hierarchy freely admit that homosexuality is an issue within the church, but are quick to say that Cambridge Welcoming is accepted.

"Of course homosexuality is an issue, as it is with all mainline denominations," said Martin McLee, district superintendent of the Metro Boston Hope District. But, he adds, "I don't see Cambridge Welcoming's existence as controversial." He describes the congregation as "vital" and says, "They're actively seeking disciples of Christ."

Peter Weaver, bishop of the New England Conference, says the Methodist Church does not support the practice of homosexuality. But, he adds the church believes that "ministry has to be offered to all persons. Cambridge Welcoming is an excellent example of that."

When Cambridge Welcoming turned six last month, they began a year of rest and reflection. They will use the time to debate "who are we, what values we embody," Steinwert says.

Though the congregation's position is stable, Steinwert's might not be. As the church continues to struggle with the issue of sexuality, it's possible Steinwert could be charged with promoting homosexuality and lose her position in the church.

Even if her support for an inclusive practice of her faith abridges her career, Steinwert says, she will not regret it. "When I look back, this will be a moment in time when I'm the most proud of who I am and what I've done," she says.